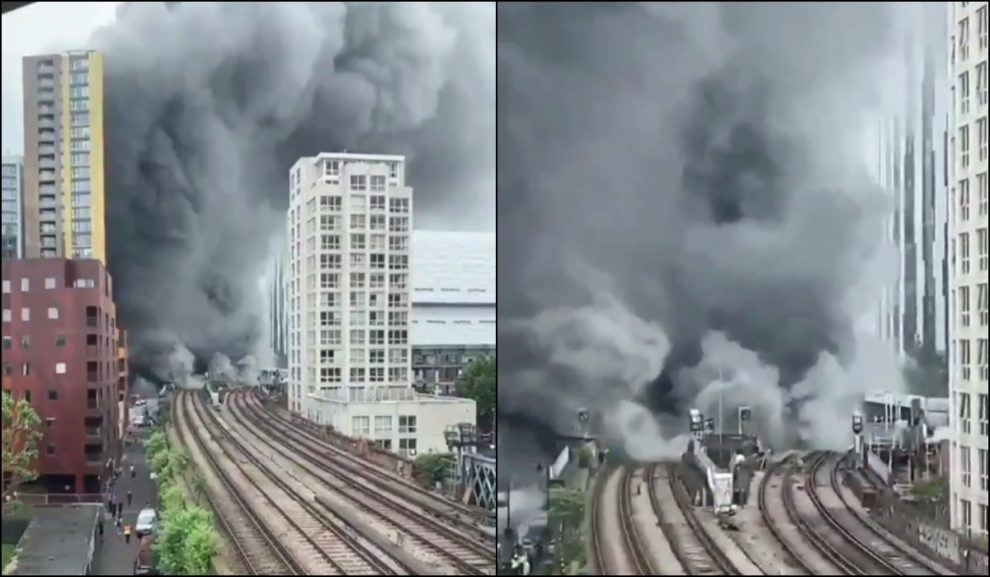 On Monday afternoon, a fire ball erupted at London’s Elephant and Castle district, according to videos posted on the social media.

Smoke could be seen billowing from the station and up towards large residential tower blocks.

More than 70 firefighters are currently on the scene, with reports indicating that four cars near the station caught fire first.

It is unknown if anyone was injured in the incident.

Footage from the aftermath shows massive plumes of black smoke blanketing the city.

The cause of the fire is unknown at this time.

A Metropolitan Police spokesman said ‘at this early stage, the incident is not believed to be terror-related’.

Officers and the London Ambulance Service are on the scene assisting the London Fire Brigade. Significant road closures are in effect, and the public is advised to avoid the area. The station has been evacuated, and residential evacuations are currently underway.

Three commercial units underneath the railway arches are completely alight and four cars and a telephone box are also alight near #ElephantandCastle Railway Station. Road closures are in place and people are advised to avoid the area and keep windows and doors closed.

London Fire Brigade has sent a new tweet to update on the fire situation:

There are now 15 fire engines and around 100 firefighters tackling the fire in #ElephantandCastle. Our 999 Control Officers have taken 44 calls to the blaze

Top 10 videos of the fire near Elephant and Castle station

I had to evacuate my flat and only a few seconds to film this. #elephantandcastle pic.twitter.com/vr4HCYN35k

🚨 | NEW: Lots of smoke at Elephant and Castle station

BREAKING: A fire at Elephant and Castle station has covered the area in a thick smoke cloud. Emergency services are attending the scene. pic.twitter.com/bRYzOypglv

Garage blow up in elephant and Castle. pic.twitter.com/7KTtXyM9ON

Ok actually this looks serious, hope no one’s been hurt. I assumed it was the building works but looks nearer Elephant and Castle station pic.twitter.com/eblXDIyFfI

US, UK, Australia to cooperate on hypersonic weapons