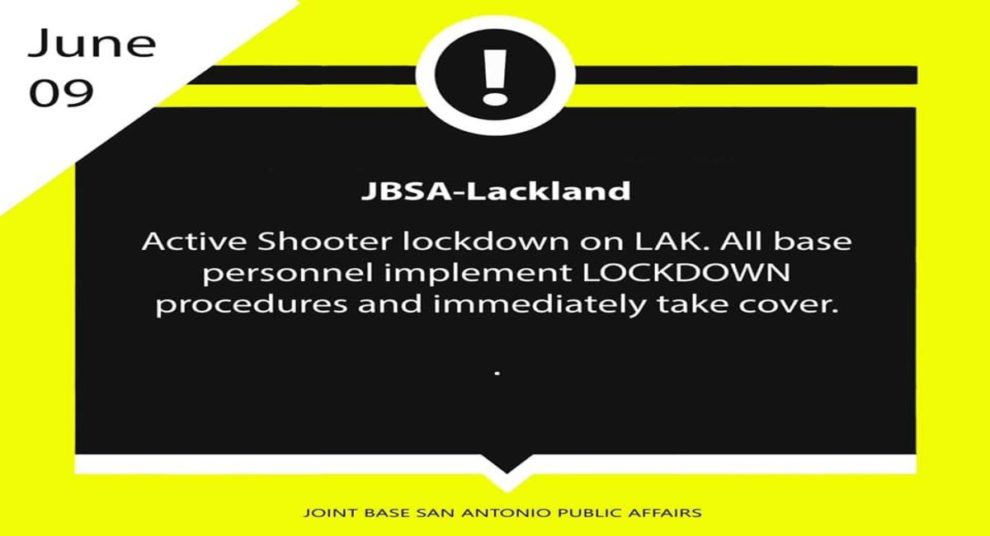 According to local officials and witnesses, security forces are responding to reports of a “active shooter” at Lackland Air Force Base in San Antonio, Texas. The base has been placed under lockdown.

Just before 12:30 p.m., base officials issued an alert to all base personnel informing them of the situation. The lockdown was confirmed by base public affairs.

⚠️🇺🇸#URGENT: Active shooter confirmed at Lackland Air Force Base in southwest San Antonio#SanAntonio l #TX
Mass amounts of emergency personnel are responding to this incident. The shooter has fled the base.
Police are warning all nearby residents to remain indoors at this time. pic.twitter.com/dYhxzJmTqQ

According to local media reports, San Antonio police and Bexar County sheriff’s deputies are on the scene.

According to reports, there were two shooters off base who shot towards JBSA-Lackland near The Valley Hi gate. The shooters fled on foot and SAPD, JBSA emergency responders are working to clear the area and find them.

Lackland Air Force Base in San Antonio serves as a base for Air Force basic training.

Texans brace for dangerous blast of cold, wind and snow