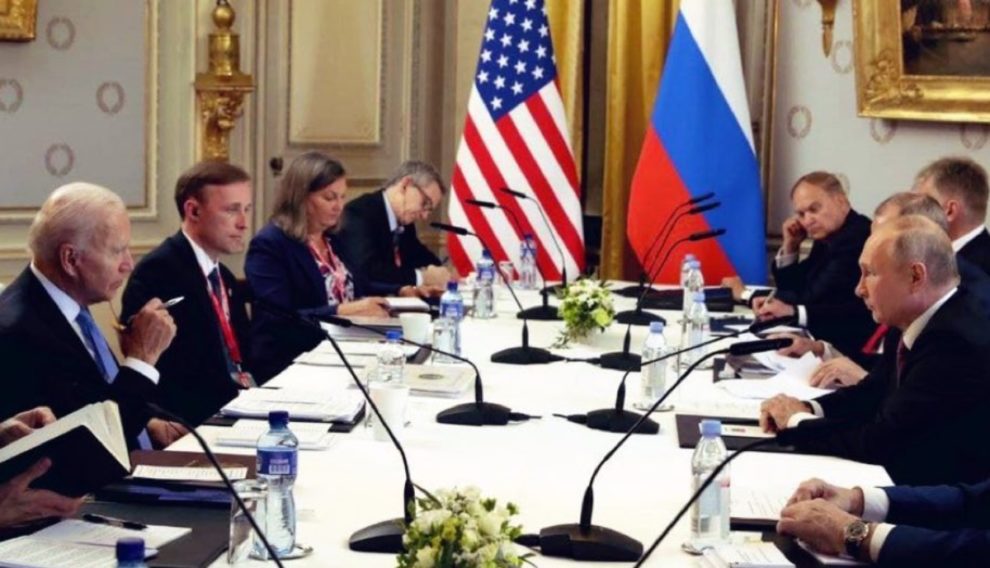 Anti-nuke campaigners around the world expressed frustration on Wednesday after U.S. President Joe Biden and Russian President Vladimir Putin met in Geneva and released a joint statement but did not commit to cut down their nations’ nuclear arsenals—let alone full disarmament.

“Following the Geneva summit, Presidents Putin and Biden have made no further commitments to reduce their nuclear arsenals in line with the Treaty on the Prohibition of Nuclear Weapons and global opinion,” said Beatrice Fihn, executive director of International Campaign to Abolish Nuclear Weapons (ICAN).

“We need to see actual disarmament progress from the countries with the world’s largest nuclear arsenals,” she asserted.

The risk of nuclear weapons use is higher than it has ever been, due in part to cybersecurity concerns the presidents discussed. This weapon of mass destruction spending reached new heights at $72.6 billion in 2020. And we know that the consequences of use would be catastrophic.

ICAN won the 2017 Nobel Peace Prize for its campaigning, including efforts that year to raise support for the United Nations Treaty on the Prohibition of Nuclear Weapons, which bans such weapons under international law and entered into force this January—without support from the U.S. or Russian governments.

“The presidents acknowledged in their joint statement that even in times of tension, the two countries had made progress on reducing the threat of nuclear weapons in the past,” said Fihn, “but this summit fell short of making significant progress towards that aim.”

Biden and Putin both speak on the need for increasing stability, "mutual rules of the road", yet we continue to build new nuclear weapons that increase the chance of mistake or miscalculation. It is critical Biden's upcoming NPR cancels SLCMs and #MoneyPitMissiles or we call BS

In their joint statement about the summit, the presidents said that “the United States and Russia have demonstrated that, even in periods of tension, they are able to make progress on our shared goals of ensuring predictability in the strategic sphere, reducing the risk of armed conflicts and the threat of nuclear war.”

They also pointed to the five-year extension of the New START Treaty in February, for which Biden expressed support shortly after taking office the previous month.

The recent extension of the New START Treaty exemplifies our commitment to nuclear arms control. Today, we reaffirm the principle that a nuclear war cannot be won and must never be fought.

Consistent with these goals, the United States and Russia will embark together on an integrated bilateral strategic stability dialogue in the near future that will be deliberate and robust. Through this dialogue, we seek to lay the groundwork for future arms control and risk reduction measures.

Good to seen US-Russian joint statement that "we reaffirm the principle that a nuclear war cannot be won and must never be fought.” https://t.co/GJkyUQh5Pc

So now two sides must begin to shift their nuclear planning from *winning* nuclear war to *deterring* nuclear use. https://t.co/USzzlIOw2Y

Katrina vanden Heuvel, editorial director and publisher of The Nation, wrote Tuesday in her weekly Washington Post column that the summit would be “an opportunity to reverse a dangerous and in many ways unprecedented deterioration in relations between the two countries—and begin to set a new course.”

“It’s hard to overstate the dire global implications if the relationship between the United States and Russia continues to worsen,” she continued. “Former Defense Secretary William Perry has said that in recent years, the chance of a major nuclear disaster has become even higher than during the Cold War—and cold wars fuel the military-industrial-congressional complex, empower war parties and hard-liners, and can virtually obliterate the space for dissenting views.”

According to the New York Times, Biden told reporters on Wednesday that “the tone of the entire meeting was good, positive,” a sentiment that was echoed by his Russian counterpart.

“There has been no hostility,” Putin reportedly said. “On the contrary, our meeting took place in a constructive spirit.”

The five “exotic” new nuclear weapons Putin unveiled in 2018 are designed to defeat any US missile defense. If Biden wants to curb this new arms race, he’ll have to limit US programs, too. Doing so will greatly increase US national security. Our analysis: https://t.co/BA0q8RLJNz

However, despite the apparent progress at the meeting, Arms Control Association (ACA) executive director Daryl Kimball noted earlier this week in a piece for Just Security that “both countries are spending tens of billions of dollars a year modernizing and upgrading their massive nuclear stockpiles,” and “at this point, neither side can credibly claim they are fulfilling their Nuclear Nonproliferation Treaty obligations.”

In early June, with a nod to Wednesday’s summit, more than 30 U.S. and Russian groups—including ACA—joined with international nuclear policy experts and former senior officials to collectively call on the presidents to “commit to a bilateral strategic dialogue that is regular, frequent, comprehensive, and result-oriented, leading to further reduction of the nuclear risk hanging over the world and to the rediscovery of the road to a world free of nuclear weapons.”

“To be effective, future strategic stability discussions need to amount to more than brief exchanges of grievances…Instead, the dialogue needs to be regular, frequent, comprehensive, and results-oriented,” says @DarylGKimball.https://t.co/KwphUUyKr6

On Tuesday, just ahead of Biden and Putin’s meeting at an 18th century building in a Swiss park, Fihn wrote for Fortune that “the U.S. and Russia must act in accordance with the ever-growing risk of nuclear annihilation and in recognition of the humanitarian consequences of nuclear use to significantly reduce their nuclear arsenals on the road to a world free of nuclear weapons.”

“They can accomplish this by agreeing to sign the Treaty on the Prohibition of Nuclear Weapons,” she continued. “As Putin and Biden meet in beautiful Geneva, they should remember the destruction and horror in Hiroshima and Nagasaki over 75 years ago, and commit to working to ban and eliminate nuclear weapons before such a tragedy happens again.”