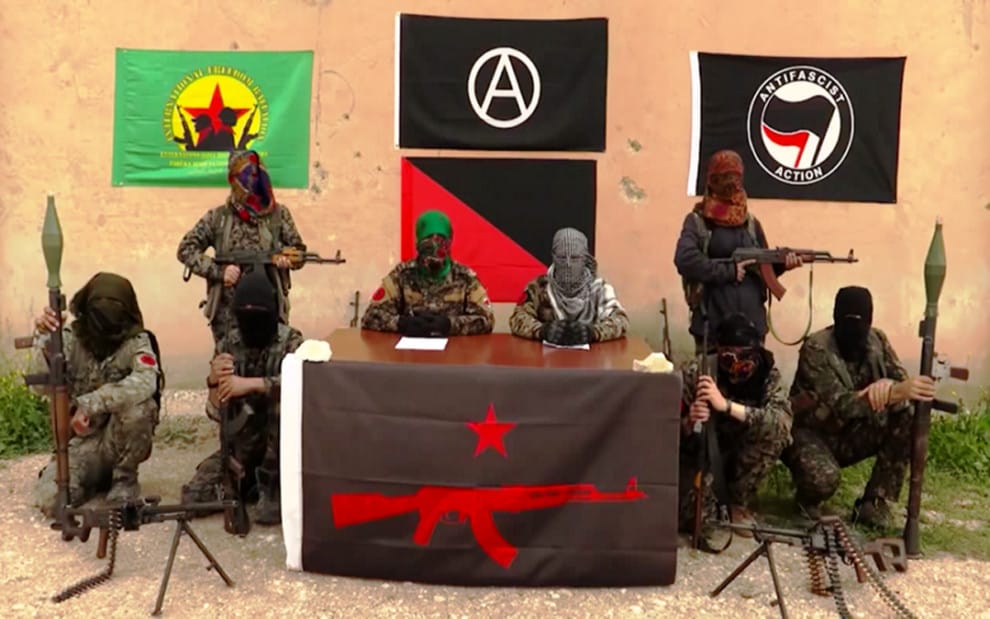 German Antifa members are encouraged to go and fight in Syria. They are trained and sponsored by the US. It and the EU call them the Syrian Democratic Forces (SDF). The SDF is an alliance of Kurds, some Arabs, as well as some smaller groups of Armenian, Turkmen, and Chechen forces. The SDF is militarily led by the People’s Protection Units (YPG), a mostly Kurdish militia, and also the PKK.

It‘s all connected. The so-called Syrian civil war, which was actually a conflict, a Color Revolution conducted by the “deep state“ of the US and Europe, is now expanding to the US and Europe themselves. We saw it coming, the ones who are awake and not following the Mainstream Media (MSM). The US, NATO, and the EU sponsored these groups such as the SDF, the FSA, and even terrorist groups like Hayat-Tahrir-as-Sham, Al-Qaeda, and Al-Nusra, resulting in ISIS (Daesh). The Western media and politicians were preoccupied with ISIS members coming back, now they will face a whole new different problem: Antifa, which has called for a European and US Spring. Revolution is unfolding, right before our eyes.

It’s actually no secret that not only ISIS (Daesh) terrorists but also Antifa members from Europe and the USA have moved to Syria since 2013 to receive military training. The Antifa members did so under the guise of fighting ISIS on the part of the Kurdish militia YPG. They fought under the umbrella organization “International Revolutionary People’s Guerrilla Forces“.

But for Antifa, not only ISIS and right-wing extremists, but also “capitalism” and the German, Dutch, French, and British authorities are an enemy. Actually, all the existing governments in Europe are, and of course, the Republicans in the US. The only question is: How should Europe deal with left-wing extremists who have militantly trained abroad and thus pose an immediate threat to internal security? I personally think that it’s too late. As I wrote before, Europe is a sinking ship, the society as a whole. All the illegal wars, the killings that they performed in the name of democracy, are now resulting in a repercussion. The so-called Democrats (US), the Greens, and the so-called socialist in Europe are encouraging Black Lives Matters, without being aware that they opened up Pandora’s Box once again, and by doing so, bring revolution and a European Spring to Europe and the US. Maybe it‘s all a tactic to cover up the new Smart/Tech Revolution (or industrial Revolution 4.0), which is going on and was implemented during the COVID-19 and now further during the Black Lives Matter revolution. They warned us, all the EU countries: “things will never be the same again“. It will not, as from 2015 till 2030 (Agenda 2030), it will never be the same again. Wars are raging, a pandemic, Color Revolution in the US and Europe, the anti-Russian hatred, and the ongoing war threats against China are all happening at the same time.

Back to Syria and the Antifa. Sources point out that Antifa returnees from Syria pose a threat to Western societies. “What does Antifa want with a few experienced combat veterans? Why do they need this to complement their movement?” The question of what exactly they are going to do needs to be discussed. Many have returned to their home countries. Antifa fighters go to Syria, receive training with machine guns, rocket launchers, bombs, and other weapons, and then return to their home countries. A certain structure can be seen. This problem should be viewed in the European and US context. Security agencies in various countries are now taking action against ISIS cells and right-wing extremist groups. But here are some important questions to be asked: Are Antifa returnees from Syria, who have a clearly hostile attitude towards state institutions, really harmless?

The US and NATO waged a diabolical war on Syria, destroying half of the population by either killing them or trying to starve them with inhumane sanctions as we can now see. The anti-Russian Western Media outlets are trying again to, ale us believe the Syrians are divided and that Russia wants to remove President Assad. For instance, one Western-sponsored so-called Russian media outlets write: “A survey produced by an obscure pro-Kremlin website recently sparked a global debate about the Kremlin’s potentially abandoning Syrian President Bashar Assad, a long-time Russian ally in the Middle East. While Moscow is indeed increasingly unhappy with Assad, there is little indication that Vladimir Putin has changed his game in the region“. The survey was conducted by Ksenia Svetlova.

“Ksenia Svetlova is a Senior Research Fellow at the Institute for Policy and Strategy at the Interdisciplinary Center Herzliya, Director of the Israel-Middle East Program at the Meitavim Institute, and former MP. The Institute of Modern Russia (IMR) is a public policy think-tank that strives to establish an intellectual framework for building a democratic Russia, Founded in 2010, IMR is located in New York City, USA“.

The Western press is quick to say that the protests remind them of 2011, but actually the demonstrations are against the US and EU, who imposed heavy sanctions against Syria which affect most of the population. Therefore, President Assad’s decided to replace Prime Minister Imad Khamis and told the richest businessman Rami Makhlouf to spend more money inside Syria. Even if it‘s family or not, this is normal for every democratic government to do. Put the best man in the best position when needed and build up the country.

It seems that the Western World, meaning the elite and deep state, has gambled too much and is now paying off their debts. Also, the opportunity to implement Agenda 2030 might be the real reason behind the so-called pandemic and Color Revolution we are now experiencing, so there might be some rough times ahead! President Assad once said: “The war will come to Europe, you can‘t fight terrorists and sponsor them as well.” As it turns out, this threat is coming to Europe from both the far left and Daesh.