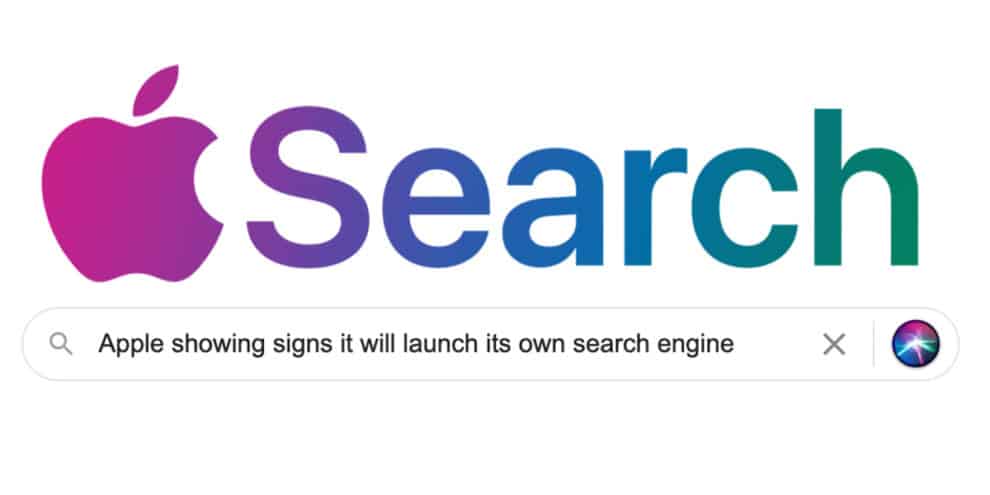 UPDATE Oct 30, 2020: Apple has stepped up the effort to develop its own search engine to replace Google on its devices. Alphabet-owned Google is facing immense scrutiny from the US antitrust regulators. Currently, Google pays Apple somewhere between $10 billion and $12 billion a year to be the default search engine on Apple’s Safari browser and iDevices. The deal is set to expire soon, and the antitrust regulators could prevent them from renewing it.

Sources familiar with the matter told the Financial Times that Apple’s search engine could be in the advanced stages of development. If the Google deal is not renewed, Apple would want to have its own search engine on Safari besides Microsoft Bing, Yahoo, and DuckDuckGo.

The Cupertino company has an Applebot web crawler, which has been crawling the Internet since at least 2014 to index and build the database of web searches. But the Applebot’s activity has increased significantly this year.

In iOS 14, you’ll see a ‘Today View’ with a search window when you swipe right on the iPhone screen. If you enter a search query in this window, it shows a list of Apple-generated search results rather than Google search results. Apple is “learning” from its one billion users worldwide the most common search queries, notes the Financial Times.

How will Apple monetize it?

It’s not yet clear how Apple would roll out the search engine. Would it be an enhanced version of Spotlight on iDevices? Will it be a full-blown search engine with its own website and apps like Google? Only time will tell.

It will also be interesting to see how Apple would monetize it. Google pays up to $12 billion to be the default search engine in Apple’s ecosystem. It was almost 100% profit. So it’s going to leave a huge hole in Apple’s pocket and the company would want to fill it.

Apple Inc, founded in 1976, is a Cupertino, California-based multinational tech company. For many years now, we have heard that Google has been paying the company some certain amount of money to remain the default search engine on the Safari browser. According to a recent report by the UK government’s Competition and Markets Authority (CMA), Google pays Apple roughly $1.5 billion for the default position in 2019, in the UK alone. With the deal, it means that Apple users will be able to make use of the Google search engine when using the Safari browser on their devices. However, it looks like the deal between the two giant tech companies will soon be coming to an end.

Here’s Why The Deal Might Soon Come To An End

According to a recent report by Reuters, the UK government’s CMA stated that the default search engine deal between Google and Apple creates a “significant barrier to entry and expansion” for Google competitors. Some of the rivals affected by the deal include Yahoo, Bing, and DuckDuckGo.

Here’s a brief of what the updated report by the regulatory body stated regarding the deal below:

“Given the impact of pre-installations and defaults on mobile devices and Apple’s significant market share, it is our view that Apple’s existing arrangements with Google create a significant barrier to entry and expansion for rivals affecting competition between search engines on mobiles.”

Looking at that, it’s most likely that the regulatory body will go after Google for its default search engine deal with Apple. Recall that over the last decade, the EU has fined Google billions of dollars several times. So, if that happens, most regulators in Europe will likely go after Google for its anti-competitive move. Apart from that, it’ll also have an effect on Apple. That’s because the regulators will force the company to remove Google as the default search engine, ending the deal. Also, it’ll force the company to offer its users the option to choose their preferred search engine upon setup.

Is It Possible For Apple To Launch Its Own Search Engine?

As mentioned earlier, it’s likely that the default search engine deal between Google and Apple would soon be off. Even if that happens, it’ll have little or no effect on Apple, as it’s a big company on its own. Recently, it set a new record, becoming the world’s most valuable company, with a market cap of over $2 trillion.

So, to the burning question above, the answer is Yes, there’s a possibility of that happening sooner or later. That’s because there are already several signs pointing towards that direction. Some of them include pressures from regulators and the maturation of the company’s Siri and Cloud, according to Coywolf.

Furthermore, according to recent job listings by Apple, it shows that the company is already investing in the search. Also, Coywolf mentioned that Apple is bypassing other search engines, including Google and Bing, and returning search results within Spotlight Search. On the iOS 14 betas, search results in the spotlight come, listed as “Siri Suggested Websites”.

In addition to that, in June, Apple also made some significant changes to its Applebot web crawler page. The changes, as noted by Henshaw of Coywolf include how to verify traffic from Applebot. It also added some expanded details on the differences in the crawler for mobile and desktop search. Interestingly, it also added a section, which states that the Applebot don’t just crawl HTML, but also works in a similar manner as that of Google. So, all of these and a few others are the signs, proofing that Apple might really launch its search engine.