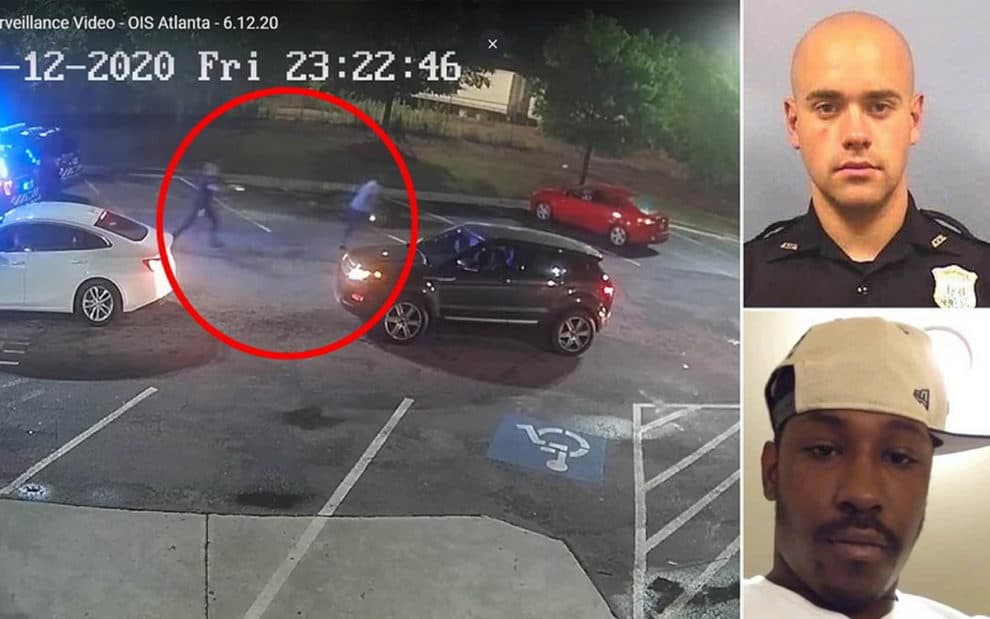 Last weekend’s ultimately lethal encounter in Atlanta between Rayshard Brooks and police officer Garrett Rolfe is being misportrayed by the media to fit their weaponized narrative of “racist white cops killing unarmed blacks for no reason”, but the “politically incorrect” truth is that Rayshard was wrong, Rolfe was right, and the incident wasn’t “racist” at all.

Everyone in America has an opinion about what happened to Rayshard Brooks last weekend in Atlanta after he was killed by police officer Garrett Rolfe in a crowded Wendy’s parking lot Friday night. Unlike George Floyd whose death during his arrest three weeks ago in Minneapolis was arguably the result of a despicable abuse of authority by police officer Derek Chauvin, Rayshard’s death was justified in the interest of protecting the pursuing police officers and the public despite still being tragic. Although it’s being misportrayed by the media to fit their weaponized narrative of “racist white cops killing unarmed blacks for no reason”, the “politically incorrect” truth as proven by bodycam and security footage from the fast-food restaurant is that Rayshard was wrong, Garrett Rolfe was right, and the incident wasn’t racist at all despite a medical examiner declaring the suspect’s death a “homicide” for purely technical reasons because he died after being shot twice in the back. Here’s why.

A Wendy’s employee called 911 after spotting Rayshard passed out in his vehicle in the drive-thru line. That’s a normal reaction for anyone to do considering that he looked like he might have been suffering from a medical issue, to say nothing of the fact that he was obstructing business. Officer Devin Brosnan was the first to respond to the scene and said that he struggled to wake Rayshard up, who then promptly passed out at least once while talking to him. Brosnan said that he smelled a strong stench of alcohol coming from Rayshard’s vehicle and suspected that he was drunk. Rayshard eventually woke up once again and was directed by Brosnan to pull into a nearby parking space while the office waited for backup, which came in the form of Garrett Rolfe, who was impressively polite and patient while conducting several field sobriety tests on Rayshard. Rayshard ultimately acknowledged driving under the influence and blew a 0.108 on the breathalyzer, which is why he was arrested.

It was then that what should have been an ordinary DUI arrest turned into a tragedy. Rayshard Brooks violently resisted arrest, even punching one of the officers in the face while scuffling with them. He then grabbed one of their tasers and started fleeing, but his fatal mistake was to turn around and express a clear desire to shoot the stolen taser at Rolfe (it’s unclear at the time of writing whether he actually shot the taser). Recognizing a threat to both himself and the rest of the public (remembering that the parking lot was crowded), Garrett Rolfe’s training immediately kicked in and he fired two shots into Rayshard’s back, which later ended up killing him. Rayshard’s supporters claim that he was “murdered” by Atlanta police officer for purely “racist” reasons, but an objective review of the intense situational context in which Garrett Rolfe discharged his firearm convincingly proves that this wasn’t the case at all.

Rayshard violently resisted arrest, assaulted two Atlanta police officers, stole one of their tasers, fled, and expressed a clear desire to shoot the stolen taser at one of the pursuing officers, all during the middle of the night in a crowded fast-food parking lot on the weekend. If he wasn’t stopped, he could have either tasered Rolfe before trying to steal his firearm (to either use against him, Brosnan, and/or an innocent person), caused a traffic accident by running through the street, and/or took an innocent person hostage as suspects fleeing in desperation have a tendency to do. Rolfe, therefore, had no choice but to defend himself and the public by discharging his service weapon. Failure to do so would have put more people in danger, not only because of the aforesaid scenarios but since Rayshard would then have been a fugitive with several felony warrants out for his arrest, thus drastically increasing the chances that he’d live a life on the lam and wouldn’t surrender peacefully.

What transpired Friday night was a triple tragedy — Rayshard Brooks lost his life because of his needlessly dangerous actions that put the public at risk, Rolfe’s career is ruined just because he did his duty protecting the public, and the Hybrid War of Terror on America continues to intensify as a result of this incident. Rayshard shouldn’t have resisted arrest (let alone assaulted two Atlanta police officers, stole one of their tasers, then expressed a clear desire to use it on the pursuing cop), Rolfe could have discharged his firearm during the scuffle or even while chasing after Rayshard prior to having the taser pointed at him if he really intended to “murder” him (to say nothing of firing more than just two bullets), and the media didn’t have to misportray this incident to fit their weaponized narrative of “racist white cops killing unarmed blacks for no reason”. It’s this third tragedy, however, that deserves some further elaboration.

Left-Wing Racism Is A Threat To Every American

The media, supported by the “deep state” from above and their Antifa “useful idiots” from below, want to manipulate African-Americans into carrying out a nationwide crime wave and even sprees of urban terrorism in reaction to highly publicized footage of police violence (whether the said violence was justified in Rolfe’s case or unjustified in Chauvin’s). This is intended to provoke a lethal response from the security services which could in turn incite a self-sustaining cycle of unrest that ultimately leads to a “race war” that destabilizes the US government. The end goal isn’t just to tilt the electoral odds against Trump in November, but to replace the country’s current economic system with a more leftist one. In other words, the social fascist means of weaponizing the issue of race is intended to advance leftist economic ends, ergo the term left-wing racism (or leftist-racism for short).

To be clear, one can support leftist economic models without utilizing or even associating with social fascism, but the American Left and their many supporters abroad are in the process of combining the two seemingly contradictory ideologies into a new Hybrid War model. The author explained this in two of his recent analyses about how “Antifa Wants To Lead African-Americans To Their Slaughter To Spark A Race War” and “The Syncretism Of Economic Leftism & Social Fascism Is The World’s Newest Danger”. Leftist-racism is therefore fast becoming a threat to every American because of the catastrophic consequences that it could cause for the country with comparatively minimal effort involved on the orchestrators’ part. The weaponization of radical identity politics for “revolutionary” leftist ends is literally tearing America apart at the moment, and the carnage might have only just begun unless the security services are successful in stopping this trend before it’s too late.

It’s sad that Rayshard Brooks was so drunk that he seriously thought that it was worth committing several violent felonies in order to escape arrest for a misdemeanor DUI, but one can’t help wondering whether he felt emboldened by the last three weeks of nationwide unrest into thinking that the cops will treat all African-American suspects with kid gloves regardless of the crimes that they commit. He sealed his fate the moment that he pointed the stolen taser at the pursuing officer since every American (especially African-Americans in the aftermath of highly publicized police shootings over the past decade) knows that expressing a desire to fire any weapon (whether lethal or non-lethal) at a cop will always end badly. Instead of reminding everyone how dangerous it is to do such a thing, the media is defending Rayshard’s recklessness in the hopes that other African-Americans will follow his lead, get killed, and further intensify the ongoing Hybrid War on America.