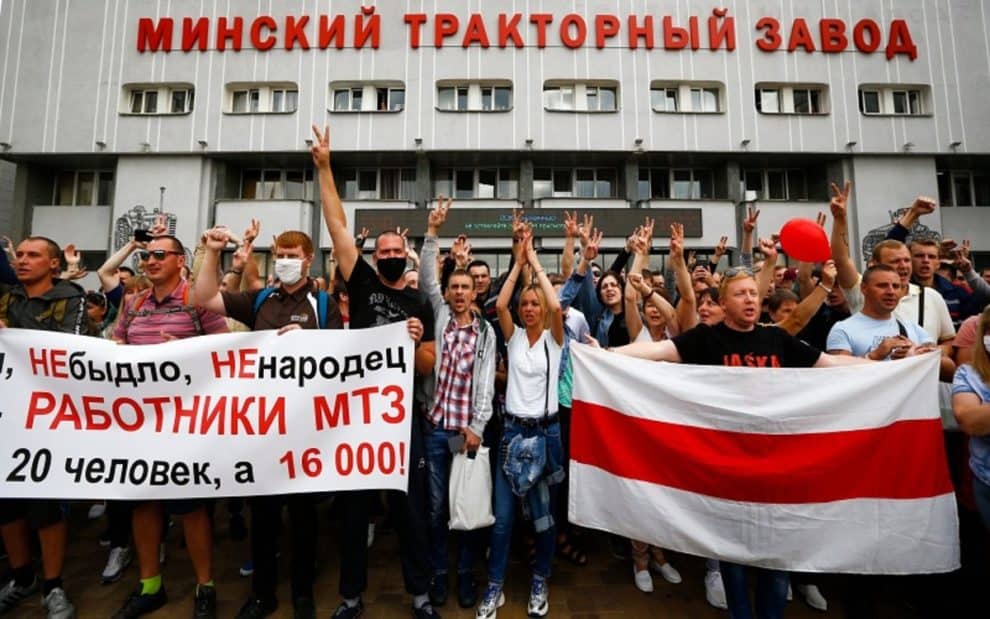 Belarus’ disproportionate budgetary dependence on five big businesses makes it extremely vulnerable to economic destabilization if the tiny percentage of the country’s population employed in those companies join in the nationwide labor strike movement to remove Lukashenko.

“The Economic Factor In Belarus”

The Hybrid War on Belarus is increasingly focusing more on the economic dimension for catalyzing regime change than the kinetic one commonly associated with EuroMaidan. The nationwide labor strike movement is gaining steam, which risks crashing the country’s economy if workers from its five biggest businesses that disproportionately contribute to its national budget join in and succeed in suddenly stopping production at these firms. According to Swedish neoliberal economist and Senior Fellow at the Atlantic Council (banned in Russia as of last summer for meddling in its internal affairs) Anders Aslund, these are “the potash company Belaruskali, the two largest oil refineries, the Minsk Tractor Works (MTZ), and the Minsk Automobile Plant (MAZ)”. He listed them off in his article about “The Economic Factor In Belarus” for the partially Soros-funded “Project Syndicate” international media organization, where he strongly lobbied for the country’s radical neoliberalization if Lukashenko is forced to leave office.

It shouldn’t be seen as a coincidence then that these same companies are targeted by the nationwide labor strike movement. Ore mining at Belaruskali, described by Russian publicly financed international media outlet TASS as “one of the world’s biggest producers and exporters of potash fertilizer”, was halted as of Wednesday (19 August). The outlet also reported on the same day that “two people were detained during an unauthorized mass rally” at the Minsk Tractor Works. Considering the outsized economic impact that a comparatively tiny percentage of the country’s population employed in these companies could cause if they participated en masse in this movement, these industries can rightly be regarded as Belarus’ “Achilles’ heel”. The government would have immense difficulty meeting its generous social obligations to the people which form the basis of its legitimacy should the situation worsen, which is why it’s possible that the authorities might deploy the security services to quell any unrest at those five companies so as to stave off that scenario.

Lukashenko himself warned on Tuesday that “this is not even a peak yet” when commenting on the ongoing Color Revolution against him, perhaps hinting that events might inevitably move in the previously mentioned direction. The government is very concerned about the consequences of such a scenario. Prime Minister Golovchenko, while claiming on that same day that “all enterprises of the real sector of the economy are working as usual” (though a lower official later said that there was already $500 million in damages), also said that Belarus would lose its hard-earned market position in those affected industries to its competitors if “any downtime” occurs. To prevent this from happening, workers are being educated about how the consequences would directly harm their living standards. The premier observed that “when convincing and simple words are used to explain what losses the enterprise is experiencing, how the standing of the specific worker, his or her salaries, bonuses will be affected, they come to realize that it is necessary to step down emotions a bit.”

The problem, however, is that an uncertain percentage of those “elite proletariat” (“elite” in the sense that their participation in the nationwide strike movement more so than any other industries’ workers could crash the economy) might be under the influence of fake news narratives such as the one promising them that “the new management will double the salaries of employees and make them shareholders” if the regime change campaign succeeds and their companies are privatized. This claim was made by someone in Minsk whose account was shared by the Federal City information outlet and republished at Yandex Zen (in Russian). Those high hopes are bound to be shattered because Western-backed regime changes have never resulted in such an outcome. Furthermore, opposition leader Svetlana Tikhanovskaya’s “Emergency Package of Reforms for Belarus” program (which was pulled offline but reported upon by Sputnik) makes its neoliberal intentions clear and even hints at cutting off Belarus’ trade with Russia, which would disastrously slash GDP by 25-50%.

The Struggle For Workers’ Hearts & Minds

Taking this strategic insight into account, it’s increasingly obvious that the Hybrid War on Belarus is moving from the streets to the factories as the regime change organizers and the authorities struggle to “win the hearts and minds” of the country’s “elite proletariat”. The former will say whatever is needed to convince them to strike and subsequently hand over their quasi-“socialist” economy to Western neoliberals while the latter must educate this tiny class of workers about the game that’s being played against them. The authorities might even decide to raise workers’ wages (perhaps paid for by an emergency loan from Russian in exchange for intensifying Belarus’ integration with it through the “Union State” framework) in order to disincentivize them from striking. No financial cost or relative weakening of its sovereignty is too high of a price to pay Russia either since neither the Belarusian state nor its workers (including the “elite proletariat”) would survive the planned post-Lukashenko neoliberalization that the pro-Western opposition is eagerly preparing for.

The greatest threat presently facing Lukashenko isn’t from street protests but from the possibility of large-scale labor strikes suddenly shutting down production at Belarus’ five main enterprises. The country simply wouldn’t be able to survive such a worst-case scenario for long, except perhaps if it sought emergency financial assistance from Russia in exchange for Belarus’ accession to the Russian Federation by referendum via the “Union State” framework considering the immense financial burden that would be placed upon Moscow if it subsidized Minsk’s survival under those pressing circumstances while Belarus remained a separate state. Lukashenko might not be able to swallow his pride and accept his potential future as just another Russian functionary instead of the leader of an independent country so there’s a chance that he might order the security services to intervene in stopping the strikes if the authorities can’t first succeed in convincing the workers to reconsider. Either way, events seem to be rapidly approaching a peak, and it’s all due to the strikes.