President Biden withdrew his nomination of gun control activist David Chipman to lead the ATF on Thursday after moderates objected, handing Biden a significant defeat on a platform promise to tighten federal gun policies. Here is the full statement of Biden over his ATF nominee David Chipman:

David Chipman spent 25 years in distinguished service to our country as an ATF agent. He’s a gun owner himself, and someone who has the backing of law enforcement groups. And, he’s spent most of last decade as a leading voice for commonsense gun violence prevention legislation that will save lives. He would have been an exemplary Director of the ATF and would have redoubled its efforts to crack down on illegal firearms traffickers and help keep our communities safe from gun violence.

Unfortunately, Republicans in Congress have made clear that they intend to use gun crime as a political talking point instead of taking serious steps to address it. That’s why they’ve moved in lockstep to block David Chipman’s confirmation, and it’s why they side with gun manufacturers over the overwhelming majority of the American people in opposing commonsense measures like universal background checks.

They even unanimously opposed the Rescue Plan, which has given cities and states $350 billion that they can use to put more cops on the beat so that they can really know the neighborhoods they patrol, and invest in proven community anti-violence programs – among other uses. While my administration has worked to strengthen law enforcement and crack down on gun crime, Republicans have opposed us at every turn.

We knew this wouldn’t be easy – there’s only been one Senate-confirmed ATF Director in the Bureau’s history – but I have spent my entire career working to combat the scourge of gun violence, and I remain deeply committed to that work. Since taking office, my Administration has taken numerous steps to combat gun violence, and we’ll continue to use every tool at our disposal to fight gun violence and keep Americans safe. I am grateful for Mr. Chipman’s service and for his work. 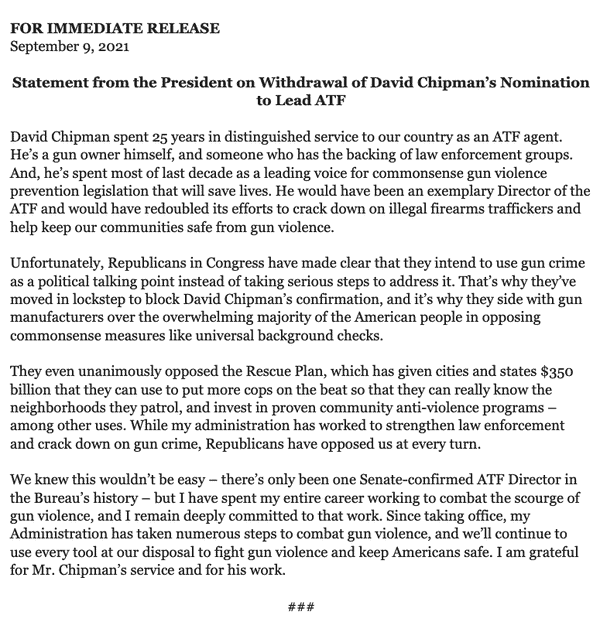