A movement demanding people to cancel Netflix subscription has gained momentum after Netflix released its film, “cuties” that featured borderline child pornography. “Cuties” released on September 9, ever since the promotional trailer was uploaded, the film caused an outrage around the globe.

Netflix subscriber count has been falling rapidly since the film was released. Just one day after the film was released a campaign with the hashtag demanding “Cancel Netflix Subscription” was in the top-trending spot on Twitter. On Saturday, Sept. 12, Netflix’s cancellation rate in the U.S. jumped to nearly eight times higher than the average daily levels recorded in August 2020. The data analytics provider told Variety that this huge drop in subscriber count marked a multiyear high. The #CancelNetflix hashtag is still continuing strong on social media. 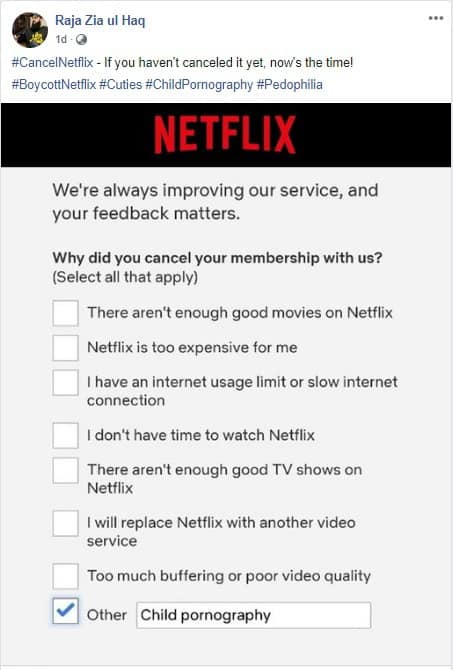 This is probably one of the first times when the entire world has united to raise their voice against Netflix collectively. A Change.org petition was launched even before the official release of the film. The petition demanded that Netflix should remove “Cuties” for featuring child pornography. As of Friday morning, the petition has more than 156,000 signatures.

Netflix defends its film after accusations of child pornography

“Cuties”, the movie aimed at normalizing child pornography follows Amy (played by Fathia Youssouf), an 11-year-old girl who joins a group of dancers named ‘The Cuties’ at her school. The film progresses by showing Amy becoming increasingly aware of her femininity which goes down badly with her Senegalese family and their conservative values. Many people have questioned the parents of Fathia Youssouf, who allowed their minor daughter to act out such a role.

Netflix has stooped low enough to defend the film portraying child pornography, official statement claims that the movie is a “social commentary” and that the audience is exaggerating the matter. The movie explicitly shows the sexualized imagery of minor girls multiple times throughout the duration of the film. The terrible movie has been written and directed by award-winning French filmmaker Maïmouna Doucouré.

The staff at Netflix has stated, ‘It’s an award-winning film and a powerful story about the pressure young girls face on social media and from society more generally growing up — and we’d encourage anyone who cares about these important issues to watch the movie.” It’s disappointing and frustrating knowing that the only way Netflix thought they could raise awareness of these topics by making a film laced with child pornography. In a world where children are already unsafe, Netflix is making exactly the kind of videos that will fascinate and motivate predators.