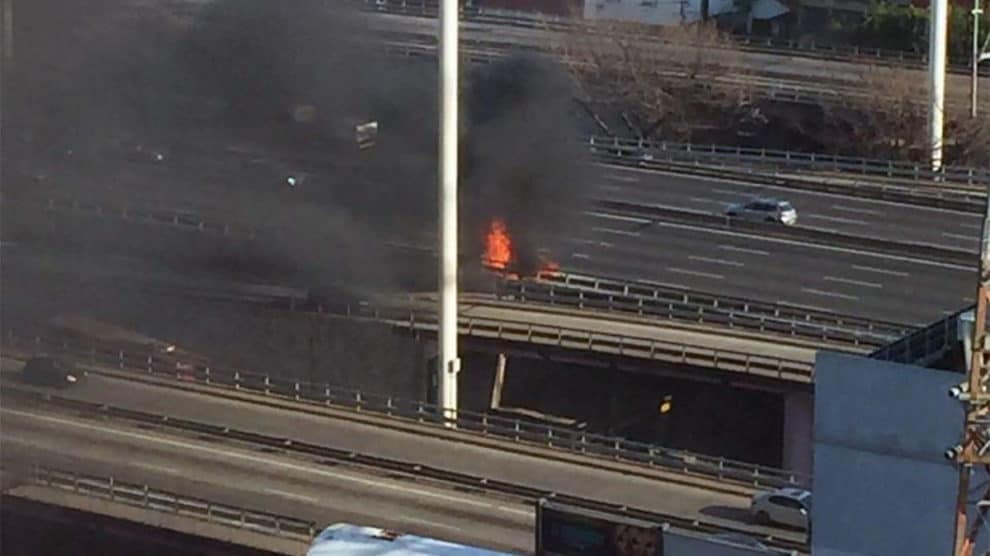 Today morning, a car exploded with fire on the General Paz Avenue in the Buenos Aires neighborhood of Saavedra. Within a few minutes, the fire engulfed the entire vehicle and the sound of the blast was heard in several areas of the city.

The incident occurred at approximately 9:30 am this morning and disturbed the traffic for several hours.  The vehicle that caught fire was identified as Fiat Fiorino utility vehicle, the cause for the massive fire is still unknown.

It is speculated that the fire originated in the middle of the car that spread to the gas tank in a matter of seconds and caused a huge blast. Several neighbors recorded the incident on their phones, they narrated that the fire was so massive that it seemed that the entire building would down crumbling down.

Insider Paper has got the video of the car explosion:

BREAKING NEWS: HUGE Explosion AND BLAST FOLLOWED BY FIRE — A car exploded today morning on General Paz Avenue , in the Buenos Aires neighborhood of Saavedra. The blast was so powerful that it was heard in several areas of the city.#GeneralPaz #BuenosAires pic.twitter.com/D2A58odwFc

Firefighters from the City of Buenos Aires immediately reached the scene and began working to subdue the flames. Thankfully, the occupants of the vehicle, two persons aged 57 and 28, were taken out of the car as soon as the fire started. The occupants were able to flee the burning car and remained safe.

Here’s another video of car explosion incident at the General Paz Avenue in Buenos Aires:

The firefighters and police personnel removed the car that had been reduced to ashes from the scene. The vehicle was transported to the collector.