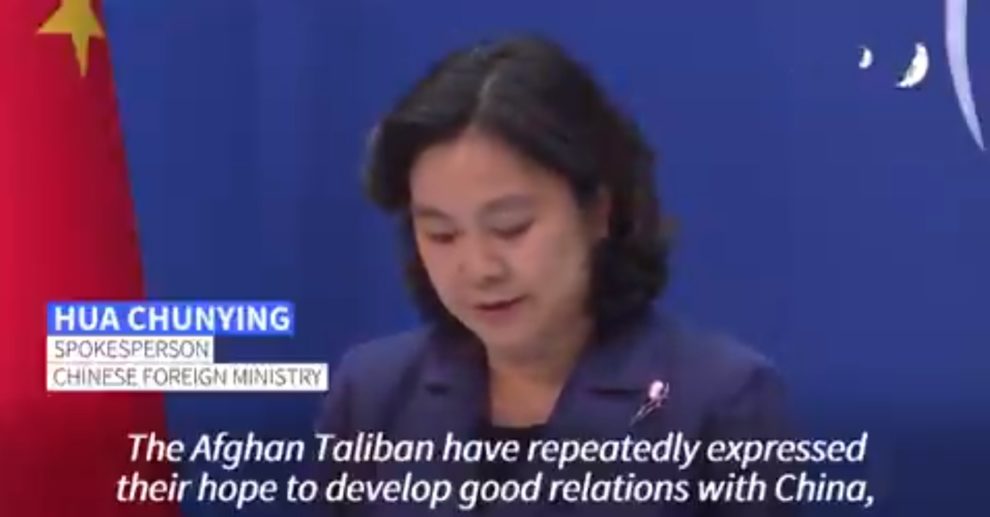 Several countries, led by the United Kingdom, have asked the international community not to recognise the Taliban in Afghanistan on a bilateral basis, but China has stopped short of declaring that it is a friendly force.

China has stated that the Taliban will establish a “open and inclusive” Islamic government in the war-torn country, ensuring a peaceful transfer of power.

The Chinese Embassy in Kabul is one of the few missions that is operating at full capacity, with no reason to close the office or evacuate the staff. Its ambassador is stationed there, but Chinese nationals who lived there have returned to China.

Hua Chunying, a spokesperson for China’s Foreign Ministry, went so far as to express hope that the Taliban would accept full responsibility for the safety of Afghans and foreign embassies and missions.

The Chinese government has decided to take the word of the Taliban on its face value, saying: “We noticed the statement from Afghan Taliban yesterday (Sunday) saying that the war is over and they will start consultation on establishment of an open and inclusive Islamic government and take the responsibility of the safety of Afghan citizens and foreign diplomatic corps.”

According to a Chinese government spokesperson, Beijing has maintained contact and communication with the Taliban while also playing a constructive role in promoting a political settlement.

China’s newfound affection for the Taliban stems from a meeting in China in July between Chinese Foreign Minister Wang Yi and the Taliban’s political commissioner, Mullah Abdul Ghani Baradar.

The Taliban’s assurance that it will not encourage anti-China elements to establish themselves in Afghanistan, such as the alleged Uyghur Islamic militants of the East Turkistan Islamic Movement.

China and the Taliban are perfect for each other. https://t.co/oMSlPvNVl5

According to some UN reports, hundreds of fighters from the Movement, which has been linked to al-Qaeda, are making their way to Afghanistan. The Movement has been removed from the United States’ list of terrorist organisations, but it may still be mentioned.

It should also be noted that China’s Xinjiang region, which is home to Uyghur Muslims, shares only a 76-kilometer border with Afghanistan. The People’s Liberation Army has heavily fortified the border.

Some Western analysts speculate that China wishes to wield influence in this region, and that with the Americans on their way out, it wishes to play a significant role in determining Afghanistan’s future.

China’s interests, on the other hand, are far more materialistic than political. At best, it may wish for Afghanistan to abandon its opposition to the Belt and Road Initiative Project.

The true motivations are economic in nature.

Afghanistan is said to have deposits of rare earth elements such as lanthanum, cerium, and neodymium, as well as minerals such as copper, iron, zinc, and gold worth trillions of dollars.

A Chinese mining consortium is already active in the Logar province. Three oil fields are being drilled for by a Chinese government-owned company.

An Indian media organisation has reported: “China seems to be approaching Afghanistan from a totally different direction; it is using every means to make the Afghans see the commercial sense in welcoming China into their country. Not war but economy is what the People’s Republic of China is betting on to bring Afghanistan into its web of influence; to make that happen, Beijing seems ready to partner with anyone who can deliver the goods, even if it be a regressive religio-political militia like the Taliban.”

Western defence experts, on the other hand, dismiss China’s commercial interest in Afghanistan.

CNN reported: “Such arguments have only intensified following the high-profile meeting between Taliban leaders and Chinese Foreign Minister Wang Yi last month… But for China, a neighbour of Afghanistan with substantial investment in the region, the security challenges posed by the abrupt return of the Taliban are far more pressing than any strategic interests down the road.”

It quoted Andrew Small, a fellow at the German Marshall Fund in Washington, as saying: “China does not tend to perceive Afghanistan through the prism of opportunities; it is almost entirely about managing threats.”

Small argued that China, which has long been wary of American military presence in Afghanistan, is now concerned that once the Americans leave, the country will become a hotbed for terrorists of all kinds, endangering China’s Xinjiang region.

“Although Beijing is pragmatic about the power realities in Afghanistan, it has always been uncomfortable with the Taliban’s ideological agenda… The Chinese government fears the inspirational effect of their success in Afghanistan for the militancy across the region, including the Pakistani Taliban,” Small told CNN.