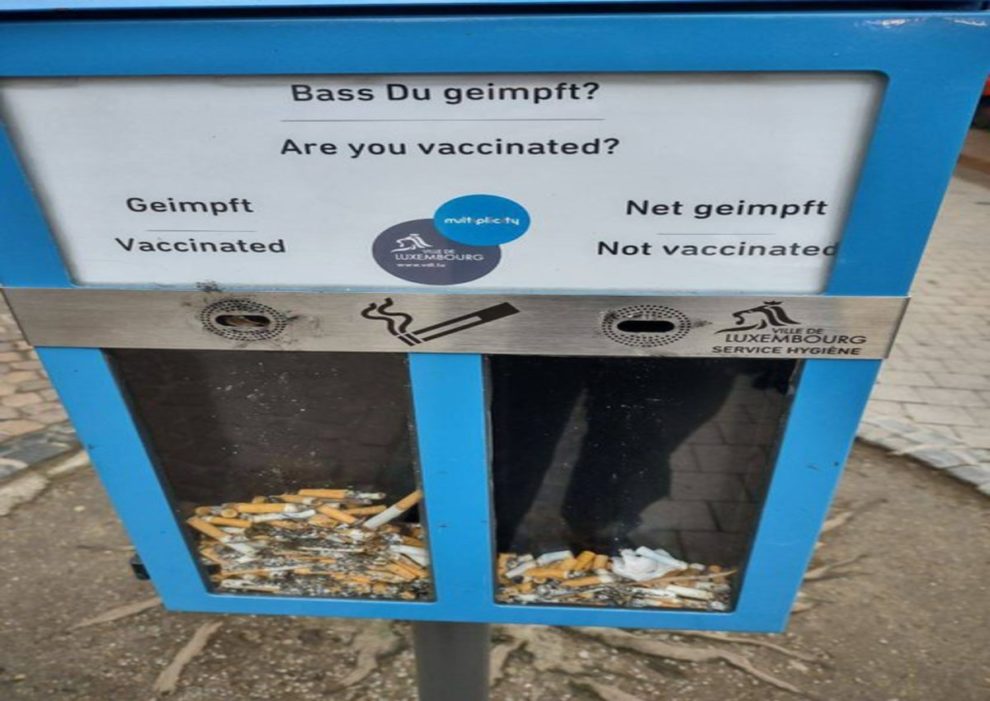 A new picture from out of Luxembourg could be a sign of segregation to come. A Twitter user posted a photo showing a cigarette bin with two compartments, one for the vaccinated and one for the unvaccinated.

Cigarette bin with compartments for vaccinated and unvaccinated

We’re starting to see photos of this cigarette bin with vaccinated and unvaccinated compartments on various websites, but this tweet appears to be the source of it:

An English translation of the last sentence in the tweet states: “We will have really seen it all.”

The meaning of the bin is unclear. Some people who have commented on the photo on various sites suggested that it could be a poll to see how many smokers are vaccinated and unvaccinated. Another suggested it could be a joke, but the original poster responded that it wasn’t.

Luxembourg’s Health Ministry published new numbers about COVID-19 infections in the country on Monday. The agency reported that the country had almost 1,000 new cases of the virus over the weekend, including five deaths due to COVID. About 10% of the COVID tests that were conducted between Friday and Sunday were positive for the virus.

The number of COVID infections is soaring in many European countries, and some of them have reimposed the restrictions that were widespread early in the pandemic. According to the Luxembourg Times, the addition of five more deaths between Friday and Sunday brings the total fatalities in the country since the beginning of the pandemic in March 2020 to 903.

The health ministry reported last week that Luxembourg was seeing an increase in hospital admissions due to COVID, although the number of admissions is still well below the 200-per-day peak in November.