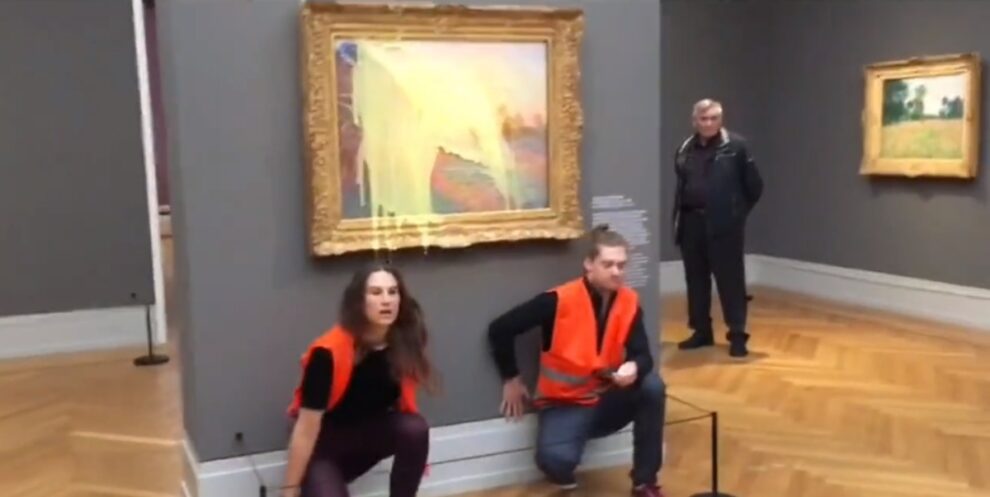 Eco-activists on Sunday splashed mashed potatoes on a Claude Monet painting in a German museum, days after Vincent van Gogh’s “Sunflowers” in London was hit by tomato soup.

Publishing a video of the action on Twitter, the environmental protest group Last Generation wrote: “If it takes a painting –- with #MashedPotatoes or #TomatoSoup thrown at it -– to make society remember that the fossil fuel course is killing us all: Then we’ll give you #MashedPotatoes on a painting!”

The work, “Les Meules” (Haystacks), hangs in the Museum Barberini in Potsdam and is part of billionaire Hasso Plattner’s collection. It is on permanent loan to the museum.

The painting fetched $111 million at an auction in 2019 — the highest sum paid for a Monet.

Dressed in black with orange vests, the two activists poured the mashed potatoes on the painting before squatting in front of it and sticking a hand each on the wall.

“Does it take mashed potatoes on a painting to get you to listen? This painting is not going to be worth anything if we have to fight over food,” said one of the two activists.

Both were taken into custody and are under investigation for damage to property and trespassing, police said.

The painting was protected by glass, the museum said, adding that experts have assessed that it has not suffered any damage.

The work will be back on show from Wednesday, the museum said.

In a similar stunt on October 14, two environmental protesters hit van Gogh’s world-renowned work with tomato soup at the National Gallery in London.

The gallery said the protesters caused “minor damage to the frame but the painting is unharmed”.

Biden says ‘life of the planet’ at stake in climate crisis