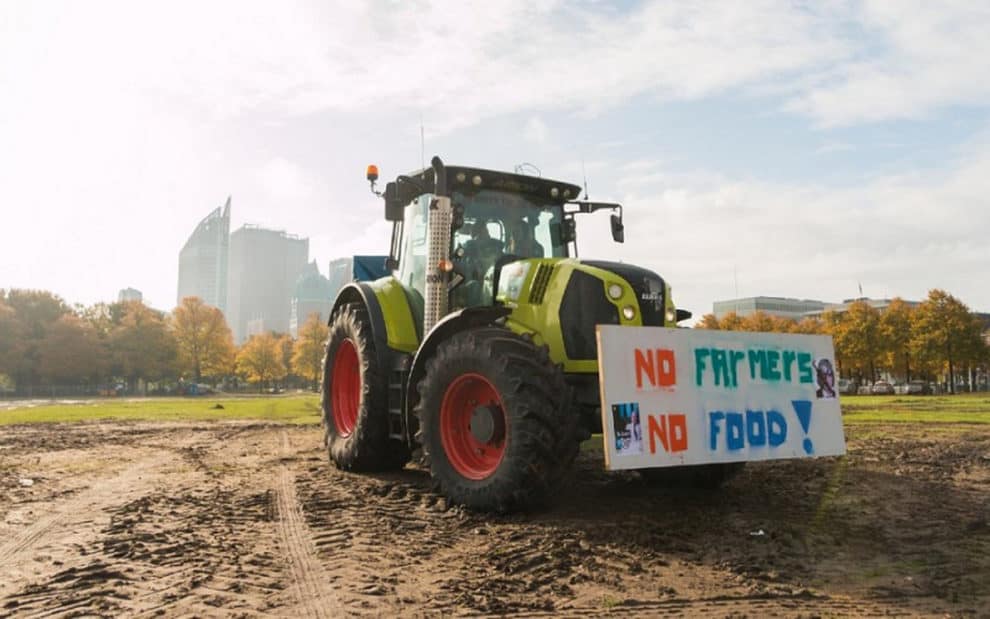 In the past few weeks since the COVID-19 scare, the Dutch media and government have been captivated by Black Lives Matter. Suddenly, all the Dutch are racists, and “talk shows” have become “shouting” programs. Farmers fear for their existence because of a new nitrogen law imposed upon them by the Dutch government and the European Union (EU), which is why they’ve started protesting.

The immediate cause of the protest for many farmers was the proposal by the Dutch ruling political party called D (Democrats) 66. Their aim is to cut the livestock of farmers in half. The party follows the advice and guidelines of the EU, and the new law says that nitrogen levels need to be reduced.

LTO – Netherlands, a union for livestock and agricultural farmers, has indicated that with the occupation of a pig farm in Boxtel, a city in a southern province of the Netherlands, “was the fuse of the great resistance“. The farmers have been in revolt against the Dutch government and the EU for several weeks already. After all, the Netherlands is no longer a sovereign state, but an “appendage” of the greater Brussels.

Also, the Dutch government prefers large “Monsanto” farms who use the weed killer Glyphosate. Another part of discontent is the newly built Vegetarian meat factory sponsored by the Bill and Melinda Gates Foundation called Beyond Meat, situated in Zoeterwoude, the Netherlands.

The Dutch Minister for Agriculture Carola Schouten has been the subject of controversy recently. Born as a farmer’s daughter, she claims to have a “big heart“ for farmers, especially for farmers with livestock. After a thorough investigation, it turns out that her family owns a vegetarian meat company called Schouten Food B.V., already established in 1990 and owned by some of her family members. This is in contradiction with her post as Minister of Agriculture and claiming to care about the livestock farmers. At the very least, it’s demoralizing the farmers who invested a huge amount of money and received lots of loans from banks to make their farms “animal-friendly“ and invested in the necessary IT for their milking equipment.

The farmers protest already started in October 2019, before the COVID-19 crisis. After the lifting of the lockdown in May, the protests started again, but this time they intensified. The Netherlands is not really a protest country, at least compared to other European countries. But if we look at the recent farmers’ protests, which have been quite intense at times (they forced open the door of the provincial house in Groningen, for example), it has become one. The blockade of highways and supermarket food distribution centers has been among the protest tactics. To understand them better, one must know that the Netherlands has been an agricultural farmers’ country for many centuries. Dutch cows, “black and white Holstein dairy cows“, are the most famous and are exported throughout the world. You can compare them with the expensive and famous Arabian horses. Also, the Netherlands is a dairy country where milk and desserts are very popular.

After the allowance from the Dutch government and mayors to allow demonstrations from Black Lives Matter and the Extinction Rebellion during the COVID-19 lockdown but the prohibition of the farmers’ protests, they got really angry as they are the backbone of Dutch society. They provide their food, not only meat, but milk, butter, and bread. They are not listened to by the Dutch government and face bankruptcy if the new laws are to be implemented.

Last week, a group called Farmers Defence Force Netherlands (FDF) gave the Minister of Agriculture an ultimatum, if you would like to call it that. They asked the minister for a dialogue between them and the Ministry of Agriculture, but he rejected it on the spot. They (FDF) promised not to protest for one week if there would be a dialogue. Well, after the rejection, they will protest again but in a more severe way. The province of Friesland, the most northern province of the Netherlands, is in an uproar and so is Groningen, another province up north. In Groningen, a lot of small earthquakes have been taking place over the last 10 years due to gas extraction by the Dutch company NAM which destroyed a lot of houses. Until now, the compensation paid by the government and NAM is not worth mentioning.

The Farmers Defense Force (FDF) has announced a national action day for Wednesday, July 22. It is not clear what will happen that day and therefore whether the activists will block roads or companies. The Farmers Defense Force calls on the rest of the Netherlands to work from home that day. FDF says: “Go to work from home for a day, or just stay at home for a day if you already have a holiday“. This is unprecedented in the Netherlands, a country where demonstrating is not high on the agenda. We can call it the “political“ result from the COVID-19 world order, where the pandemic is used for political purposes!