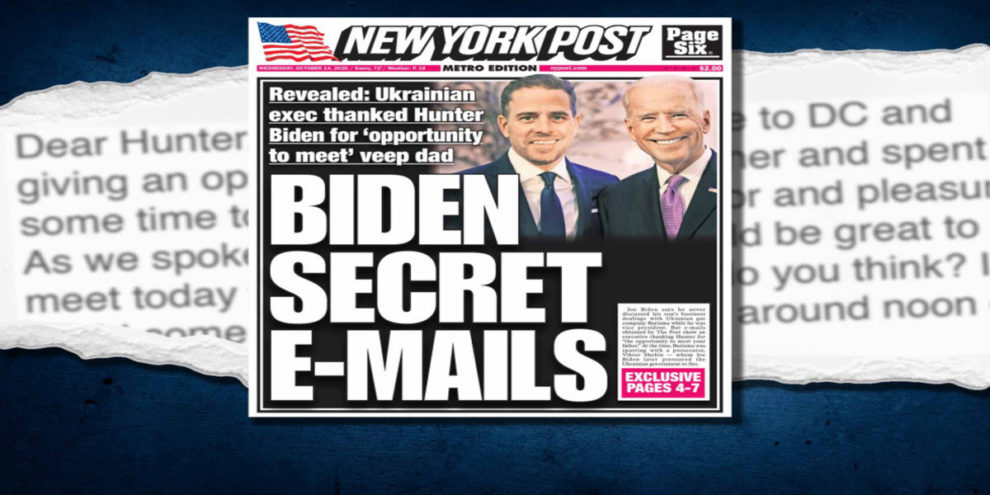 Facebook has once again found itself in the middle of a conspiracy. Apparently, Facebook says that it is “reducing the distribution” of the New York Post’s report/story in which Hunter Biden introduced an executive for the Ukrainian company. This Ukrainian company executive was paying for his father when Joe Biden was the vice president of the United States.

By preemptively reducing the distribution of this post, Facebook is showing its inherent bias and prejudice regarding the 2020 presidential election. It is reported that the New York Post’s story contains hard documents and named sources.

Kelly Loeffler, a US Senate candidate tweeted, “Facebook allowed the Russian Collusion hoax to spread like wild fire on their platform… WITH NO EVIDENCE. There is PROOF that Joe Biden and Hunter Biden were involved in a corrupt scheme in Ukraine. Facebook needs to be held accountable for this blatant election interference!”

Another media person tweeted, “Democrat Operative using his Corporate position at Facebook to influence the United States Election. @andymstone is working with his coworkers in the Democrat party to… Shadow ban news that Joe Biden lied and knew about his son Hunter’s corrupt foreign business deals.”

Andy Stone, the Policy Communications Director at Facebook tweeted, “While I will intentionally not link to the New York Post, I want be clear that this story is eligible to be fact checked by Facebook’s third-party fact checking partners. In the meantime, we are reducing its distribution on our platform.“

Many people have expressed disappointment at Facebook’s biased stance when it comes to news. One user tweeted, “This is why I used Facebook to look at animal videos, rock painting videos, and videos of old retired musicians. Facebook’s censorship of the news, especially during a political campaign, is abominable. Facebook’s publisher status needs to be addressed in the next Congress.”

It is reported that “fact-checkers” employed by Facebook “fact-checkers” are extremely aligned to the left-wing ideology. It is alleged that their agencies like “lead stories” are predominantly extracted from former CNN staff. This pool of CNN staff also includes people who only donate to the Democrats.

One user tweeted, “Facebook liberals panic as Biden revealed to have met with Ukrainian’s after lying about not knowing anything about Hunter‘s business dealings. Facebook should be broken up into tiny pieces after this election rigging.” It is likely that Facebook will be penalized for demonstrating their inherent bias and manipulation regarding election campaigns.  These actions are liable to be charged for interfering in the elections by manipulation of information. Facebook has also attracted considerable criticism in the past for similar actions.