Chinese State Councilor and Foreign Minister Wang Yi on Wednesday have a meeting with Taliban's political chief Mullah Abdul Ghani Baradar in north China's Tianjin Municipality. Baradar is leading a Taliban delegation to visit China. Baradar hailed China a "trustworthy friend" of the Afghan people and said he appreciates the "fair and positive role" that China plays in Afghanistan's peace and reconciliation process.

The meeting in Tianjin, China, comes as US-led foreign forces continue to withdraw from Afghanistan.

According to a readout of the meeting from the foreign ministry, Wang Yi told the nine visiting Taliban representatives, including the group's co-founder Mullah Abdul Ghani Baradar, that Beijing expected them to "play an important role in the process of peaceful reconciliation and reconstruction in Afghanistan."

According to the readout, he also expressed hope that the Taliban would crack down on the East Turkestan Islamic Movement, which he described as a “direct threat to China's national security” and is active in the Xinjiang region in China's far west. Beijing has expressed concern that neighbouring Afghanistan may be used as a staging ground for separatists.

The visit comes at a time when the Taliban has made significant gains across Afghanistan since May, when US-led foreign forces began the final stage of their withdrawal, which is expected to be completed by the end of August.

Combat with Afghan government forces has resulted in an increase in civilian casualties and displacements.

At the same time, Taliban leaders have increased their international diplomacy in recent months in order to gain global recognition for when they hope to retake power.

The meeting in Tianjin, China, on Wednesday, which Taliban spokesman Mohammed Naeem said was at the invitation of Chinese authorities, was widely interpreted as a gift from Beijing toward that legitimacy. 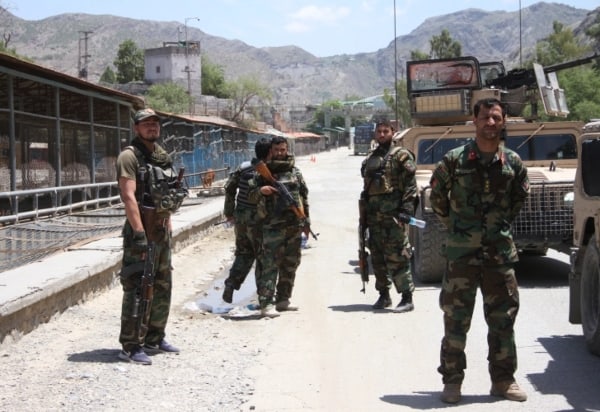 Naeem wrote on Twitter that “politics, economy and issues related to the security of both countries and the current situation of Afghanistan and the peace process were discussed in the meetings”.

“[The] delegation assured China that they will not allow anyone to use Afghan soil against China,” Naeem said. “China also reiterated its commitment of continuation of their assistance with Afghans and said they will not interfere in Afghanistan’s issues but will help to solve the problems and restoration of peace in the country.”

Beijing has viewed the US withdrawal from Afghanistan as a boon, and close ties with a future Kabul government could pave the way for the Belt and Road Initiative to be expanded into Afghanistan and through Central Asian republics.

On Wednesday, a spokesman for China's foreign ministry sought to emphasise the differences between Washington's and Beijing's policies.

“China has throughout adhered to non-interference in Afghanistan’s internal affairs … Afghanistan belongs to the Afghan people,” he said, adding it was a stark contrast to the “failure of US policy towards Afghanistan”.

For his part, US Secretary of State Antony Blinken, who is on an official visit to India, warned on Wednesday that if the Taliban takes control by force, Afghanistan will become a "pariah state."

“The Taliban says that it seeks international recognition, that it wants international support for Afghanistan. Presumably, it wants its leaders to be able to travel freely in the world, sanctions lifted, etc,” he told reporters.
“The taking over of the country by force and abusing the rights of its people is not the path to achieve those objectives.”

Separately, Afghanistan’s President Ashraf Ghani urged the international community “to review the narrative of the willingness of the Taliban and their supporters on embracing a political solution”.

“In terms of scale, scope and timing, we are facing an invasion that is unprecedented in the last 30 years,” he said in a speech on Wednesday.

“These are not the Taliban of the 20th century … but the manifestation of the nexus between transnational terrorist networks and transnational criminal organisations,” he said.

This topic was modified 6 months ago 2 times by The Dev
Topic Tags
Please Login or Register to reply to this topic.
All forum topics
Previous Topic
Next Topic
Topic Tags: