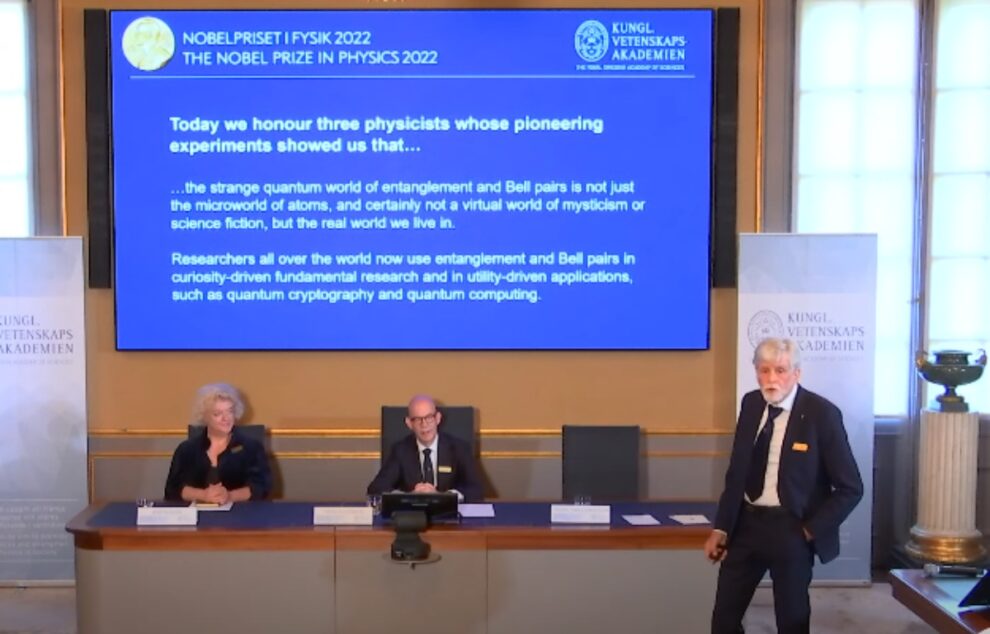 A trio of physicists on Tuesday won the Nobel Prize for discoveries in the field of quantum mechanics that have paved the way for quantum computers, networks and secure encrypted communication.

Alain Aspect of France, John Clauser of the United States and Austria’s Anton Zeilinger were honoured for “groundbreaking experiments using entangled quantum states, where two particles behave like a single unit even when they are separated”, the committee said.

“It has become increasingly clear that a new kind of quantum technology is emerging,” said Anders Irback, chair of the Nobel Committee for Physics.

Albert Einstein and two other physicists first brought up the idea of quantum entanglement in 1935, in a thought experiment that became known as the EPR paradox.

This occurs even if they are far apart, something Einstein dismissed as “spooky action at a distance”.

“We must give the credit to Einstein to have raised the equation,” Aspect said in his Nobel Foundation interview.

Aspect, a professor at the Paris-Saclay University, also noted the international makeup of the group as an important signal in the face of rising nationalism around the world, which he urged the scientific community to stand against.

“It’s important that scientists keep their international community at a time when… nationalism is taking over in many countries,” he said in a phone interview with the Nobel Foundation published on YouTube.

Aspect and Clauser, a research physicist based in California, were singled out for their developments on the work of John Stewart Bell, who in the 1960s “developed the mathematical inequality that is named after him”.

First, Clauser “built an apparatus that emitted two entangled photons at a time”, through a filter to test their polarisation.

“The result was a clear violation of a Bell inequality and agreed with the predictions of quantum mechanics,” the jury said.

Aspect then closed one loophole that meant the measurement setting did not affect the results after the entangled pair had left its source.

Zeilinger, a professor of physics at the University of Vienna, was highlighted for his work on “quantum teleportation, which makes it possible to move a quantum state from one particle to one at a distance”, the jury said.

“It is not like in the ‘Star Trek’ films or whatever, transporting something — certainly not the person — over some distance,” Zeilinger said.

“But the point is, using entanglement you can transfer all the information which is carried by an object over to some other place where the object is reconstituted.”

The physicists have been credited with paving the way towards what has been called the “second quantum revolution”.

“The first quantum revolution allowed us to have transistors, semi contactors, computers and lasers,” Mohamed Bourennane, a professor in quantum information at Stockholm University, told AFP.

“But the second revolution, which is based on superposition and entanglement, will allow us in the future to have new devices like quantum computers,” he added.

Clauser, Aspect and Zeilinger were also honoured together when they received the prestigious Wolf Prize in 2010.

The three, who will share the Nobel award sum of 10 million Swedish kronor ($901,500), will receive the prize from King Carl XVI Gustaf at a formal ceremony in Stockholm on December 10, the anniversary of the death in 1896 of scientist Alfred Nobel, who created the prizes in his last will and testament.

The scientists were congratulated by French president Emmanuel Macron, who noted Einstein’s scepticism.

“Einstein himself did not believe in quantum entanglement! Today, the promises of quantum computing are based on this phenomenon,” Macron tweeted

Last year, the academy honoured Syukuro Manabe, of Japan and the United States, and Klaus Hasselmann of Germany for their research on climate models.

Italian Giorgio Parisi also won for his work on the interplay of disorder and fluctuations in physical systems.

The physics prize will be followed by the Nobels for chemistry on Wednesday, the highly watched literature and peace prizes on Thursday and Friday respectively, and the economics prize on Monday.