Android 12 is the latest stable operating system from Google. Released in early October 2021, this OS came with a host of new features and improvements over its predecessor. Ever since Google launched Android 12, the company has continued to roll out updates to improve the operating system and fix bug-related issues. In February, Google released an Android 12 update for the Google Pixel devices. Interestingly, the update introduced a couple of bug fixes. Sadly, it also came with a bug. According to several reports, Google Pixel users reported that the call chip in the status bar disappeared after the update.

What is the exact cause of this new Google Pixel issue? Will there be a fix to address the problem? These are the questions you’ll find answers to in the rest of this article.

According to the latest reports across social media platforms, Google Pixel users are now experiencing a situation, in which the ongoing call chip in the status bar disappeared. Explaining the issue, some affected users reported the problem started for them after receiving the Android 12 February 2022 update.

For those who don’t know, the call chip on Google Pixel’s status bar surfaced in June with the Android 12 Beta 2 update. The primary function of the feature was to display the duration of the call. 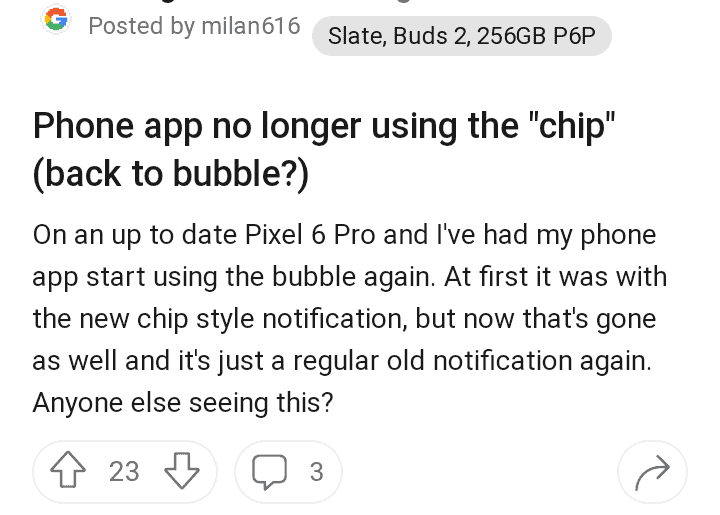 Will the feature come back to us?

Interestingly, the Google team is already aware of the issue, according to this post. The team also knows about the Android 12 users’ questions, regarding when the feature will return to them.

Unfortunately, it seems the Google team is the one behind the disappearance of the ongoing call chip feature in the status bar. We’re saying this because Google has recently marked the issue as ‘Won’t fix (Intended behaviour)’ on its issue tracker. So, if you’re one of those people hoping that Google will resolve the issue, the truth is the call chip feature might never come to us again, at least in the Android 12 operating system.

Google One VPN not working or connecting on Pixel devices

Google Pixel not showing new update for some users