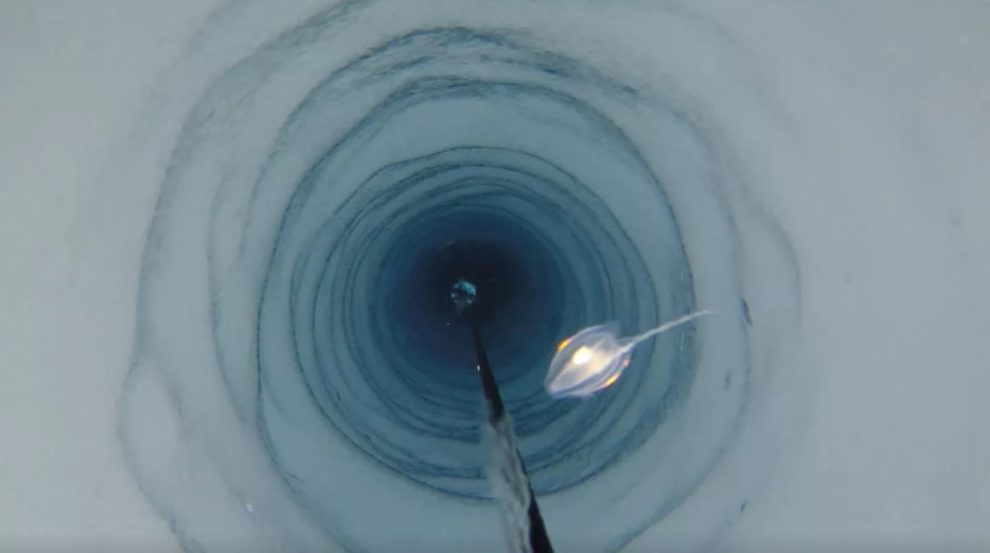 Scientists drilling through the Antarctic ice shelf to study its history found an interesting GoPro video of strange and mysterious sea creatures living under miles of thick ice and freezing waters.

The report about the mysterious and strange marine creatures in the Antarctic was first published by WIRED, the actual discovery was made when geologist James Smith from the British Antarctic Survey was trying to obtain seafloor sediment from the Filchner-Ronne Ice Shelf, which is at a distance of a five-hour flight from the nearest Antarctic station.

Smith had been living in a tent for about three months under freezing temperatures surviving on dehydrated food. He wanted to get seafloor sediment to study the history of the floating shelf, for which he had to drill through half-a-mile-thick ice.

In order to do that, they had to melt 20 tons of snow to get 20,000 liters of hot water and then pump it on a pipe that had been inserted down a borehole. All this effort took 20 hours and the team was finally successful to lower an instrument to acquire seafloor sediment along with a GoPro camera. They wanted to discover what was under the ice but the first attempt was not successful.

Several attempts were carried down the ice and each roundtrip took an hour.

Although they failed to get seafloor sediment, Smith and his team found another interesting thing: a huge boulder in the middle of the seafloor full of strange and mysterious sponges and stalked animals.

The research, published in the journal Frontiers in Marine Science on Monday, was conducted between 2015 and 2018 and is the first to capture immobile animals — three “suspension feeders”. The crew identified them as sponges and other invertebrates.

“This discovery is one of those fortunate accidents that pushes ideas in a different direction and shows us that Antarctic marine life is incredibly special,” said Huw Griffiths, lead author and biogeographer with the British Antarctic Survey.

The discovery came as something unexpected for scientists, who were searching through the shelf that sits against the Weddell Sea.

“It’s not the most exciting-looking rock—if you don’t know where it is,” said Griffiths.

Scientists believe that the strange sea creatures are living in ultimate darkness, yet they are surprised that those sea creatures are not able to benefit from “marine snow” being the decomposed parts of creatures living above the water level stranded in the deepest seafloors.

There is still a lot of discoveries to be made about mysterious creatures, but scientific theory suggests that the marine snow goes horizontally instead of vertically, that way the creatures can get food and survive.