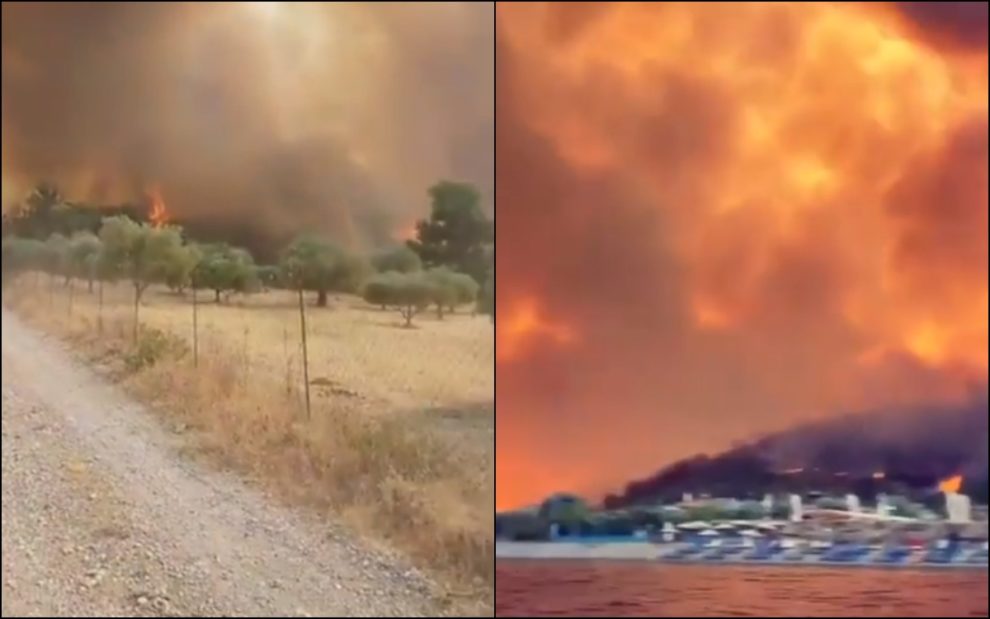 A state of emergency has been declared in Greece’s Varybobi area and the larger municipality of Acharnes in the northwestern region of Athens after at least 114 wildfires erupted in just 24 hours.

“We are fighting a titanic battle on multiple fire fronts,” Nikos Hardalias, Deputy Minister for Civil Protection and Crisis Management, said at a press conference on Wednesday evening, as wildfires raged across the country.

The largest of these fires occurred on the island of Evia, in ancient Olympia, though wildfires also raged through Messinia in the Peloponnese and Chalkidiki in northern Greece, according to the Xinhua news agency.

Hundreds of people were evacuated from more than ten villages on the island of Evia as a wildfire burned houses and forest land on four major fronts in the north of the island since Tuesday evening.

According to the Greek national news agency AMNA, coast guard vessels and private boats assisted in the transfer of 90 residents and tourists from the coastal town of Rovies, in Evia, who were sent to the beach for safety in the port of Edipsos.

At the same time, similar scenes were taking place in the municipality of ancient Olympia, the birthplace of the ancient Olympics in northwestern Peloponnese.

“Seven fires broke out in Ilia prefecture on Wednesday, four of which (are) in the broader area of the town and ancient site of Ancient Olympia,” Hardalias said.

Firefighters backed up by aircraft dropped water on the 2,800-year-old ruins, one of antiquity’s most revered sites, as alert 112 messages were issued to residents ordering them to evacuate eight villages.

Forest fires are common in Greece during the hot, dry summers, but nothing has come close to the magnitude of the last four days.

According to the National Observatory of Athens, fires that have erupted since the beginning of August have destroyed more than half of the land surface in Greece that is normally destroyed over the course of a fire season.

In particular, fires in Attica, Rhodes and Evia, as well as Eastern Mani, destroyed nearly 6,000 hectares in August.

In northern Greece yesterday a plane gulped ocean water to dump on a fire that had sparked in the hills pic.twitter.com/w6I7w4wRSg

Extreme temperatures in #Greece fueled wildfires on the mainland and on an island near #Athens on Wednesday, a day after a blaze tore through a forest near the capital. pic.twitter.com/SMof3T3wFH

Massive wildfire in Greece spreads and moves towards Athens pic.twitter.com/OWO25f98sx

The forest fires burned through more than 14,800 acres (6,000 hectares) of land in three days.#Greece