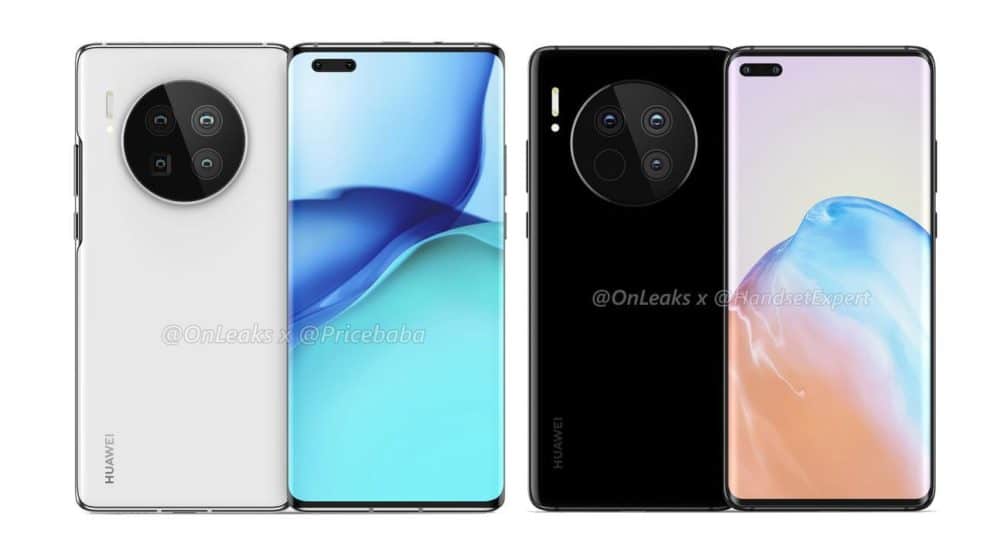 Last year’s Huawei Mate 30 came with lots of great features including the HiSilicon Kirin 990 processor. Now we are already in September, meaning we’re a step closer to the release date of the upcoming Huawei Mate 40. Huawei always keeps its latest technology and features for the Mate line. If you’re interested in knowing more about Huawei Mate 40, especially its release date and specs, here’s everything we know so far about it.

Huawei released the Mate 10 series in November 2017. The Mate 20 was released in October 2018. Last year’s flagship Mate 30 series launched on September 19, 2019. Looking at that, we can expect the release date of Huawei to be around Autumn.

Fresh rumors indicate that Huawei won’t be able to launch the Mate 40 series until early next year. Even if it manages to launch the device in October or November in China, an international launch is some time away. Reliable Twitter tipster Evan Blass said in a tweet that “if you’re waiting on the Huawei Mate 40 series, you won’t be able to get your hands on one until next year.”

Even last year’s Mate 30 launch took place in September 2019. But several international markets didn’t receive the device until January of 2020. The Mate 40 series could see an even slower international rollout, thanks to lower than expected demand.

UPDATE on the release date: According to the latest report, it’s been confirmed that the new Huawei Mate 40 series will be announced in a couple of days. The Chinese company officially confirmed that it’ll unveil the devices on October 22, 2020, at exactly 1 pm UK time.

As for when the devices will start selling, it’s worth knowing that there is no official date yet. We’re hopeful that the Chinese OEM will shed more light on that during the launch event.

Fresh: How To Watch The Live Stream Of The Launch Event Online

Furthermore, it’s most likely that the company will hold the event online. In case you’re wondering how to watch the live stream of the event online, you might have to stop worrying over it.

It’s worth noting that there’s no official release yet regarding whether there’ll be a live stream this year. However, judging from previous releases, the company will likely make use of its usual Huawei Mobile YouTube channel for the launch event. And since that’s the case, you’ll be about to watch the live stream of the event via the YouTube link below.

Supply chain sources told DigiTimes that Huawei has slashed component orders by 30% for the Mate 40 and Mate 40 Pro models. The US government has gone all out to target Huawei since last year. New sanctions come into effect on September 15. Post that, Huawei will not be able to purchase components from Qualcomm or other American companies.

A report claimed in June that Huawei was aiming to sell 8 million Mate 40 series phones in the fourth quarter of 2020. But the order cuts suggest the company is now anticipating a lower demand.

The renders show off its elegant waterfall display and the circular camera design. The renders are reportedly based on “CAD files, leaks, and patent documents.” The device has a minimalistic punch-hole camera on the front.

According to leaks, the Mate 40 series will have a prominent and circular rear camera bump. The Mate 40 would get a triple camera setup while the Mate 40 Pro model would feature four cameras. Both models are rumored to have a glass back panel supported by an aluminum frame in the middle.

The Mate 40 and Mate 40 Pro cases leaked by Digital Chat Station confirm that the Mate 40 series would have a circular rather than square camera bump. The cases don’t have additional holes for the LED flash, indicating that it will be located on the circular camera bump.

The Mate 40 Pro will have hardware volume buttons, unlike its predecessor. The cases indicate that it could have stereo speakers.

The upcoming Mate 40 series will likely be powered by Kirin 1000 chipset, according to Huawei Central. Huawei is yet to release the chip. Rumors have it that all the chips needed this year by Huawei will launch by mid-September.

Talking about Kirin 1000, it’ll likely be the company’s first-ever chipset to be based on 5nm technology. If the rumor comes true, the chipset will be smaller and more efficient than the HiSilicon Kirin 990 used to power Mate 30.

TF International Securities analyst Ming-Chi Kuo has said the same thing about the upcoming processor. However, instead of calling it Kirin 1000, the analyst said the chipset will be called Kirin 1020.

After September 15, Huawei will not be able to use US technology in its Kirin chipsets. But the company has assured its fans that the Mate 40 series would ship with the next-gen HiSilicon Kirin processors. The company is reportedly stockpiling the chipsets before the ban comes into effect.

UPDATE on Processor: The latest reports confirm that the new Huawei Mate 40 series will launch, powered by the next-gen Kirin 9000 processor. As mentioned above, the child will be the first-ever to make use of the 5nm process. Furthermore, according to speculations, the new chipset will feature eight cores. Speaking on that, four of the eight cores will run at 2.04GHz. Also, three of the remaining four cores will perform at 2.54GHz. As far as the last one is concerned, you can expect it to run at 3.13GHz.

Furthermore, a new entry on the Geekbench results website has leaked how the Huawei Mate 40 series chip will perform. According to the leak, it reveals a Huawei NOH-NX9, scoring 3710 for multi-core and 1020 for a single core. You can check below for the screenshot of the performance score. 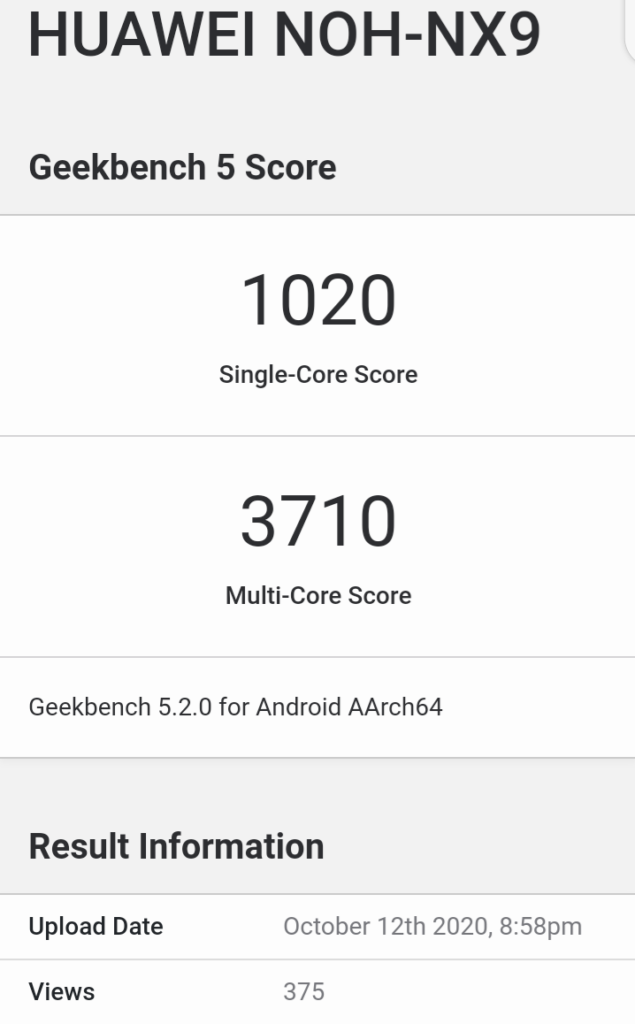 While we aren’t fully sure about the model number, a recent report by NoteBookCheck confirms that the model number “Huawei NOH-NX9” is for the new Huawei Mate 90 Pro variant. The news publication mentioned that it spotted the information in an approval document by NBTC. You can check the site for more information regarding it here.

As for the camera design, rumors have it that the Mate 40 series will be the first to feature Visionox’s under-display front-facing camera. However, a recent leak by Digital Chat Station says the device won’t be coming with an under-screen selfie camera.

A recently leaked render indicates that the Mate 40 Pro would sport a quad-camera system on the back. The LED flash will be located next to the camera module. The device will likely feature a 50-megapixel Leica liquid lens, a 20MP ultra-wide-angle lens, a periscope lens, and a Time of Flight sensor. The circular camera bump doesn’t look out of place, at least in renders.

Here’s the list of the camera specs of the new Huawei Mate 40 series below:

Newly leaked images of the Huawei Mate 40 and Mate 40 Pro camera panels show interesting design. Last year’s Mate 30 series had a circular camera module on the back. The Mate 40 series also sports a circular camera design, but the circle is inside a square.

Both the Huawei Mate 40 and Mate 40 Pro camera panels are labeled ‘3D’. It indicates that they would feature the Time of Flight sensor. The Pro model could also feature a periscope module.

Recently, a report by Huawei Central confirmed that China’s 3C has certified a charger, labeled as HW-110600C00, with a maximum 66W. Considering that, we could see the device come with a powerful charger.

UPDATE on Battery Specs: However, as for its battery capacity, you can expect it to come smaller than the previous release, the Huawei Mate 30 series. The Pro variant of the device came with a battery capacity of 4500 mAh. According to speculations, the new Huawei Mate 40 series will come with a battery of 4400 mAh, capable of offering support for up to 66W fast charging.

According to rumors, the flagship will likely run Android 10, but without the Google Play Services. The US government has banned Huawei from sourcing products and services from US companies. It means the device will face a similar challenge, like that of last year’s flagships.

Although we can’t control the current situation, it’ll be great if Huawei comes to terms with the US to lift the ban. That’ll enable the upcoming device to launch, running Android, with complete Google Mobile Services.

Last year’s Huawei Mate 30 and Mate 30 Pro came with a display notch. Although the devices generally look good, it’ll be great if the upcoming devices come with something entirely different. As such, we expect Huawei Mate 40 to come with an all-screen design, with no notch.

Last year’s flagship came with screen resolutions of 1176 x 2400 and 1080 x 2340 for Mate 30 Pro and the standard Mate 30, respectively. Since these are not quite QHD, we expect the company to do better and offer a QHD+ display on the upcoming devices.

The article has been updated with the latest information on Oct 20, 2020.