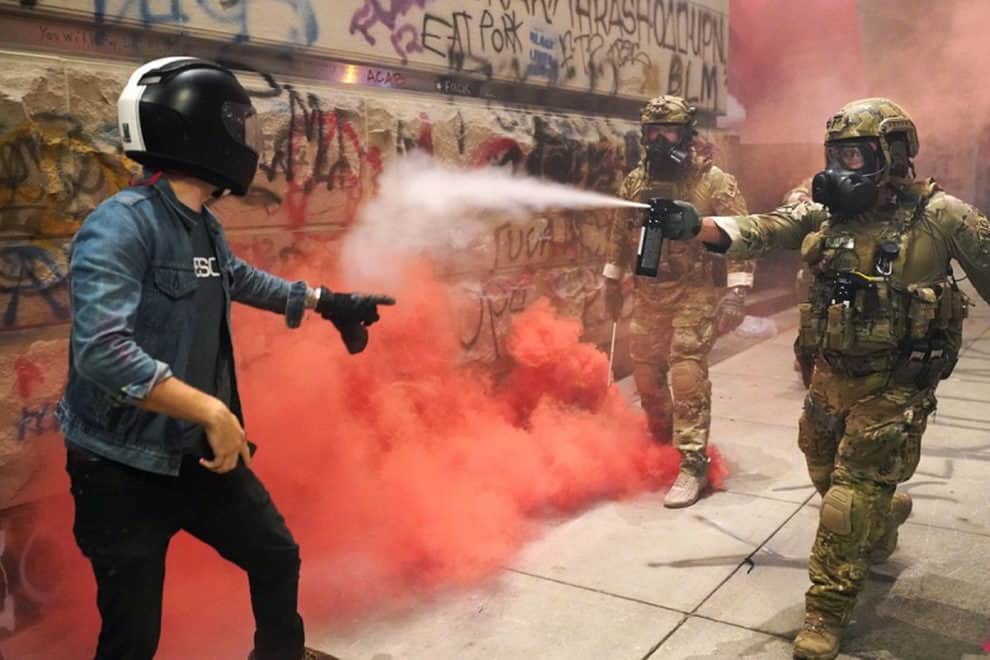 It’s about time that Trump cracked down on the spree of urban terrorism that’s rocked many of America’s main cities over the past two months since his failure to ensure security has made it impossible to promote the country’s socio-economic development and safeguard citizens’ rights, but by doing so, he’s also inadvertently played into his opponent’s hands by doing exactly what they predicted he’d do from the very beginning by climbing their preplanned escalation ladder in the ongoing Hybrid War of Terror on America.

Trump finally crossed the Rubicon by dispatching federal forces in response to the spree of urban terrorism that’s rocked many of America’s liberal dystopian cities over the past two months. It was inevitable that this would happen, which the author foresaw in early June in his piece asking “What Comes After America’s Nationwide Anti-Terrorist Operation?” In fact, during an interview with Iran’s prestigious Kayhan newspaper back in September 2017 that was republished by Oriental Review at the time under the title “Will The ‘Deep State’s‘ War On Trump Lead To An Actual Civil War?“, the author accurately predicted the Hybrid War dynamics that would eventually explode nearly three years later following the “trigger event” of George Floyd’s killing:

The Writing Was On The Wall

“When ‘Antifa’ is heralded as ‘heroes’ despite their wanton destruction and actual fascist-like violent intolerance for any dissenting views, this lends ‘legitimacy’ to their tactics and ‘normalizes’ them, essentially turning far-left street destabilizations into an accepted part of life for the elite because of their weaponized instrumentalization in intimidating the vast majority of Trump’s non-racist, non-fascist base. In turn, this can only provoke a defensive reaction from these people, which spikes the chances of left-right clashes becoming as common in the future in America’s cities as gangland shootings are today.

The reason why the ‘deep state’ and Soros-affiliated Alt-Left groups want to spark such pronounced disorder and chaos in the U.S. is to fuel a Color Revolution, which would then rapidly descend into an unconventional war of urban terrorism and political killings, all with the intent of driving Trump to become the ‘fascist dictator’ that they fear-mongered he’d become, so as to have a basis for pushing through impeachment proceedings against him should racial minorities be killed if he implements limited martial law in response.”

The situation has spiraled so out of control since then because “The Hybrid War Of Terror On America Was Decades In The Making“. “The Syncretism Of Economic Leftism & Social Fascism Is The World’s Newest Danger”, and it’s being experimented with inside of America prior to its perfection and subsequent export across the planet. Leftist-racists such as “Antifa” and “Black Lives Matter” believe that they’re the “vanguard” of the so-called “revolution” whereas in reality they’re really just the “useful idiots” of the “deep state’s” counter-revolution against Trump. The resultant mobs de-facto function as Democrat-controlled political militias for intimidating the party’s ideological opponents and foreshadowing the dystopia of a possible Biden presidency.

A Dictator’s Secret Police Or A Decisive Security Response?

In an effort to reverse this dark scenario, Trump dispatched federal forces to America’s liberal dystopias so as to restore law and order exactly as he promised. This move has been criticized by his opponents as equivalent to a “dictator desperately siccing their secret police on peaceful pro-democracy protesters”, though that perception is nothing more than an information warfare narrative. All states across the world have instruments to use for responding to national security crises such as this one. Security is worsening by the second, and the country’s socio-economic development and the safeguarding of its citizens’ rights can’t be guaranteed as a result. The federal government would soon cease to effectively function in many cities if it failed to act at this point.

The reason why their false narrative is so compelling, however, is because the US successfully employed it for decades against dozens of its geopolitical targets. It did so in order to improve its soft power during the Old Cold War by contrasting “American democracy” with “Soviet communism”, and later, the “Liberal/New World Order” with the “illiberal/multipolar” one that recently started to emerge as a response to previously uncontested American unipolarity. Ironically, the US itself started becoming more “illiberal” and “multipolar” (the latter through its recent “Lead From Behind” stratagem) under Trump due to his efforts to dismantle the Old World Order, which is why its traditional information warfare narratives can now be used against him.

Deciphering The Reasons Behind Trump’s Delay

Acknowledging this (even if the reader doesn’t agree with the author’s interpretation), the question then becomes one of why Trump waited two long months to undertake this decisive security response. It can’t be known for sure, but two explanations are the most reasonable. The first is that he consciously decided against it until he became convinced that everything had totally spiraled out of control and that no other option was left, while the second is that he had wanted to do this for a while now but faced some serious resistance from the “deep state”. Expanding upon the second explanation, it would naturally follow that he must have overcome the most serious obstacles in order to finally be able to carry out his supposedly long-planned course of action.

Whatever the real reason may be, Trump’s definitely climbing the escalation ladder that his opponents had prepared for him. They predicted from the very beginning that the man who they’ve spent years portraying as a “racist-fascist dictator” would eventually “kill his own people”, especially “peaceful pro-democracy protesters”, and accordingly have a plan for how to respond to this development. It might have been out of fear of falling into what he regards as their “trap” that Trump held off so long before ordering this decisive security response, but now that he’s done so, there’s no going back. America’s already in the throes of a (counter-)”revolution” with urban terrorism, statue-toppling, and attacks on police, and it might soon get a lot worse.

The liberal dystopias of America’s major cities are poised to become ground zero in the Hybrid War of Terror on America. Trump’s federal intervention is being dangerously misportrayed as an “invasion” by a “racist-fascist dictator”, thus “legitimizing” the use of lethal force against the security services per typical “insurgency” trends. The US’ “deep state” divisions might literally tear the country apart as different levels of government clash with one another (local/state vs. federal), with innocent citizens caught in the middle. It was precisely this scenario that Trump might have tried to avoid for so long, though the argument can also be made that the tipping point was already passed once he failed to decisively intervene a week into this unprecedented crisis.

Describing the contemporary state of affairs in America as a “civil war” is misleading because it conjures images of two opposing armies, hence why the term Hybrid War is used instead since it encapsulates the true nature of this current conflict. It’s multifaceted, unconventional, and all-encompassing. It’s also been waged for a while already but only just recently reached its kinetic phase. Each side is fighting to determine America’s destiny in an epic zero-sum struggle that will ultimately result in one of them being the victor and the other the vanquished. Considering everything that’s at stake and just how deeply rooted this Hybrid War is, it’s not going to be over anytime soon no matter who wins in November, meaning that the worst may be yet to come.