Since its release in mid-September, iOS 16 has been a wonderful enhancement to the iPhone operating system. Apple released iOS 16.1.1 on November 9 which featured a variety of minor bug fixes and security enhancements. Several iPhone users have already reported that their wallpaper has disappeared or changing to black after iOS 16.1.1.

Reports of iPhone changing wallpaper to black after iOS 16.1.1

Customers who have experienced this issue allege that when they swap to the lock or home screen, the wallpaper shifts to a black backdrop.

The right wallpaper is displayed after restarting the iPhone; but, the next time the phone falls asleep, it shows a black backdrop. 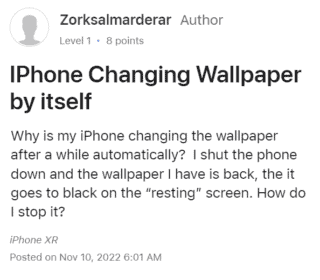 “I have an iPhone 12 updated to iOS 16. The background and wallpaper constantly change itself to Black, automatically. I have to power down my phone in order to recover my Lock Screen Photo as well as the home screen background (or wallpaper). Is this a setting I have set incorrectly or is there a fix to stop this?” a user posted.

“I’m having a frustrating problem with my iPhone 13 Pro Max running 16.1. At random times, the wallpaper disappears leaving me with a black screen. I have to reboot to get the wallpaper back momentarily, but it disappears again,” another posted.

Moreover, as noted by multiple users, this issue started with iOS 16.1 and remains even with the latest iOS 16.1.1.

Among many of the complaints are some fixes that can alleviate the problem. First, apply the wallpaper you previously used. 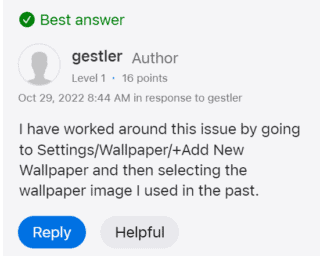 Another user stated that the problem was caused by a failed background settings transfer between iOS versions. Fortunately, you can regain the original wallpaper image by following these steps:

1. Using iTunes make a full backup of your iPhone
2. Download, install, and run iExplorer on a Sandbox instance
3. Copy the main plist and manifest files to a folder inside Sandbox
4. Tell iExplorer to open that folder as the iTunes backup location

Users can reach Apple Support for assistance with this problem by clicking here.