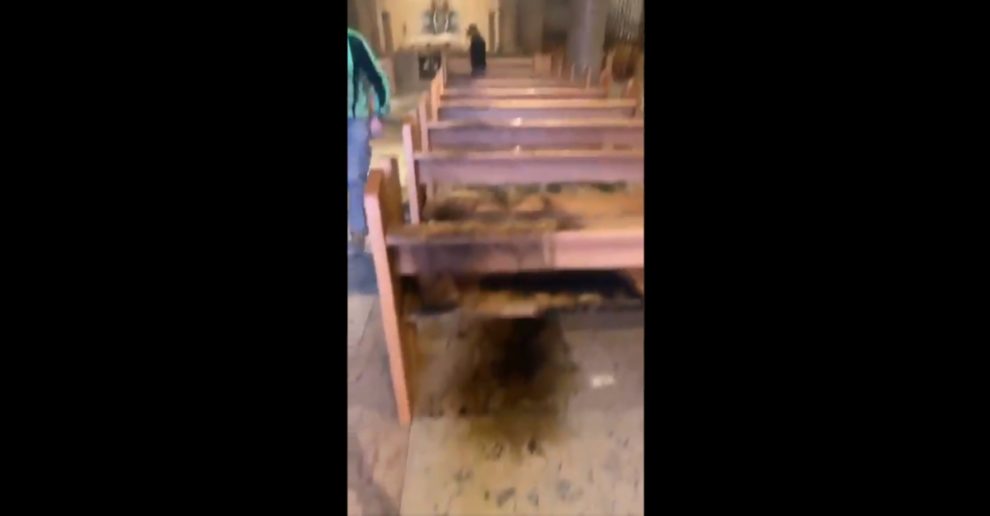 According to recent reports, an Israeli settler has attempted to set fire to the Gethsemane Church located in Jerusalem. The church is located in the Mount of Olives region in occupied East Jerusalem according to locals.  Eyewitnesses to the incident narrate that an unknown Israeli settler sneaked into the premises of the account. After making his way in, he proceeded to pour flammable liquid inside. The flammable liquid set the church on flames.

The reasons for doing so are unknown. The settler also tried to set some wooden pews on fire that were lying around. He was thwarted by local Palestinian citizens who then handed him over to the authorities. Police promptly arrived at the scene to handle the situation.

According to local media, the Israeli settler was an extremist Jewish. Video footage circulating online shows police taking the Israeli settler into custody. The unnamed man seems to be middle-aged, he has a white beard and is wearing a ragged sweater. Reports suggest that the suspect is 49 years old. He is currently in police custody and undergoing investigation.

BREAKING: An Israeli settler arrested after attempting to set fire in a Gethsemane church in #Jerusalem.#Israel pic.twitter.com/F82rT4GZgK

Video footage of the church circulating online shows black marks on fire on the benches and floor. The Palestine Liberation Organization tweeted, “While the inauguration of the new Latin Patriarch was taking place at the Holy Sepulchre, Palestinian young men from East Jerusalem today prevented the burning down of Gethsemane Church at the hands of a settler terrorist that managed to cause damage with the fire he started.”

Jerusalem has a long history of conflicts. In 2015, several Jewish extremists were accused of an arson attack. The alleged attack resulted in extensive damage to the Church of the Multiplication of the Loaves and Fish. This happens to be a popular pilgrimage site on the Sea of Galilee located towards the north of Israeli-occupied historical Palestine.

The Gethsemane Church, also called the Church of All Nations, happens to be a Catholic church built on the traditional site of the Garden of Gethsemane. Christians believe that this is the very site where Jesus was betrayed by Judas. Judas was one of Christ’s devout followers. Jesus was arrested from the Garden of Gethsemane by Romans before being crucified by the authorities. The sight holds immense religious value for Christians.

Damaging places of worship is a crime in almost all countries of the world. Not only is such an act highly unethical, it also constitutes as a crime. People possess the right to practice their religion with freedom. Hurting the sentiments of a community is a violation of law and all basics of human decency. The unnamed Israeli settler is likely to be tried in a court of law.