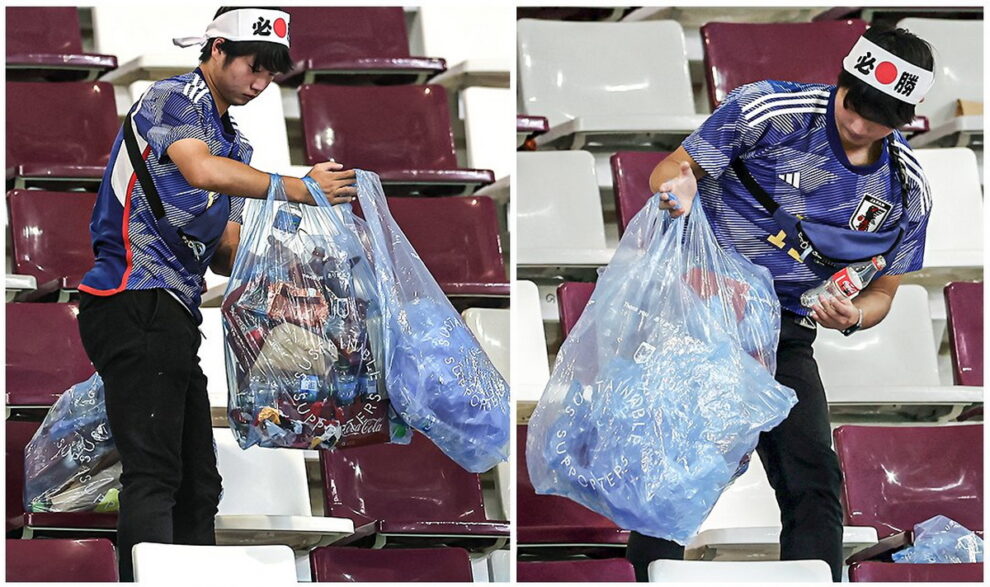 It was one of the most memorable moments in Japan’s football history after they defeated Germany 2-1 in the 2022 World Cup.

A gesture of humanity: Japan fans cleaned up trash at stadium after match with Germany

Japanese football fans have brought a lot of humanity to this week’s 2022 World Cup in Qatar.

After seeing their team come back from a goal down to defeat the former champions, the Samurai Blue fans remained in the stands at the stadium. But not to celebrate the victory, but to ensure they left the place exactly as they found it.

After their shocking win against Germany, Japan fans stayed after the match to clean up the stadium.

During the tournament’s opening match, Japanese supporters picked up bottles and leftover food in the seats despite the fact that their team was not even in the competition. They even distributed trash bags to tidy up after fans who had attended the previous game.

Omar Al-Farooq, a Bahrain influencer, filmed footage of the Japanese supporters’ nice actions following the tournament’s opening match and posted it to his Instagram story. He also asked the supporters why they chose to stay and help clean up the mess.

“We are Japanese, and we do not leave rubbish behind us, and we respect the place,” one fan told the influencer.

Al Farooq was moved by the kind deeds and decided to assist the Japanese fans in cleaning up the mess.

The Japanese supporters also picked up Ecuadorian and Qatari flags that had been abandoned on the ground, claiming that the flags “demand respect.”

This is a common practice among Japanese fans.

They assisted with rubbish collection at the 2018 World Cup in Russia. Following that tournament’s 3-2 loss to Belgium, Japanese fans were observed collecting rubbish and cleaning all of the seats inside Rostov Arena.

From demons and mindfulness to Marie Kondo’s tidying up, Japan’s ‘waste not, want not’ mindset has strong religious and cultural origins.