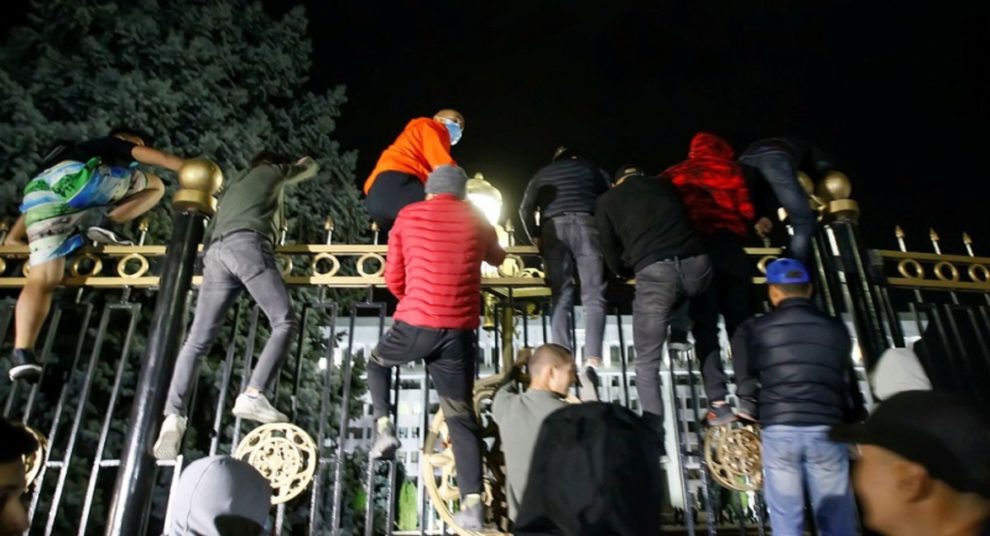 The sudden outbreak of Color Revolution unrest in the historically unstable Central Asian country of Kyrgyzstan following recent parliamentary elections in this Russian CSTO mutual defense ally intensifies the US’ Hybrid War “containment” of Russia when seen in the context of the ongoing regime change efforts in fellow ally Belarus as well as CSTO-member Armenia’s dangerous efforts to provoke a Russian military intervention in support of its illegal occupation of universally recognized Azerbaijani territory.

The historically unstable Central Asian country of Kyrgyzstan is once again in the midst of Color Revolution unrest after this Russian CSTO mutual defense ally’s latest parliamentary elections were exploited as the pretext for members of the non-systemic opposition to torch their seat of government and free former President Atambayev who was arrested last year on charges of corruption. This sudden crisis is actually the third serious one in the former Soviet space in just as many months following the ongoing regime change efforts in Belarus since August and Armenia’s dangerous efforts since the end of last month to provoke a Russian military intervention in support of its illegal occupation of universally recognized Azerbaijani territory. Crucially, all three of the aforementioned countries are Russia’s CSTO allies, and their respective crises (provoked to varying extents by the US) intensify the American Hybrid War “containment” of Russia.

The US’ Triple Hybrid War “Containment” Of Russia

The author has written extensively about the Belarusian Color Revolution campaign and Armenia’s aggression in Nagorno-Karabakh, but those who aren’t familiar with his analysis of those issues can refer to the two articles hyperlinked earlier in this sentence for a quick overview. The present piece aims to inform the audience about the complex dynamics of the Kyrgyz Color Revolution crisis and the impact that it could have on the US’ recent Hybrid War “containment” offensive along the western, southern, and eastern peripheries of Russia’s so-called “sphere of influence”. The pattern at play is that the US is trying to provoke a Russian military intervention in one, some, or all three of these Hybrid War battlefronts through the CSTO, but the Kremlin has thus far avoided the trap of these potential quagmires. Lukashenko tried do this with his ridiculous claims about a speculated Polish annexation of Grodno while Pashinyan wants to provoke Azerbaijan into attacking Armenian cities to trigger a similar intervention scenario, hence Armenia’s attack on its rival’s Ganja in order to bring this about.

Kyrgyzstan is an altogether different powder keg, however, since it has a recent history of close to uncontrollable inter-ethnic and political violence after its last two Color Revolutions of 2005 and 2010, especially the latter. The author explained all this in detail in his April 2016 analysis of the US’ history of regime change attempts in the region, which comprises one of the chapters of his 2017 ebook on “The Law Of Hybrid Warfare: Eastern Hemisphere”. He expanded upon his research in this direction in August 2019 following President Jeenbekov’s arrest of former President Atambayev, his former mentor, which almost plunged the country back into a state of de-facto civil war. It was explained that “Kyrgyzstan must ‘cleanse’ its ‘deep state’ (permanent bureaucracy) simultaneously with cracking down on organized crime (which is sometimes affiliated with some ‘deep state’ forces).” This is the only way to combat the destabilizing clan-based nature of the country (worsened by Western NGOs and diplomatic meddling) that’s responsible for its regular unrest.

Will The Crisis From 2010 Repeat Itself?

The present situation is so dangerous though because the last round of Color Revolution unrest in 2010 sparked accusations of ethnic cleansing against the local Uzbeks that inhabit Kyrgyzstan’s portion of the divided Fergana Valley. That in turn almost provoked an international conflict between both landlocked states that was thankfully averted at the last minute by Tashkent’s reluctance to worsen the security situation by launching a “humanitarian intervention” in Russia’s CSTO ally (one which could have also been exploited to promote the concept of “Greater Uzbekistan” over the neighboring lands inhabited by its ethnic kin considering the country’s closer coordination with American strategic goals at the time). Uzbekistan has since moved closer to Russia after the passing of former President Karimov, but its basic security interests remain the same, particularly as far as ensuring the safety of its ethnic kin in neighboring states. Any repeat of the 2010 scenario could therefore return Central Asia to the brink of war unless a Russian diplomatic intervention averts it.

The Threat To Russian Interests

From the Russian perspective, Kyrgyzstan’s capture by Western-backed political forces could lead to long-term security implications. The state’s potential internal collapse could turn it into a regional exporter of terrorism, especially throughout the volatile Fergana Valley but also across China’s neighboring region of Xinjiang if a new government decides to host Uighur terrorists. The soft security consequences are that Kyrgyzstan’s Color Revolution government could reduce its commitment to the CSTO and Eurasian Union up to and including the country’s potential withdrawal from these organizations if the new power structure isn’t co-opted by Russian-friendly forces first. It’s possible, however, that Moscow might succeed in mitigating the blow to its geopolitical interests in the scenario of a regime change in Bishkek since it had previously worked real closely with Atambayev (who’s the most likely candidate to seize power, either directly or by proxy), though only if it can prevent a civil war from breaking out first. That might necessitate a CSTO intervention, however, which is risky.

As it stands, the US’ Hybrid War “containment” of Russia is making progress along the western, southern, and eastern periphery of the Eurasian Great Power’s “sphere of influence”. Belarus is no longer as stable as it has historically been known for being, Armenia is still trying to trick Russia into going to war against Azerbaijan (and by extension Turkey), and Kyrgyzstan is once again on the verge of a collapse that could take down the rest of Central Asia in the worst-case scenario. Having shrewdly avoided the first two traps, at least for the time being, Russia is now being challenged with the most serious crisis of the three after the latest events in Kyrgyzstan. The country’s clan-based nature, the proliferation of Western NGOs, and Western meddling in its admittedly imperfect democracy make it extremely unstable, thus heightening the risks that any well-intended Russian military stabilization intervention via the CSTO could entail, perhaps explaining why one never happened in 2010 during more dangerous times. The Kremlin will therefore have to carefully weigh its options in Kyrgyzstan.