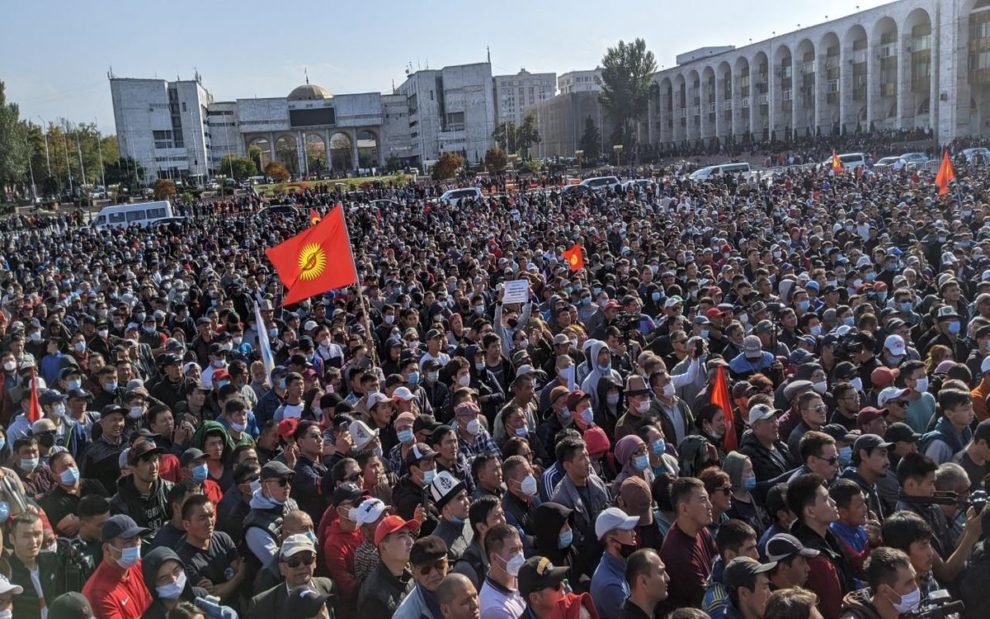 Thousands of people have gathered together to protest against the results of a recent parliamentary election. The Bishkek, Kyrgyzstan protests surfaced to raise voice about the allegations of vote-buying and fraud. Police acted promptly by breaking the Biskek Kyrgyzstan protests by using water cannons, stun grenades, and tear gas. Photos and videos from the scene show violence on a massive scale.

Protests break out at Bishkek, Kyrgyzstan

Photos and videos from the protest scenes at Bishkek, Kyrgyzstan show people trying to struggle their way inside the gate at the government headquarters. Hundreds of protestors are seen rallying against the results of a parliamentary vote in Bishkek, Kyrgyzstan held on Monday, Oct. 5, 2020. Thousands of protestors have gathered right in the center of Kyrgyzstan’s capital to protest against the results of a parliamentary election. The initial results of the parliamentary vote illustrated that the majority of seats had been secured by the two parties with ties to the ruling elites. The connections between the ruling elite and the winning party raised allegations of vote-buying.

The government officials stated that the protesters demonstrating against the results of the parliamentary election successfully stormed into a building that was utilized as the country’s parliament and presidential offices. This violent demonstration left one person dead and approximately 590 wounded following violent clashes with police. Radio Free Europe posted pictures and videos of protesters inside President Sooronbai Jeenbekov’s office, the office is located in a building known as the White House in the capital, Bishkek.

The photos which were posted on Monday evening show demonstrators posing at the president’s desk and in the other areas of the office. Reports revealed that at least 4,000 protesters had gathered at Bishkek’s central square on early in the day to protest against the election. Their primary claims were that the results were fraudulent. Police employed considerable force to curb the violent threat posed by these protestors.

Photos and videos from the protests show violent clashes

In the hours that followed the protest, approximately 120 people were hospitalized after sustaining several injuries during the clashes that broke out between the police and protesters. The protesters demanded that the vote results be declared invalid. The Central Election Commission stated on early Tuesday that they would consider this request.

While several protesters gathered in different provincial centers, many of Jeenbekov’s supporters also gathered in the southern city of Osh. Osh is where Jeenbekov’s brother called for unity and order. Despite the clashes between protestors and the police, Jeenbekov’s office released a statement saying that he was “in control of the situation and expresses confidence that all political forces will put the interests of the country above their own.”

It is reported that the protestors also allegedly freed the former President Almazbek Atambayev from a jail cell located in the country’s national security committee building. An eyewitness narrated the entire incident to the press, he said that the demonstrators were successful in freeing Atambayev “without force or use of any weapons.”

Video shows shooting at the car of Kyrgyzstan ex-President Atambayev