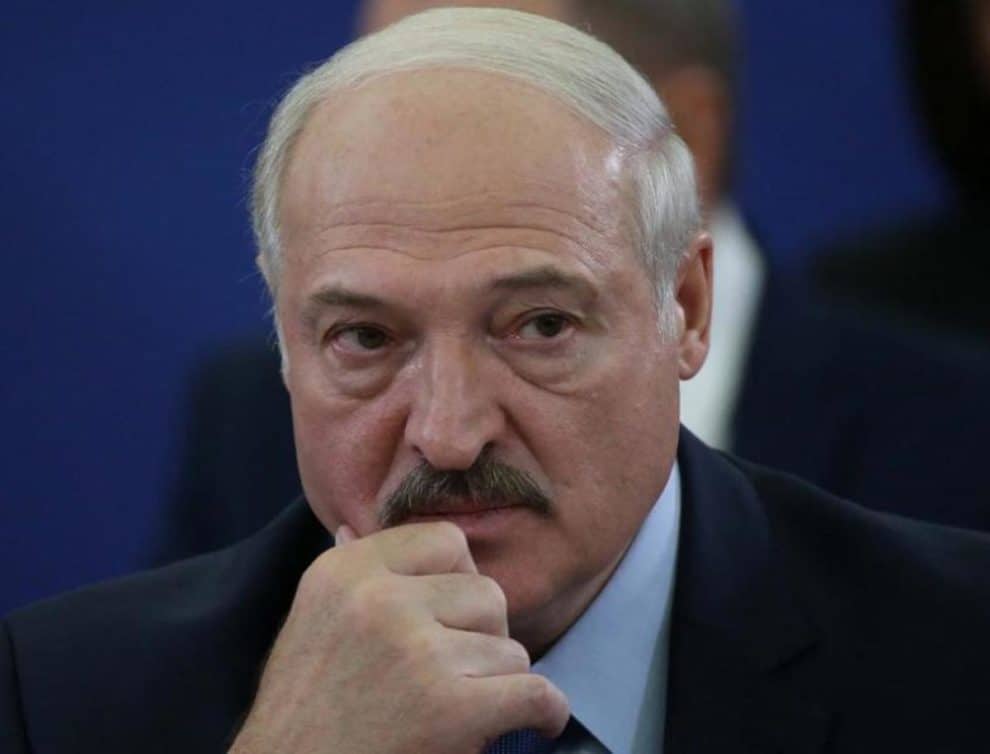 Belarus President Lukashenko’s announcement that presidential elections will follow a planned constitutional referendum possibly paves the way for a “phased leadership transition” in the Color Revolution-beleaguered former Soviet Republic, one which opens up an opportunity for Russia to protect its national interests if a friendly candidate like Viktor Babariko comes out on top or ends up sharing power with a Western-friendly one like Sergei Tikhanovsky.

The latest twist in the Hybrid War on Belarus came after President Lukashenko’s announcement on Monday that presidential elections will follow a planned constitutional referendum, which was curiously preceded by him promising earlier that same day that “There will be no other elections, unless you kill me.” This surprising about-face speaks to how vulnerable he feels after a week of increasingly intense protests that are now transforming into a nationwide strike, albeit a limited one at this moment but which could nevertheless deal serious damage to the economy in a short amount of time if this movement suddenly spreads throughout the country. Even more interestingly for many observers is that this reversal came just a day after his second conversation with President Putin over the weekend where the Russian leader reaffirmed his country’s CSTO mutual defense obligations to Belarus, which led to speculation among some that Putin could “pull a Crimea” there (though, as the author argued, likely only if he was tricked by his counterpart into doing so).

No Last Stand For Lukashenko?

This suggests that Russia realized the game that Lukashenko was trying to play and wisely advised him against it behind closed doors, perhaps even “encouraging” him to change his mind about new elections in order to initiate a “phased leadership transition” in the Color Revolution-beleaguered former Soviet Republic if its leader is desperate enough to remain in office that he might have been seriously contemplating tricking Russia into “pulling a Crimea” for that purpose. In any case, while Lukashenko’s decision is pragmatic and could theoretically help his country escape its worst-ever political crisis (especially if he declines to run again), it also signifies weakness in the eyes of the opposition and could inadvertently serve to embolden them to intensify their efforts to seek his ouster. As the “father of the nation”, he’s resolutely against doing anything that tramples on the constitution and risks turning his country into a similarly failed state as post-Maidan Ukraine is. It’s for that reason why he warned that “the fall of the first president will mean the beginning of your end. You will always stand on your knees, like in Ukraine and other counties, and pray to someone.”

It seems like Lukashenko finally realized that the scenario of his possibly inevitable ouster by one way or another — be it economic collapse caused by a nationwide strike, a “deep state” coup by his security services, resignation, etc. — is becoming more likely by the day, which would explain why he decided to start preparing for a “dignified” exit that preserves the rule of law as best as possible under the circumstances. His solution is to reform the constitution in order to “redistribute power“, and while cynics might think that this is just a ploy for him to buy time with the hope that the regime change protests fizzle out, it’s expected that they’ll actually intensify since the opposition smells blood and knows that he’s the weakest that he’s ever been in his political career. This means that he’ll be pressured from below (Color Revolution) and above (the West and possibly even Russia) to expedite the interconnected referendum-election process. It’s unclear at this moment what the timeline for that might be, but it would have to be sooner than later if he wants to save his skin.

When One Door Closes, Another Opens

While some might bemoan the thought of a seemingly “pro-Russian” leader “falling”, this scenario doesn’t necessarily have to be as dark as some may think. In fact, a “phased leadership transition” might actually be the best option that Russia could have hoped for in this crisis, hence why it might have even speculatively encouraged it behind the scenes. The Kremlin would of course have preferred for the Color Revolution never to have been launched in the first place, but since it has and there’s no going back to the “status quo ante bellum”, it makes sense to try to responsibly manage the transition in order to decrease the chances of it spiraling out of control. What’s meant by this is that Russia now has the opportunity to cultivate relations with various opposition figures (provided of course that a Kiev-like coup doesn’t soon take place which prevents this from happening) to ensure that its national security interests are taken into account by the most likely government to follow in exchange for certain economic and energy “perks”.

Specifically, Russia must absolutely see to it that the agreement to operate its missile attack warning facility and submarine communications one in Belarus is renewed upon its expiration next June otherwise it stands to lose some of its nuclear second-strike capabilities which have hitherto prevented NATO from launching a nuclear first strike against it after the end of the Old Cold War. In exchange, Russia could offer the post-Lukashenko government more generous loans with better interest rates and guarantee that it’ll continue subsidizing Belarus’ cheap energy imports that have thus far upheld its quasi-“socialist” economic model of development. Of course, whoever comes after Lukashenko will probably liberalize the economy in order to benefit their foreign patron(s), but the shock wouldn’t be as severe if the country could count on cheap Russian resources unlike the present after Moscow canceled these benefits following a highly publicized dispute at the beginning of the year partially connected to Minsk’s refusal to integrate more closely within the “Union State” framework.

In spite of all of this, Russia could still stand to lose so long as the post-Lukashenko government is entirely dominated by pro-Western forces, which is why it’s crucial to see to it that a friendly candidate has a chance at winning the highest office of the land. That individual is widely speculated to be former Belgazprombank Chairman Viktor Babariko, previously described as Lukashenko’s “main rival” who was jailed earlier this summer ahead of the election on corruption charges that he claims are politically motivated and subsequently barred from running. It’s quite possible that Lukashenko jailed him both out of fear that Babariko would best him at the polls but also to send a friendly signal to the West about his geopolitical intentions after the vote (prior to his “new partners” deciding to overthrow him at the last minute once they sensed just how weak he was after he’d so dramatically distanced himself from Russia with that move and the Wagner provocation). For the allegedly Russian-friendly Babariko to stand any chance at winning, though, he must first be released from jail.

Therein lies the role that the Western-friendly opposition could play, albeit inadvertently. Their hodgepodge of leaders have mostly fled from Belarus or are in prison, so they have their own interests in pressing for the release of so-called “political prisoners” and dropping any charges against those who have yet to be detained. In pursuit of this, they might either intensify their Color Revolution pressure upon the government and/or threaten to boycott the upcoming referendum-elections in order to deny them “international legitimacy”. Lukashenko might therefore have no choice but to bend to their demands, even going as far as to release all such individuals including Babariko, who likely isn’t on the list of those that the Western-friendly opposition wants to save. Nevertheless, the Belarusian leader would have the pretext to do so on the basis of complying with the Western-friendly opposition’s request, which thus opens up the opportunity for Babariko to run in the upcoming election.

That’s actually not a bad scenario for the Western-friendly opposition either since the majority Russian-friendly population might also protest and/or boycott the polls unless the candidate of their choice is allowed to participate in the campaign. While some think that the West only wants to sow havoc as part of its strategy of weaponizing chaos theory against Russia through a series of self-sustaining Hybrid Wars (which is certainly true to a great extent when it comes to the US’ grand strategy against its chief rivals), that might not necessarily be the case with the ongoing Hybrid War on Belarus. Such an outcome could destroy the valuable state-owned assets that Western oligarchs want to poach as well as lead to unpredictable consequences for neighboring Poland, which is the US’ top European ally nowadays and the leader of the American-backed “Three Seas Initiative” (TSI) for controlling the ultra-strategic Central & Eastern European space between Russia and Germany via a series of proxies.

Taking these strategic determinants into account, it’s actually fairly sensible for the Western-friendly opposition to allow Babariko be released and ultimately run in the upcoming presidential elections (which Lukashenko might not participate in) so as to avoid that potentially counterproductive scenario while also securing the vote’s “international legitimacy”. Even so, however, it’s unlikely that they’d accept him winning outright, so the most probable outcome is actually Babariko and Sergei Tikhanovsky (the husband of Svetlana Tikhanovskaya, who ran in her spouse’s place after he was arrested and officially won 10% of the vote) entering into a “power tandem” to jointly rule the country. Although foreseeably unstable, it’s arguably the best scenario in the event that Lukashenko’s ouster is inevitable (no matter how long it takes and regardless of whether it’s abrupt or “managed” like he nowadays has hinted). Lukashenko would have left, Western and Russian “big businesses” could both take part in Belarus’ economic liberalization, cheap Russian energy could be guaranteed, and Russia’s bases could be secured, which might be a true “win-win” for all relevant political players in this crisis (except perhaps the masses who’d struggle during the difficult transition to a neoliberal economic system).

To be clear, the author isn’t personally endorsing this course of events nor is there any evidence that Russia is in support of a “phased leadership transition” playing out in Belarus, let alone in favor of one particular candidate (Babariko) coming out on top in the next presidential elections. The purpose of this analysis was to explore the interplay of domestic and foreign interests in this crisis with a view towards brainstorming a “political solution” influenced by what Lukashenko himself hinted when he announced that presidential elections will follow the promulgation of a new constitution whenever that might be. The best-case scenario would of course have been for the Hybrid War on Belarus never to have been unleashed, and then for Lukashenko to have secured his seat in office, but since the proverbial genie is already out of the bottle and his political future looks dimmer by the day, it’s relevant to wonder what might come next, hence this analysis. Looking forward, it’s difficult to predict what will happen, but this piece should hopefully point readers in the general direction that events are headed.