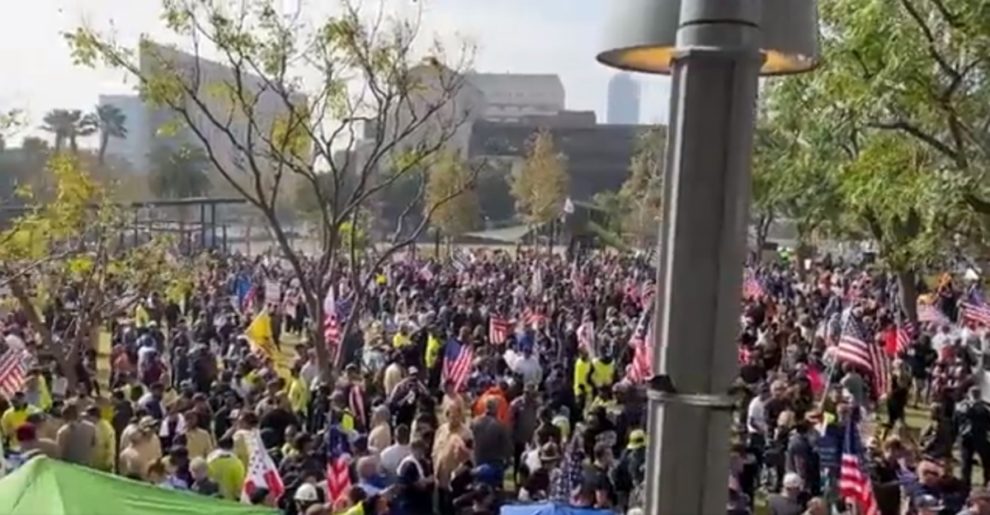 On Monday morning, hundreds and thousands of people gathered in the Grand Park outside Los Angeles (LA) City Hall to protest a new citywide vaccine mandate. Members of the Los Angeles Police Department, the fire department, and other city offices were reportedly among those in attendance.

Many of the protesters carried American flags and signs condemning mandatory vaccinations. In the midst of the large crowd, only a few people were wearing masks.

Protesters reportedly chanted “We will not comply,” holding signs criticising various L.A. city and county vaccine rules, including those requiring civil-service employees to be vaccinated against COVID-19 in order to keep their jobs.

The employees protesting at Grand Park said they were prepared to lose their jobs due to the city’s vaccination mandate, which gives them until December 18 to comply.

Starting November 4, those rules will apply to residents as well—proof of vaccination is now required for anyone aged 12 and up to enter most indoor businesses across the city, including restaurants, gyms, and personal care establishments. L.A. County mandated the requirement of proof of vaccination to enter indoor nightlife establishments such as bars and clubs on Thursday.

The city’s new “SafePassLA” rules are among the most stringent COVID-19 health and safety protocols in the country.

The March for Freedom rally took place on the same day that the city’s proof of full COVID-19 vaccination mandate, one of the strictest in the country, went into effect.

Over 1000 show up so far to the March For Freedom Rally in LA to protest vaccine mandates pic.twitter.com/PIRz17xcaB