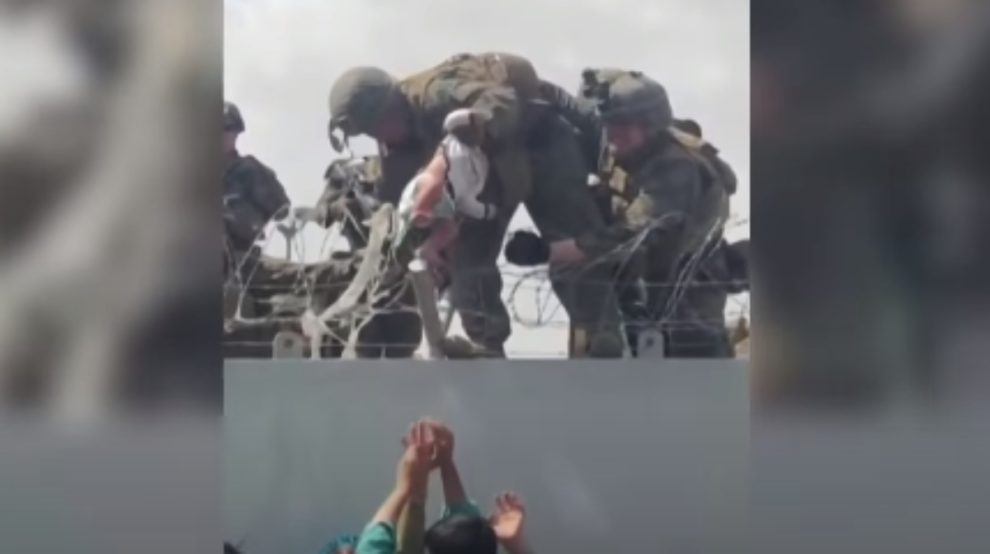 Hunter Clark, A US Marine who rescued a baby in Kabul during the botched withdrawal of US forces from Afghanistan is reportedly being investigated after former President Donald Trump invited him up onto a rally stage on September 25.

Clark, a lance corporal, was one of the soldiers stationed at the airport last month. In the video, he can be seen standing on a wall while a man desperately hands him the baby.

NEW 🚨 Afghans handing over their kids to troops at Kabul Airport amid chaotic situation outside the airport pic.twitter.com/U9icWgCErK

Cheers greeted Lance Corporal Clark as he approached the stage, and Trump referred to him as a “handsome guy” during his approach.

Clark told the crowd, “Hey, my name is Lance Corporal Hunter Clark, and I’m here from Warner Robbins, Georgia. I am the guy that pulled the baby over the wall, and it’s definitely probably one of the greatest things I’ve done in my entire life.”

“I just want to thank all the support from all y’all. It really means a lot and I’m glad to be home now,” Clark added.

Video: Marine who pulled baby in Kabul appears on stage with Trump

On Saturday, he shared the stage with Trump at a “Save America Rally” in Perry, Georgia. According to Task & Purpose, his command is now investigating whether his appearance violated the military’s ban on active-duty troops engaging in partisan political activity.

“The 24th Marine Expeditionary Unit (MEU) has initiated a command investigation regarding LCpl Hunter Clark’s attendance at the event last weekend to determine if any DoD policies were violated,” said Capt. Kelton Cochran, a spokesman for the 24th MEU. “Any details pertaining to this incident are not releasable while the investigation is being conducted.”

According to Task & Purpose, Clark, was not in uniform, was invited on stage by the 45th President “as part of a public show of support for U.S. troops.”