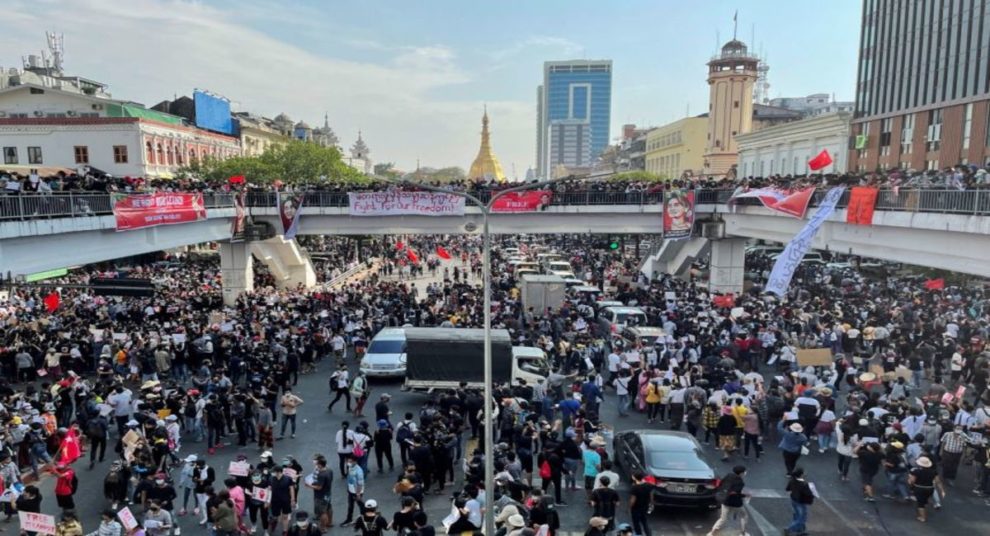 Martial law was imposed in different parts of Myanmar’s second-largest city Mandalay and Yangon on Monday, after hundreds of thousands rallied across the country against the coup and the military issued a stern warning against further protests. Myanmar declared martial law following the third day of huge street protests, imposing an overnight curfew and banning all gatherings of more than five people in an attempt to stem widespread opposition to its Feb. 1 coup.

“This order is applied until further notice,” one Mandalay township statement said. “Some people are behaving in a worrying way that can harm the safety of public and law enforcement. Such behaviors can affect stability, the safety of people, law enforcement, and the peaceful existence of villages and could create riots, that’s why this order bans gathering, speaking in public, protest by using vehicles, rallies,” according to the statement.

Tens of thousands of protestors came out on the streets across the Southeast Asian nation on Monday, using social media to quickly mobilize supporters with three main demands: the release of civilian leaders including Aung San Suu Kyi, recognition of the 2020 election results won by her party and a withdrawal of the military from politics.

The military imprisoned Ms. Suu Kyi and several other members of her National League for Democracy party last week, ending a decade of partial civilian rule and triggering international condemnation.

“Down with military dictatorship” and “release Daw Aung San Suu Kyi and arrested people”, protesters shouted, flashing the three-finger salute that has become a symbol of their movement as car horns were honked in support.