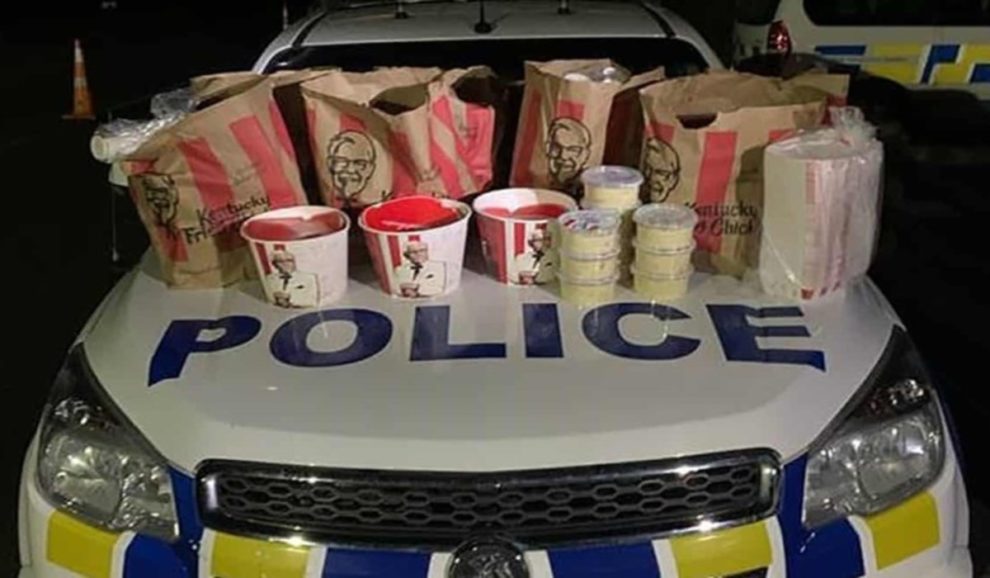 Police in New Zealand have arrested two suspects for attempting to enter a locked-down Auckland with a trunk full of Kentucky Fried Chicken (KFC) meals.

According to reports, two men have been charged by New Zealand authourities after being caught attempting to enter largest city Auckland with a large stash of KFC in the trunk of their car – in violation of strict COVID-19 lockdown rules.

Police were on patrol Sunday on the outskirts of Auckland when they “noticed a suspicious-looking vehicle traveling on a gravel road, and upon seeing the police car, the vehicle did a U-turn and sped off trying to evade police,” a spokesman said.

According to reports, police apprehended the couple after noticing their suspicious vehicle and recovered a large quantity of KFC takeaways as well as US$70,000 in cash and other items.

“The vehicle was searched and police located the cash, alongside empty ounce bags and a large amount of takeaways,” added the police official, who said over NZ$100,000, or $70,000, was found.

Images obtained by police show at least three buckets of chicken, several containers of coleslaw, and an unspecified quantity of fries.

The suspects were reportedly coming from Hamilton, about 120 kilometres from Auckland, which is under strict lockdown to control the spread of Covid-19.

According to CNN, restaurants, including takeout services, remain closed and everyone is required to stay at home under Auckland’s Level 4 lockdown rules, which are the strictest in the country.

The rest of the country has reached Level 2, with restaurants, cafes, bars, and nightclubs open.

According to New Zealand’s Covid-19 Public Health Response Act, the suspect could face up to six months imprisonment and a fine over smuggling attempts.

According to Johns Hopkins University, the country of about 5 million people has reported over 4,800 confirmed COVID-19 cases and 27 deaths.