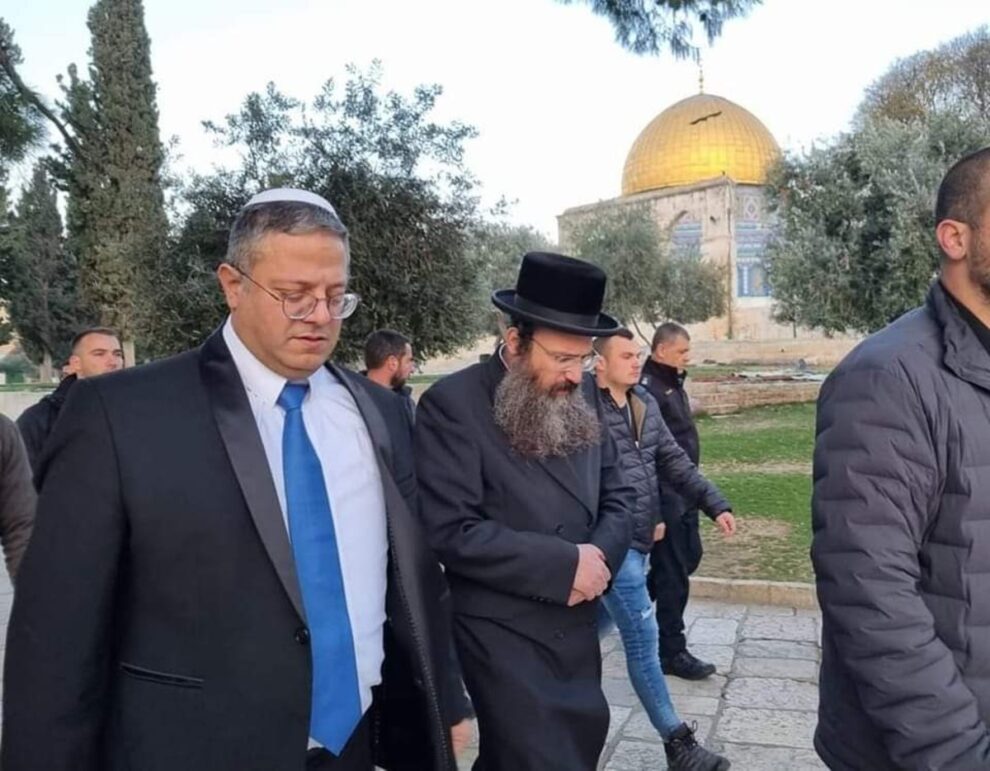 Saudi Arabia and the United Arab Emirates were among nations to condemn a visit by Israel’s extreme-right new national security minister on Tuesday to Jerusalem’s Al-Aqsa mosque compound.

The move by firebrand Itamar Ben-Gvir has enraged Palestinians, while the United States and Germany warned of steps which may harm the status quo.

“Our government will not surrender to the threats of Hamas,” Ben-Gvir vowed in a statement published by his spokesman, after the Palestinian militant group warned such a step was a “red line”.

Ben-Gvir’s visit comes days after he took office as national security minister, with powers over the police, giving his decision to enter the highly sensitive site considerable weight.

Al-Aqsa mosque is the third-holiest place in Islam and the most sacred site to Jews, who refer to the compound as the Temple Mount.

Under a longstanding status quo, non-Muslims can visit the site at specific times but are not allowed to pray there.

In recent years, a growing number of Jews, most of them Israeli nationalists, have covertly prayed at the compound, a development decried by Palestinians.

The UAE and Morocco, which established diplomatic ties with Israel in 2020, both spoke out against Ben-Gvir’s action.

The US ambassador to Israel, Tom Nides, said Washington “has made it clear to the Israeli government it opposes any steps that could harm the status quo in the holy sites”.

Germany’s ambassador to Israel said the status quo “has long helped maintain the fragile peace and security around the holy sites” and urged all sides to avoid actions that could raise tension.

Lying in the walled Old City of Israeli-annexed east Jerusalem, the compound is administered by Jordan’s Waqf Islamic affairs council, with Israeli forces operating there and controlling access.

After his visit, Ben-Gvir vowed to “maintain the freedom of movement for Muslims and Christians, but Jews will also go up to the mount, and those who make threats must be dealt with — with an iron hand”.

The politician has lobbied to allow Jewish prayer in the compound, a move opposed by mainstream rabbinical authorities.

“What will people say when they see a minister, an observant Jew, who flouts the position of the rabbinate?” he asked.

Saudi Arabia, home to the holiest sites in Islam, condemned the “provocative practices” of Ben-Gvir.

Israel’s arch-foe Iran called the visit a “violation of international regulations and an insult to the values and sanctities of the Muslims.”

Hassan Nasrallah, head of Iran-backed Lebanese militant group Hezbollah, said Israel’s “attack” on the Jerusalem holy site “will not only blow up the situation inside Palestine, but may blow up the entire region”.

While Ben-Gvir has visited the compound numerous times since entering parliament in April 2021, his presence as a top minister is highly significant.

A controversial visit in 2000 by then opposition leader Ariel Sharon was one of the main triggers for the second Palestinian intifada, or uprising, which lasted until 2005.

Basem Naim, a senior Hamas official, last week warned such a step would be “a big red line and it will lead to an explosion”.

On Tuesday, Hamas spokesman Hazem Qassem deemed it a “crime” and vowed the mosque compound “will remain Palestinian, Arab, Islamic”.

Hamas rules the Gaza Strip. In May 2021 an 11-day war broke out between Palestinian militants based in the territory and Israel, after violence at Al-Aqsa mosque.

The foreign ministry of Egypt — which serves as a mediator in Gaza — warned “of the negative consequences of such actions on security and stability” in the Palestinian territories and the wider region.

For years seen as a fringe figure, Jewish Power leader Ben-Gvir entered mainstream politics with the backing of Prime Minister Benjamin Netanyahu, whose office on Tuesday said Netanyahu is “committed to strictly maintaining the status quo, without changes” at the holy site.

Ben-Gvir has advocated for Arab-Israelis deemed disloyal to the state to be expelled and for the annexation of the occupied West Bank.

Until a few years ago, he had a portrait in his living room of Baruch Goldstein, who massacred 29 Palestinian worshippers at a Hebron mosque in 1994.

He launched his ministerial career on December 29, as part of what analysts call Israel’s most right-wing government in history.