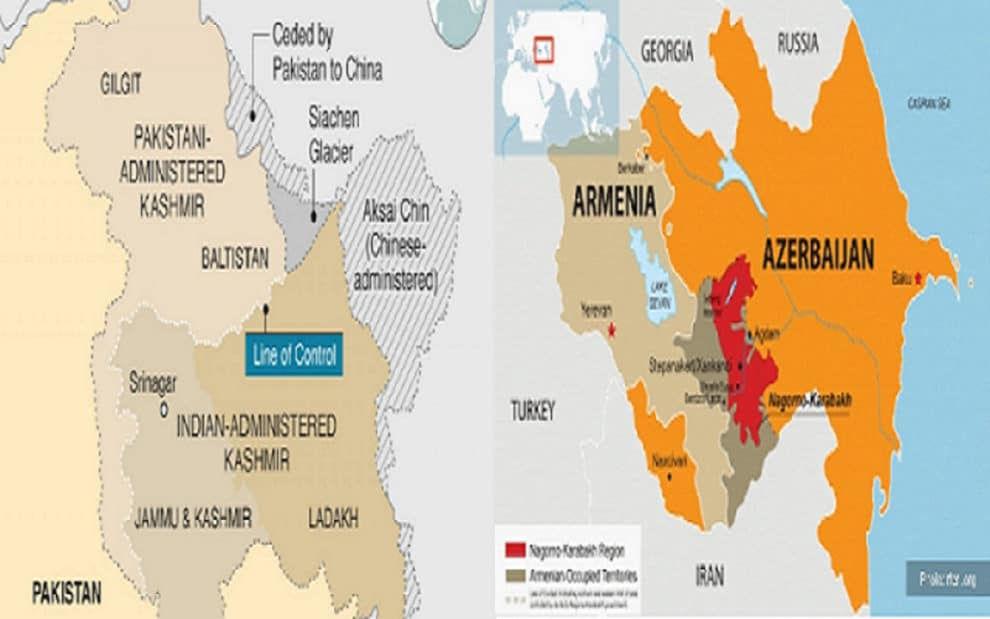 Pakistan’s position of supporting Azerbaijan’s territorial integrity has come under criticism by some in India who claim that it’s hypocritical for Islamabad to endorse the Kashmir’s / Kashmiris right to self-determination while denying the same to the majority Armenian inhabitants of Occupied Nagorno-Karabakh, but these two conflicts are actually very different from one another so such a comparison amounts to nothing more than a misleading attempt to attack the South Asian state’s international reputation even though Pakistan proudly supports the primacy of international law in both instances.

Pakistan’s extremely vocal support of Azerbaijan’s counteroffensive against Armenian forces in Occupied Nagorno-Karabakh caught many casual observers by surprise who don’t understand the South Asian state’s interest in this conflict. The uninformed among them who speculate about its motives tend to attribute them solely to its solidarity with Muslim-majority countries. Even worse, some in India have tried to weaponize this development for the purpose of attacking their rival’s international reputation by criticizing it on the grounds of supposedly being hypocritical for endorsing the Kashmiris’ right to self-determination in Indian-Occupied Kashmir (IOK) while denying the same to the majority Armenian inhabitants of Occupied Nagorno-Karabakh (ONK). This infowar attempt exploits the general public’s unawareness of Pakistan’s principled support for international law in both instances, ergo the reason for this analysis in order to clarify matters.

Nagorno-Karabakh and Kashmir are actually two very different conflicts even though they both have complicated histories that won’t be discussed at length in this piece in order to keep it focused on the primary purpose of debunking some Indians’ latest infowar attack against Pakistan. Only their modern-day history will be referenced since that’s the starting point from which each conflict most recently developed. Nagorno-Karabakh is a majority Armenian region of Azerbaijan while Kashmir is a majority Muslim one split between Pakistan and India. The first conflict broke out in the twilight years of the Soviet era after some of the majority Armenian locals agitated for their autonomous region’s administrative transfer from Azerbaijan to Armenia, while the second occurred in the aftermath of both South Asian states’ independence from the UK after the Hindu leader of the princely state of Kashmir opted to join India against the will of his majority Muslim people.

Dig Deeper For The Differences

On the surface, there doesn’t seem to be any difference between the two. The seemingly most obvious solution in both cases is to simply hold a UN-organized referendum on self-determination in order to determine their final political status in accordance with the democratic will of the majority of their populations. Unfortunately, that’s not so simple in either case. The entire international community, including Armenia incidentally enough, recognizes Nagorno-Karabakh as part of Azerbaijan. The UNSC even passed several resolutions demanding the withdrawal of Armenian forces from the occupied territories. No plebiscite can take place until the occupying army leaves and refugees, especially the ethnic Azeri ones who fled ethnic cleansing there, are allowed to return. As for Kashmir, the UNSC demanded “the democratic method of a free and impartial plebiscite” per UNSC Res. 47 but India — just like Armenia — refuses to abide by international law to this day.

The Importance Of International Law

The primary difference between Nagorno-Karabakh and Kashmir is that only the second is recognized by the UNSC as an internationally disputed territory while the first is universally acknowledged as the territory of Azerbaijan. One can argue over whether or not the UNSC has the moral authority make such a determination but this fact still can’t be denied. Contemporary international law was promulgated precisely to regulate disputes of such a nature by granting legal authority to a select group of countries (WWII’s five main victors) to help manage problems of this sort, ideally in as peaceful of a way as possible but nevertheless allowing countries the right to defend themselves per Article 51 of the UN Charter if that fails. Azerbaijan has that right as recognized under international law while India lacks it. The difference between the two might be difficult for some readers to understand so a cursory review of history must now follow.

The Hindu leader of what was then the princely state of Kashmir unilaterally asked India to militarily occupy his polity during an undeclared civil war that was prompted by the ethnic cleansing of his majority Muslim people by members of the Hindu minority. The context of that little-known conflict (which was overshadowed by the international one between India and Pakistan that followed shortly thereafter) is that all princely states had the choice of joining either newly independent South Asian country (usually on a confessional basis in accordance with the two-nation theory) or becoming independent. It’s important to note that not only did the Maharaja’s contentious decision occur in the midst of religious strife which denied his people the right to democratically determine their future, but it also sparked one of the bloodiest conflicts since the end of World War II, hence why the UNSC recognized the territory as internationally disputed.

The situation with Nagorno-Karabakh is altogether different. Stalin, with his experience as the People’s Commissar of Nationalities, included majority Armenian Nagorno-Karabakh as an autonomous region within the Azerbaijan Soviet Socialist Republic as the best way to resolve the prior war between Baku and Yerevan over this territory (which raged from the end of WWI until their dual incorporation into the USSR). Its people lived in peace until Gorbachev’s glasnost led to an explosion of nationalism within the country, after which some Armenian separatists agitated for their region’s incorporation into the Armenian Soviet Socialist Republic and then outright independence. There’s an international standard that formerly internal administrative borders not be changed upon the unit’s independence, let alone by force, yet Armenia invaded Nagorno-Karabakh to achieve just that which is why the UNSC regards Armenia as an aggressor and Nagorno-Karabakh as Azerbaijani.

Sincerity, Transparency, And Consistency Are Key

Those who support the Armenian and Indian positions on these issues have every right to do so but must acknowledge that they violate international law. They should therefore condemn international law, the UN, the UNSC, and each of its five permanent members in the interests of sincerity, transparency, and consistency like the author suggested in his recent analysis on this topic in order to prompt a long-overdue discussion about each of those four’s imperfections. Alas, those two governments are reluctant to do so because they understand the normative importance of at least appearing to selectively abide by international law and all that entails, especially Armenia which is much weaker than India and can’t afford to be portrayed as a pariah state. Nevertheless, their supporters can say what those states can’t, but therein lies the moral quandary since denying the legitimacy of international law as determined by the UNSC’s interpretation of the UN Charter (no matter how imperfect) opens up a whole can of worms regarding their positions towards other conflicts.

The Palestinian, Serbian, And Syrian Precedents

Three popular examples that will resonate with members of the Alt-Media Community relate to Palestine, Serbia, and Syria. If those who support all those countries’ territorial integrity against “Israeli” settlements, in the NATO-occupied Province of Kosovo & Metohija, and in the US-occupied Kurdish-inhabited trans-Euphrates region respectively as enshrined by international law also curiously condemn international law with respect to Nagorno-Karabakh and Kashmir then they must account for this double standard. There’s no problem with having different standards since the world is too complex for imperfectly promulgated universal ones, but an attempt (however unconvincing and circuitous) must be made to articulate this if one wants to maintain sincerity, transparency, and consistency otherwise they risk coming off as an actual propagandist. If they don’t do this, then they can’t rely on international law to support their stance on those three earlier cited issues.

Returning back to the two conflicts in question and in particular Pakistan’s position towards them, it’s now clear to see that Islamabad stands in support of international law in both cases. The final political status of Nagorno-Karabakh can’t be determined until the removal of the Armenian occupying forces per UNSC Resolutions just like Kashmir’s can’t be decided until India allows its people their UNSC-endowed right to a plebiscite on the same. Armenia and India are therefore violating international law in very similar ways albeit concerning vastly different conflicts, which might also explain why they and their supporters are in solidarity with one another. Armenian Prime Minister Pashinyan even declared at the UNGA last year that he “fully defends” India’s position on Kashmir, which isn’t surprising since international lawbreakers tend to stick together. By contrast, Pakistan supports international law, be it in Nagorno-Karabakh or Kashmir, which makes it a more responsible actor.

India riled after big brands back Kashmir on social media

Azerbaijan won the war against Armenia but reduced its sovereignty

Armenia vs Azerbaijan: Who won the Nagorno-Karabakh war?