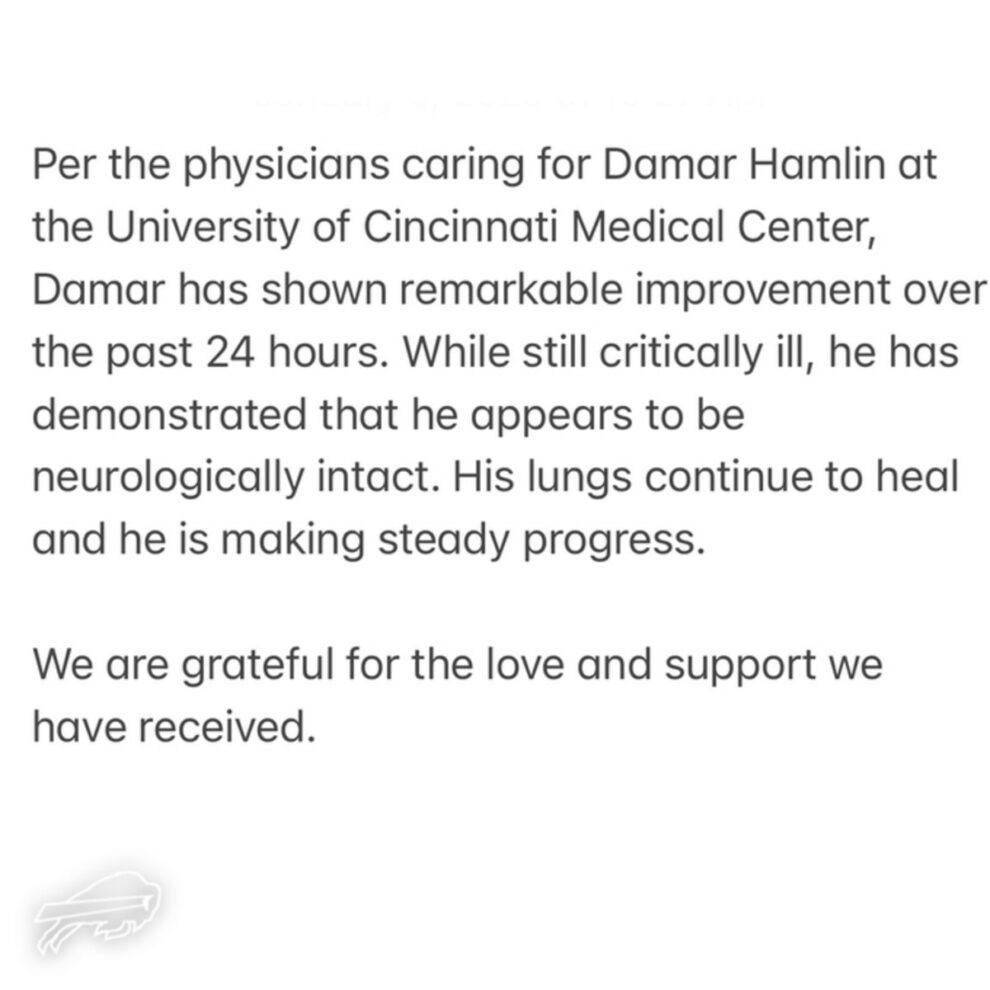 Buffalo Bills safety Damar Hamlin has shown “remarkable improvement” and is awake and communicating, three days after suffering cardiac arrest during an NFL game, the team and doctors said Thursday.

“It’s not only that the lights are on, but we know that he’s home,” doctor Timothy Pritts of the University of Cincinnati Medical Center said in a video news conference.

“It appears that all cylinders are firing within his brain.”

Hamlin remains in critical condition on a ventilator and is unable to speak, but he has been able to communicate in writing, Pritts said.

When the 24-year-old player first woke up, he asked whether the Bills won Monday’s game against the Bengals in Cincinnati — a contest that was called off after Hamlin’s terrifying collapse and subsequent efforts to revive him on the field.

“The answer is yes, Damar, you won the game of life,” Pritts said.

“As teammates, you love hearing that response, that the first thing on his mind wasn’t ‘poor me,’ it was ‘how are my teammates doing, did we win this game?’” Allen said.

“For Damar to go through that and come out the other side and still think about his teammates …. but that’s Damar, that’s who he is.”

Allen and McDermott said Bills players and staff — and those from teams around the league — were still processing the events of Monday night, which unfolded before a television audience of millions.

“It’s been a long and difficult road for the last three days,” Knight said, adding that Hamlin “has made a pretty remarkable improvement.”

He said further testing would be necessary, when Hamlin is able, to determine what caused the cardiac arrest.

At the moment, both doctors said, the main focus is on weaning Hamlin from the ventilator.

“We’re focused on the right-now,” Knight said. “He still has a ways to go in terms of liberation from the ventilator.

“It’s entirely too early to speculate about the future,” Knight added, in answer to numerous questions from reporters about the long-term prognosis for Hamlin.

However, he did say that the “best case” scenario would be a return to “who he was before this happened.”

Most of the Bills players and staff have been waiting anxiously back in Buffalo for news on Hamlin’s progress.

“I’m just extremely grateful,” McDermott said of the outpouring of support from other teams, fans, and the league, noting especially the reaction of Bengals coach Zac Taylor during the crisis.

Hamlin, a defensive back, collapsed after taking a hard hit in the chest while tackling Bengals receiver Tee Higgins during the first quarter of the nationally televised game in Cincinnati.

Medical staff who found he didn’t have a pulse restored Hamlin’s heartbeat on the field using manual CPR and defibrillators, and he was hospitalized in critical condition.

Players and personnel from both teams were clearly stunned, with some crying and praying as doctors treated him.

As of Thursday afternoon, it was not yet clear if the NFL would attempt to conclude the game, which had implications for playoff seeding, at a later date.

The Bills are preparing to host the New England Patriots on Sunday in their final regular-season game.

Allen acknowledged that getting back to focusing on football wasn’t easy, but words from Hamlin’s father, Mario, and the encouraging news of their teammate’s progress made it easier.

“I think putting the helmet back on today was a good thing for our team, just to go through that process,” Allen said.

“But I’d be lying to you if I didn’t say some people are going to be changed forever after being on the field and witnessing that and feeling those emotions.

“I think the fact that we just keep hearing good news about Damar, it just keeps pushing us forward.”