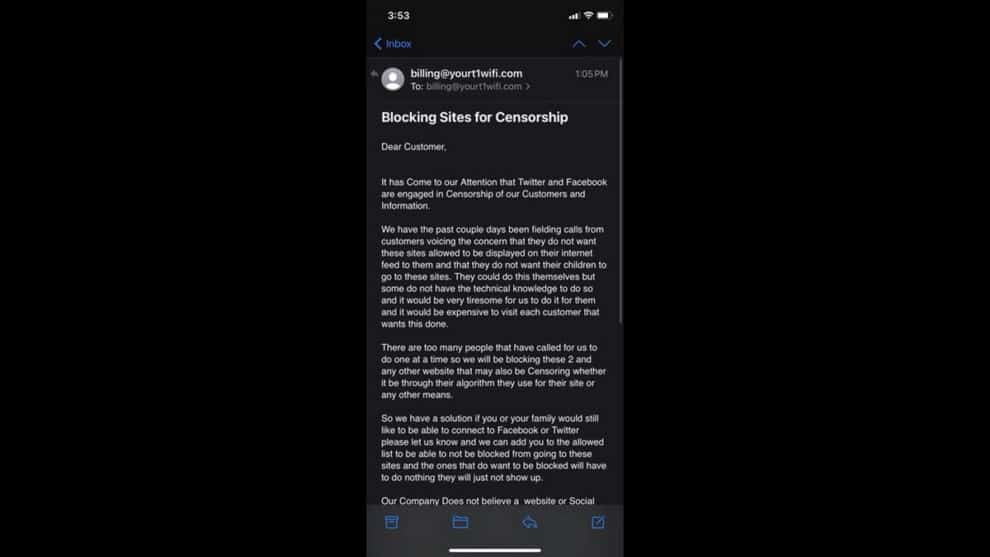 A North Idaho internet service provider says it is blocking Facebook and Twitter. The ‘Your T1 WIFI’ confirms that it is restricting access to social media giants from its WIFI service for some customers due to censorship claims.

Your T1 WIFI provides its internet service to customers in North Idaho and the Spokane area.

The step to block social media sites comes after President Trump was barred due to “inciting violence” from Twitter and Facebook.

Speaking with KHQ YourT1Wifi owner Bret Fink says many of his customers aren’t tech-savvy so he is actually helping them by blocking their access to Facebook and Twitter. Owner says, he heard from many customers saying that Facebook and Twitter propagate misinformation and are wrongly censoring the President.

“It has come to our attention that Twitter and Facebook are engaged in the censorship of our customers and information,” an email to customers reads.

In the email, the company said the majority of their customers were asking them to block Facebook and Twitter at one time, so the sites would be blocked to all customers except for those who reached out to the company and requested access.

The internet service provider said the change would go into effect on January 13, 2021.

Fink says his company has sent out a clarification email as many initially thought he is the one who is doing the censorship.

As you know we sent out a email yesterday that was supposed to say if you want to be blocked from Twitter or Facebook please email, text or call us.

This is for the customers that have expressed they want it blocked to make it easier for us to do it for them, if you don’t want to be added to the block list then you don’t have to do anything as you wont be added to that list instead you will continue with no blocks just like always.

We believe that everyone deserves to make a choice and our customers that have called and emailed have expressed to be blocked (not All of them just a lot of them) so we sent out a email to everyone asking if they wanted to be blocked or unblocked. Guess we should have been more clear in the email if you don’t reply back or contact us you Will Still be able to connect to these sites.

We do not take any position other than we don’t condone what any of these companies are doing.

As a lot customers have stated. They do not want their children or their family connecting to these sites and do not have the know how to stop them from appearing so they asked us to do it for them. As IT guys Know its not easy programing a firewall for the people that don’t deal with it on a day to day basis and if they tried they can basically shut their internet off complete causing even more issues and websites they cannot go to. That is why we elected to do a Block list for those customers and send a email out asking who all wants to be added to it so we can get it done in a short time and be done with it.

This in no way is a total shut down from seeing these sites and if you read it as that, that is far from the truth, there is to many customers that use those sites for work and business and family just the ones asking will be blocked.