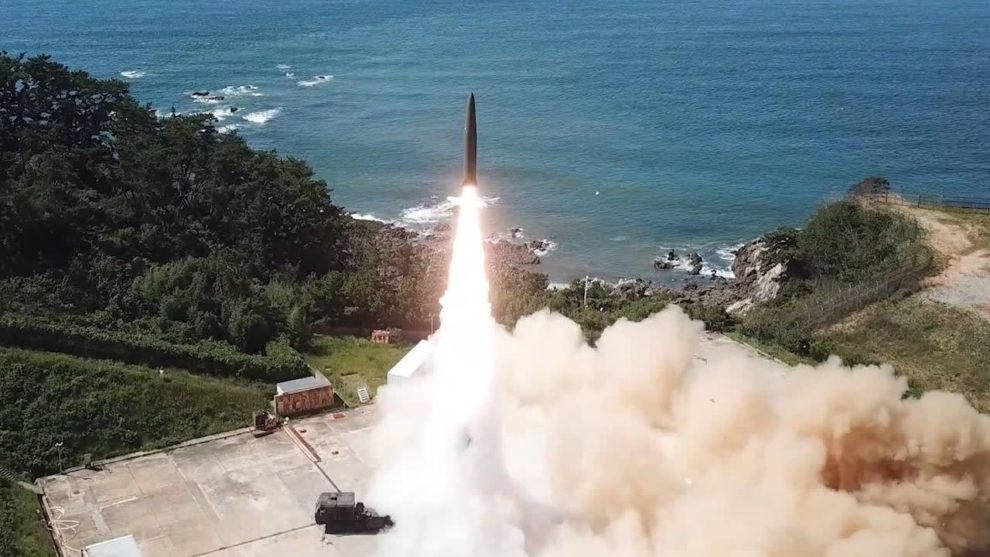 The launch comes at the end of a year that has seen Pyongyang conduct an unprecedented number of tests, including last month’s launch of its most advanced intercontinental ballistic missile yet, with a range capable of hitting the US mainland.

Earlier this week, Pyongyang also claimed to have developed new capabilities to take images from space.

“Our military spotted two short-range ballistic missiles launched by North Korea into the East Sea from the Sunan area of Pyongyang at around 16:32 (0732 GMT) today,” South Korea’s Joint Chiefs of Staff said, referring to the body of water also known as the Sea of Japan.

The two missiles flew around 250 kilometres (155 miles) and 350 kilometres (217 miles) respectively, before splashing down into the East Sea, it added.

The two countries held a joint air drill on Tuesday, and deployed a US B-52H strategic bomber to the Korean peninsula, according to the South Korean Joint Chiefs of Staff.

The long-range heavy bomber was part of an exercise that included the United States and South Korea’s most advanced jets — including the F-22 and the F-35 stealth fighters.

Experts say North Korea is particularly sensitive about US-South Korean joint air drills as its air force is one of the weakest links in its military, lacking high-tech jets and trained pilots.

“Today’s launch could be North Korea’s response to the US and South Korea’s joint drills that took place earlier this week” as air drills particularly infuriate the North’s leadership, Yang Moo-jin, a professor at the University of North Korean Studies, told AFP.

The Wagner group is controlled by Yevgeny Prigozhin, a businessman and a vocal critic of the Russian defence establishment’s handling of the war in Ukraine.

His mercenary-like army has been carrying out operations, ostensibly private but implicitly approved by the Kremlin, in Syria, Libya, Sudan, the Central African Republic and other countries in Africa.

Seoul also condemned Pyongyang’s alleged dealing with Wagner, emphasising that Pyongyang is barred from engaging in any military transactions under the United Nations Security Council resolution.

In a statement, the North Korean foreign ministry denied conducting arms transactions with Russia, saying the story was “cooked up by some dishonest forces for different purposes”.

Despite heavy international sanctions over its weapons programmes, Pyongyang has built up an arsenal of intercontinental ballistic missiles (ICBMs).

It is not always easy to read North Korea’s political motives when it conducts a weapons test as “Pyongyang also launches missile tests for technical purposes,” Cheong Seong-chang of the Center for North Korea Studies at the Sejong Institute told AFP.

Last week, North Korea tested a “high-thrust solid-fuel motor”, with state media describing it as an important test “for the development of another new-type strategic weapon system”.

His powerful sister also insisted earlier this week that the North had developed advanced technologies to take images from space using a spy satellite.

Kim has said that he wants North Korea to have the world’s most powerful nuclear force, and declared his country an “irreversible” nuclear state.

The wishlist he revealed last year included solid-fuel ICBMs that could be launched from land or submarines.

While many North Koreans lack access to food, “Pyongyang is expanding its nuclear threats, funded by other destabilizing actions including cyberhacking and selling munitions for Russia’s war in Ukraine,” said Leif-Eric Easley, a professor at Ewha University in Seoul.