Google released the latest Android 11 update last month, and immediately it rolled it out to its eligible Pixel devices. Some other Android OEMs, including OnePlus, Xiaomi, Oppo, and Realme, also joined the search engine giant to push out the update, in the form of custom skin, to a few of their devices on the same day. Well, according to the latest report, Samsung has also joined the OEMs, rolling out its new One UI 3.0 (Android 11) beta update to the Galaxy S20 series. Speaking of the update, it brings a host of amazing features, including a double-tap gesture and many more. However, with the look of things, it seems the new update has now removed the camera filters, including the face smoothing feature, from the Galaxy devices.

No Face Smoothing after One UI 3.0 update: Here’s Why

Not long ago, Google was able to release an Android 11 document. Speaking of the document, it specifies the requirements that Android OEMs have to follow. They’ll need to adhere to the guidelines for their devices to be compatible with the new Android 11 operation system. Furthermore, according to the document, Android OEMs are now restricted from using any camera algorithms to alter facial appearance. Here’s a brief of what the newly released document says regarding the changes below:

As seen above, it means users cannot alter the camera filters, including face skin smoothing, while capturing images.

As mentioned earlier, Samsung has already rolled out its One UI 3.0 (Android 11) update to the Galaxy S20 devices. And according to the latest report, it seems the company has started adhering to Google’s new guideline, which states that camera filters, including face smoothing, shouldn’t be altered anymore. A Redditor, with the username HelloThere0021, recently posted the report on the social media Reddit. The user posted two images, with one captured with the Galaxy S10+ running One UI 2.5 and Galaxy S20, running the new One UI 3.0 (Android 11). You can check below for the screenshot of what the user said regarding the new changes. 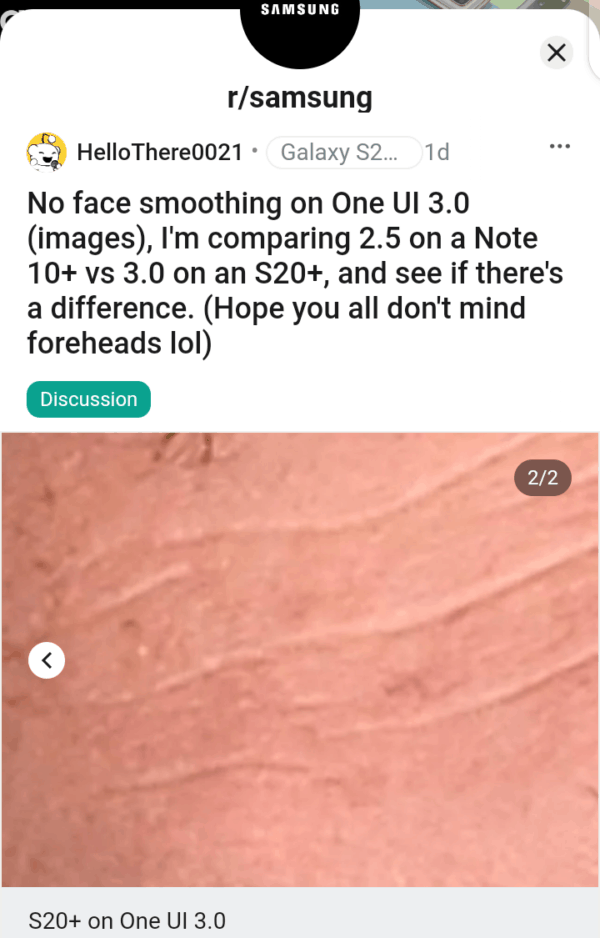 How Users Feel About the New Changes

According to some users, the new changes introduced by Samsung’s One UI 3.0 (Android 11) update, as a result of Google’s guidelines, is okay. However, some other users do not seem to be happy with it.

Irrespective of what you think about the new changes, the fact remains that Google has already made its point. Well, it’s worth noting that you can still alter the facial appearance, including face smoothening, on your images. However, that’ll only be possible during the post-processing of the captured image.

Furthermore, we’re still unsure of other OEMs that have joined Samsung to implement the rules for their custom skin update. We’ll make some research on that and keep you updated regarding our findings as soon as possible.