In case you don’t know, Google feed is the personalized experience that learns from a user’s behavior and likes, to deliver timely, and relevant results. So far, a few OEMs, including Nokia, Motorola, and Huawei, have incorporated the feature into their in-house launchers. However, in the case of OnePlus devices, they come with the company’s Shelf, which is usually located to the left of the home screen. The feature offers users a quick overview of the date, time, weather information, and many more. However, it’s not as intuitive as the Google Feed. Recently, the company updated the OnePlus launcher, introducing new support for Google Feed / Discover, but the feature doesn’t work on OnePlus 7 / 7T series and older devices. It only works on the OnePlus 8 series.

Now, owners of OnePlus 7/7T devices have taken online to express their disappointment in the company for its decision to lock them out of the new Google Feed update.

According to the latest reports, OnePlus 7 / 7T and older devices users have taken to various social media platforms, to complain about getting restricted from using the new Google Feed update.

Let’s have a quick look at some of the OnePlus 7 / 7T users’ complaints so far, about the new Google Feed feature below:

According to a user @Kaifu on the community forum, he asked whether or not the new Google feed update will come to the OnePlus7/7T series. Here’s what the user posted a few days ago:

“Hey OnePlus, can you please confirm if the Google feed, which is present in the OnePlus 8 series if you swipe left from the home screen, will come to the OnePlus 7t or not? I’ll really appreciate it if you could just answer this! (Yes or No will do).”

According to another user @Shantanu_Sarkar, he wants to know whether or not the OnePlus7/7T series will get the Google feed anytime soon. Here’s a screenshot of what he posted below: 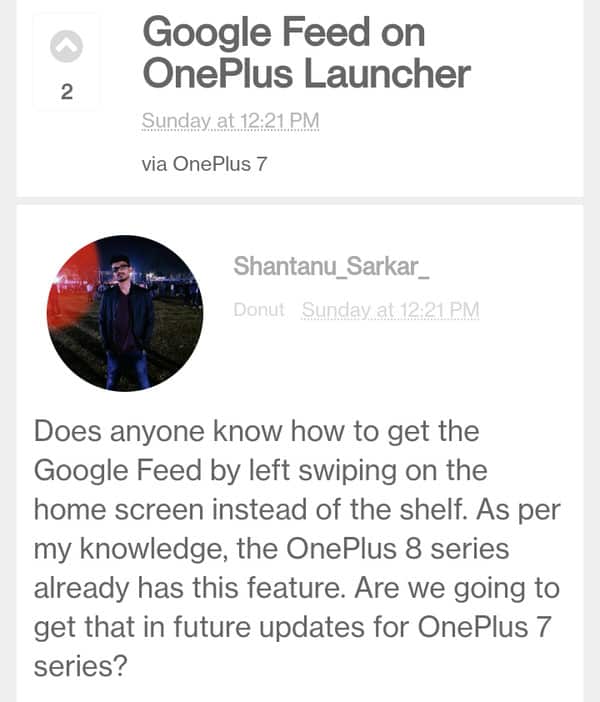 Although many OnePlus7/7T users want the new Google Feed update on their device, some still prefer the company’s Shelf.

According to a Twitter user @Norbwayy, he said: “Nop, I only use OP because of the OP shelf!” 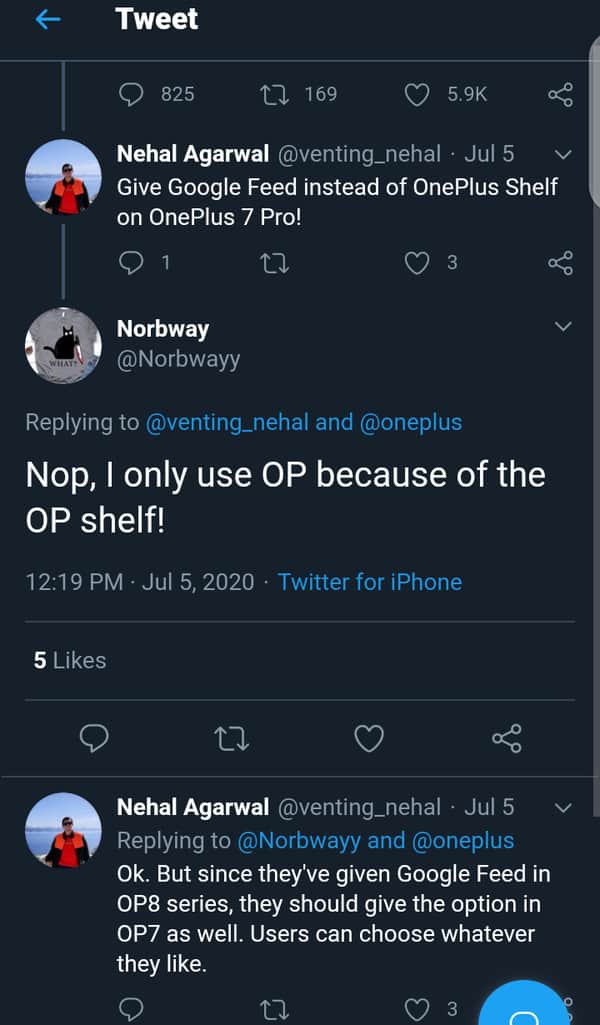 Any Response Yet From The Company?

So far, OnePlus has been able to respond to some of the complaints by OnePlus7 / 7T series users concerning Google Feed. According to the company, users who want the new feature on their devices should send feedback using the OnePlus Community App.

Here’s what the company’s support posted while responding to a complaint on Twitter.

“Thank you for reaching out to us. We value your feedback and suggestions. We request you to submit the feedback / Suggestion using our Community App so that our team can check and work on it.”

For now, it’s still unclear whether OnePlus will grant its users’ wishes and roll the new feature to them. So, we’ll have to wait for the company to decide on that. However, it’s worth knowing that the OnePlus 7T T-mobile variant already has the Google Discover on its in-house launcher.