Only time will tell whether we will ever see a public iOS 14 jailbreak. But there is no denying that a bunch of developers are working hard to break into Apple’s walled garden. The Cupertino company has been testing both the developer beta and public beta versions of iOS 14, fixing bugs, optimizing the experience, and adding new features. Meanwhile, Pangu team has demonstrated their iOS 14 jailbreak at the MOSEC 2020 mobile security conference.

Apple announced the iOS 14 alongside the new macOS, iPadOS, and watchOS at its WWDC event in June. The new software versions will likely roll out in the next couple of months to the public.

Min Zheng aka Spark of Pangu team took to Twitter to announce that they have successfully achieved jailbreak of iOS 14. The accompanying image confirms that they used an iPhone 11 Pro running iOS 14 beta software for jailbreaking. 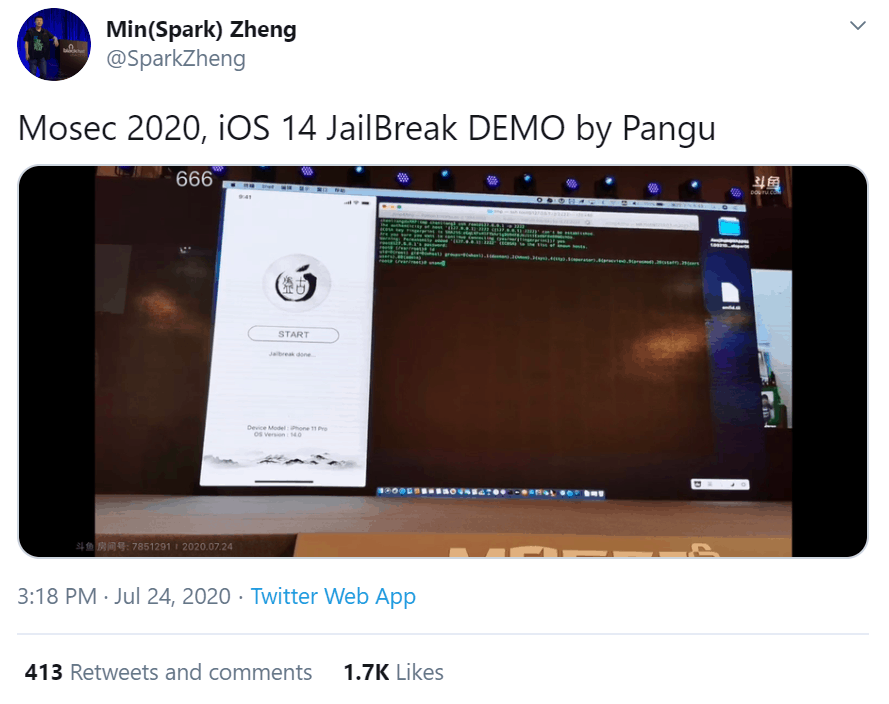 Min Zheng didn’t reveal which exploit they used to jailbreak the software. Neither did he mention whether they would release a jailbreak to the public. But it does suggest that the iOS 14 is jailbreakable despite Apple’s best attempts to restrict jailbreaking. Pangu has not released a single jailbreak tool to the public since iOS 9.

We shouldn’t get our hopes too high, but there is still a real possibility of an iOS 14 jailbreak arriving to the public later this year.

Will it be Checkra1n vs Pangu team?

A few weeks ago, team Checkra1n demonstrated their iOS 14 jailbreak running Cydia on iPhone X. Dany Lisiansky, a member of the Checkra1n team, shared a screenshot of an iPhone running iOS 14 beta 1 with the Checkra1n and Cydia apps. Dany’s tweet ended with ‘powered by #checkm8.”

Apple tends to fix most jailbreaks via a software update. But the Checkra1n jailbreak is based on hardware, preventing the tech giant from fixing it by rolling out a new software update. The Checkra1n team has said that it would work on the iPhones running chipsets as old as the A9. However, there is still no guarantee that the developers will ever put it in the public domain.

The iOS 14 will bring a redesigned Home screen. It will allow users to rearrange apps and place widgets on the home screen. The Messages app will have the @mention feature in group chats and the ability to pin important messages at the top.