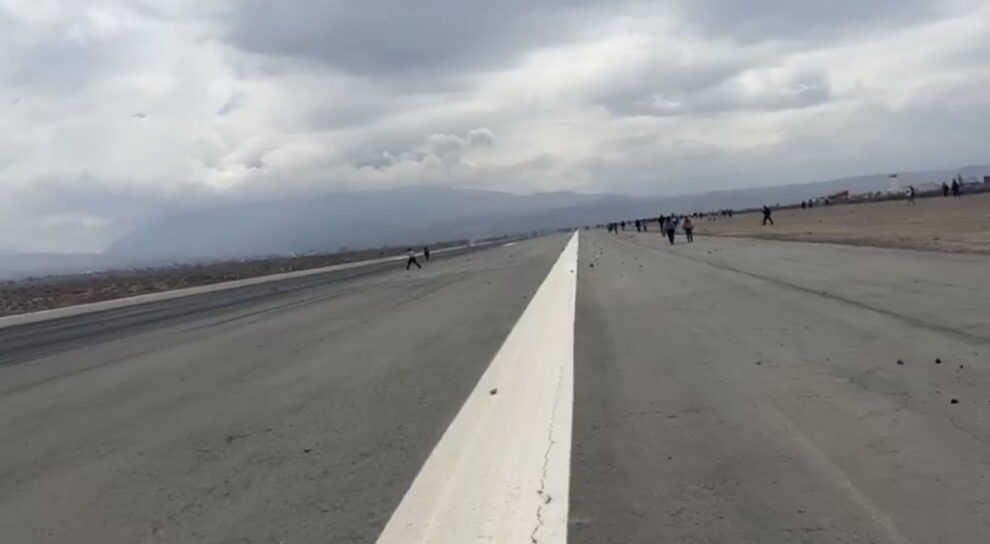 Hundreds of protesters on Monday used burning tires, wood and rocks to block the airport runway in Peru’s second-largest city, Arequipa, demonstrating against the ousting of former president Pedro Castillo.

Protesters have demanded fresh elections and the resignation of new President Dina Boluarte, following the arrest of her leftist predecessor Castillo last week after he attempted to dissolve Congress and rule by decree.

New road blocks were set up on Monday in several major cities such as Arequipa in the south, Cusco in the southeast and Libertad in the north.

It came despite Boluarte saying in her televised address that she would try “to reach an agreement” with Congress to bring forward elections from July 2026 to April 2024.

She said a bill on moving the poll forward would be submitted in the coming days, adding that she was also declaring a state of emergency in restive areas.

Boluarte, a former prosecutor who had served as Castillo’s vice president, was quickly sworn in to replace him following his impeachment and subsequent arrest last week.

On Sunday, clashes between protesters and police in the southern city of Andahuaylas left two dead and at least five injured — including a police officer — as demonstrators attempted to storm that city’s airport.

In her address, Boluarte expressed regret for the protesters’ deaths.

A police station in the Apurimac town of Huancabamba was also set on fire, RPP radio reported.

“I urge people to remain calm,” Interior Minister Cesar Cervantes told the station, as he announced the second death.

“No Peruvian’s life should be sacrificed for political interests,” Boluarte tweeted on Sunday evening before her speech, reiterating a call for “dialogue and the rejection of violence.”

The country’s right-leaning Congress convened an emergency session on Sunday afternoon to discuss the crisis, but had to be suspended after physical altercations broke out.

In images posted on social media, a man punched another man and then members shoved each other in the center of the chamber.

Some 1,000 to 2,000 people rallied in Lima on Sunday shouting, “Castillo you are not alone, the people support you” and brandishing signs accusing “Dina and Congress” of being “corrupt rats,” before police dispersed the crowd with tear gas.

Meanwhile, rural unions and organizations representing Indigenous peoples called for an “indefinite strike” beginning Tuesday in support of Castillo, himself the son of a peasant family.

They demanded the suspension of Congress, early elections and a new constitution, as well as Castillo’s immediate release, according to a statement from the Agrarian and Rural Front of Peru, which groups about a dozen organizations.

With his background as a rural teacher and union leader, and with little contact with the nation’s elites, Castillo has always drawn his strongest support from Andean regions, while struggling to find backing in coastal Lima.

The ousted president was arrested on Wednesday while heading to the Mexican embassy to seek asylum, and prosecutors have charged him with rebellion and conspiracy.

Peru is now on its sixth president since 2016.

Castillo’s 17-month rule was overshadowed by six investigations against him and his family, mass protests demanding his removal, and a power struggle with the opposition-backed Congress.