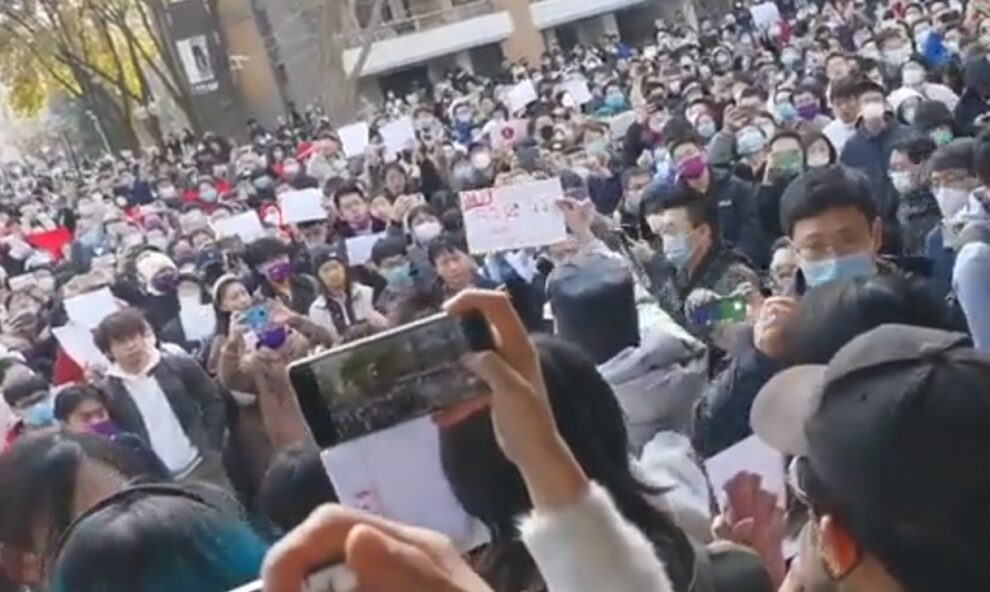 Hundreds of people took to the streets in Beijing and Shanghai on Sunday to protest against China’s zero-Covid policy in a rare outpouring of public anger against the state.

A deadly fire on Thursday in Urumqi, the capital of northwest China’s Xinjiang region, has become a fresh catalyst for public anger, with many blaming lengthy Covid lockdowns for hampering rescue efforts. Authorities deny the claims.

Hundreds rallied at Beijing’s elite Tsinghua University to protest against lockdowns on Sunday, one witness who wished to remain anonymous told AFP.

“At 11:30am students started holding up signs at the entrance of the canteen, then more and more people joined. Now there are 200 to 300 people,” they said.

Participants sang the national anthem and “the Internationale” — a standard of the international communist movement — and chanted “freedom will prevail” and “no to lockdowns, we want freedom”, they said.

They described students holding up blank pieces of paper, a symbolic protest against censorship.

And in Shanghai on Sunday afternoon, hundreds of people gathered in the megacity’s downtown to hold what appeared to be a silent protest, an eyewitness told AFP, near where a demonstration had erupted just hours earlier.

Crowds had gathered hours before on nearby Wulumuqi street — named for Urumqi in Mandarin — with video showing protesters chanting “Xi Jinping, step down! CCP, step down!” in a rare display of public opposition to the Chinese Communist Party’s top leadership. The video was widely shared on social media and geolocated by AFP.

A person who attended the Shanghai protests but who asked not to be identified told AFP the first rally was in full swing at 2:00am (1800 GMT), with one group mourning the 10 people killed in the Urumqi fire while another group chanted slogans.

Video taken by an eyewitness showed a large crowd shouting and holding up blank pieces of paper as they faced several lines of police.

The attendee said there were minor clashes but that overall the police were “civilised”.

“It’s shocking to know that, under today’s circumstances, there are still many brave people standing out,” they said.

Multiple witnesses said several people were taken away by the police.

Authorities were swift to curb online discussion of the protest, with related phrases scrubbed from the Twitter-like Weibo platform almost immediately after footage of the rallies emerged.

Other vigils took place overnight at universities across China, including one at Tsinghua’s neighbour Peking University, an undergraduate participant told AFP.

Speaking anonymously for fear of repercussions, he said some anti-Covid slogans had been graffitied on a wall in the university.

Some of the words echoed a banner that was hung over a Beijing bridge just before the Communist Party Congress in October.

People had started gathering from around midnight local time, but he hadn’t dared join initially.

Photos and videos he showed AFP corroborated his account.

Videos on social media also showed a mass vigil at Nanjing Institute of Communications, with people holding lights and white sheets of paper.

Hashtags relating to the protest were censored on Weibo, and video platforms Duoyin and Kuaishou were scrubbed of footage.

China reported 39,506 domestic Covid-19 cases on Sunday, a record high but small compared to caseloads in the West at the height of the pandemic.

The protests come against a backdrop of mounting public frustration over China’s zero-tolerance approach to the virus and follow sporadic rallies in other cities.

A number of high-profile cases in which emergency services have been allegedly slowed down by Covid lockdowns, leading to deaths, have catalysed public opposition.

AFP verified the video by geolocating local landmarks but was unable to specify exactly when the protests occurred.