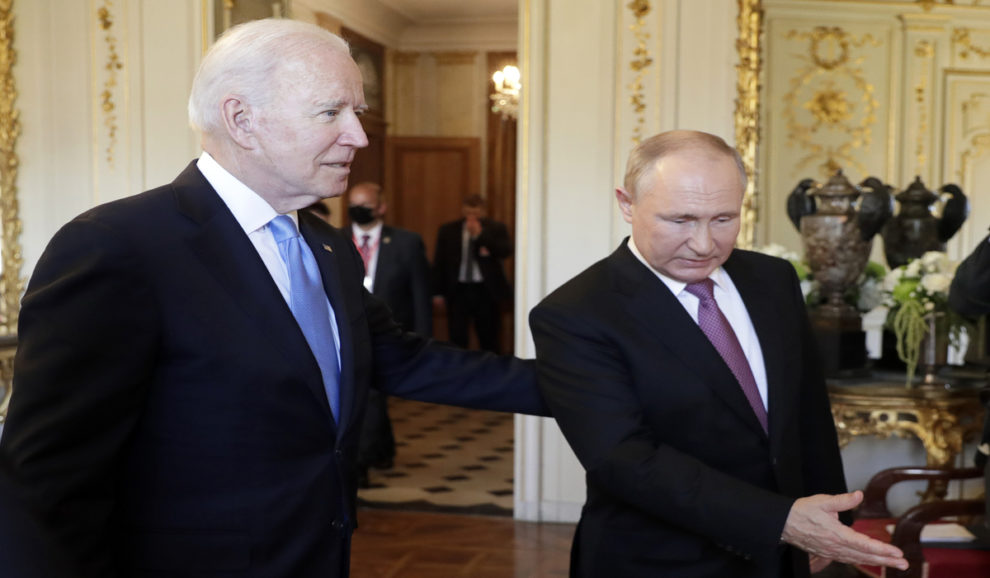 Presidents Joe Biden and Vladimir Putin met in Geneva on Wednesday, June 16. Both separately noted that the talks went well. “There’s been no hostility,” Putin said. “On the contrary, our meeting took place in a constructive spirit.” Biden meanwhile declared “the tone of the entire meeting… was good. Positive.”

The spirit may have been constructive and the tone positive, but no major step forward was made to reset the chronically strained relations between Moscow and Washington. Although the meeting went as well as could be expected, major differences remain on a range of issues, including cyberattacks and human rights.

Putin rejected accusations Russia was involved in cyberattacks against U.S. institutions and declared that the U.S. government was the main offender in this area. On human rights he said that the U.S. supports opposition groups in Russia in order to weaken it, since Washington openly sees Russia as an adversary. Putin reiterated that Moscow did not see domestic politics as up for negotiation or discussion. He also said that pro-Trump demonstrators who stormed the Capitol on Jan. 6 were merely expressing reasonable political demands, for which they now faced punitive jail terms.

For his part Biden ensured the summit would be seen as the opposite of Donald Trump’s notably cordial meeting with Putin in Helsinki three years ago. He said that he had pressed the Russian leader on a range of issues, such as human rights, and that he would continue doing so. “No President of the United States could keep faith with the American people if they did not speak out to defend our democratic values, to stand up for the universal rights and fundamental freedoms that all men and women have, in our view,” Biden said he told Putin. “That’s just part of the DNA of our country… It’s about who we are.”

On the modest plus side the two leaders agreed that their ambassadors, who were recalled amid the rising tensions, should return to their posts in the near future. In addition, the U.S. and Russia would start “consultations” on cyber-related issues. As for the overall tone of the meeting, the Russian president paraphrased Leo Tolstoy by saying “there is no happiness in life only glimmers of it. Cherish them.”

“I think that in this situation, there can’t be any kind of family trust,” Putin concluded. “But I think we’ve seen some glimmers.”

Media commentary around the world reflected one common theme: at least it is reassuring that there is a dialogue. “The US-Russian summit in Geneva confirmed the low expectations for the meeting,” commented the Neue Zürcher Zeitung, Switzerland’s leading daily:

There were hardly any concrete agreements, but at least the American president is no longer inviting attack from his Russian counterpart. The chorus of commentators was pretty unanimous in the run-up to the summit from Moscow to Washington: There was no significant room for concessions or a change of strategy, either on the American or on the Russian side. The expectations therefore had to be set extremely low.

These low expectations were noted by the Frankfurter Allgemeine Zeitung as well, which found it encouraging that the meeting lasted considerably longer than expected. The paper also thought it a hopeful sign that “the Russian President, who had already made the Pope and the British [sic!] Queen wait, arrived on time.”

“The summit flowed along conventional diplomatic lines:” wrote The Guardian; “a handshake, several hours of intensive talks and separate press conferences afterwards. The ghost of Helsinki was exorcised.” According to the British daily, the obvious and easy “deliverables” were achieved:

“There will also be consultations between the US state department and the Russian foreign ministry on a range of issues including the Start III nuclear treaty, due to expire in 2024, and cybersecurity.”

The Russian media, unlike their Western counterparts, emphasize that one area of agreement in Geneva concerned the implementation of the Minsk agreements. The daily Rossiyskaya Gazeta noted Putin’s statement that Biden agreed with him that the Minsk agreements should be at the heart of the settlement in Ukraine. Quoting Peter Kuznick, professor of history at American University, the paper notes the summit was an important step in the right direction for both sides. No one expected a breakthrough, he said, but the two leaders respectfully and clearly indicated their interest in finding possible areas of common interest:

Both presidents understood each other’s ‘red lines’ and marked them more clearly. Their summaries after the meeting did not contradict, but rather emphasized and complemented each other. It seems to me that Putin was speaking to the whole world, while Biden spoke more to an audience within America, with an emphasis on human rights.

Considering the current state of bilateral relations, the Geneva summit is the maximum that could be expected. All that was deemed possible, but not obligatory, did happen, Professor Fyodor Lukyanov of Moscow’s School of Economics noted.

The conversation was businesslike and informative. This means that from the insane phase we’ve had in recent years, with normal relationship replaced by sheer hysteria, we are moving into a phase of more structured rivalry… The summit only outlined a way out of the impasse. Now we have to do all the work that is normally done before the summit. Since it was not done this time, solid steps will be prepared for some future milestone.

Prior to this meeting, Washington strengthened Russophobic sentiments in countries that follow American foreign policy. The peak of Russophobia was represented by the events in the Czech Republic, Bulgaria, but also by a number of other states which adjust it`s foreign policy to Washington’s foreign policy. Bearing in mind that at the moment relations between Washington and Moscow are not friendly, under American command, that kind of states accuse Russia constantly, including for events that happened years ago.

More in the documentary:

Author’s Bio I live in Podgorica (capital of Montenegro), I am 30 years old, and I graduated history at University of Montenegro. My specialist graduate thesis was: “Foreign Policy of Russia from 1905 to 1917”. I have been doing analytics for years, writing in English and Serbian about the situation in the Balkans and Europe.  I participated in several seminars for young journalists, organized in the Balkans.