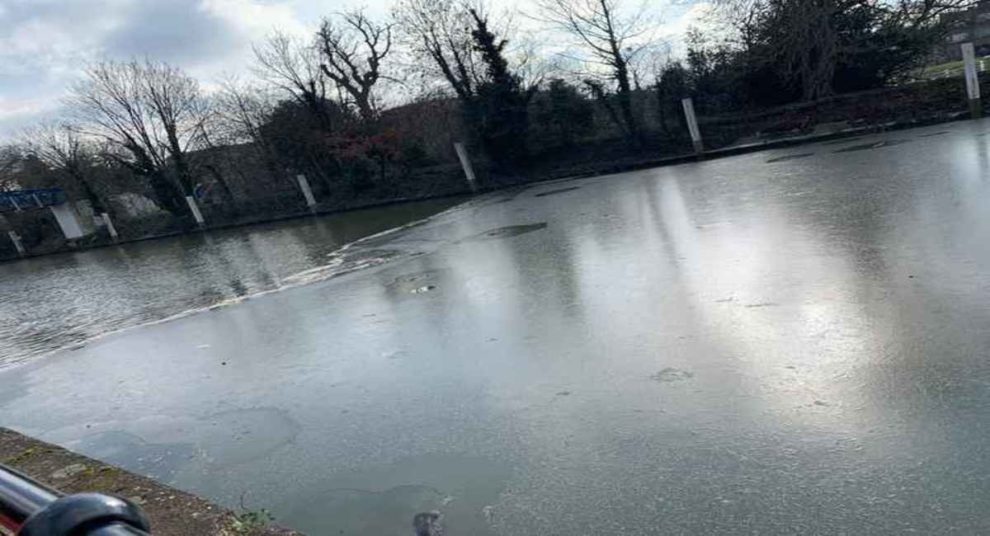 The Thames freezes over in Teddington today as Britain goes through a sub-zero cold snap. The “extreme freeze” has sent temperatures plunging with more heavy snow coming up.

Waves changed to ice in Cumbria today and the Thames froze over for the first time in 60 years as temperatures in England dropped to record lows overnight. Temperatures in London dropped to -2C as Storm Darcy left Britain in a sub-zero cold snap.

The last time the river completely froze over was in January 1963. It saw the coldest winter for more than 200 years.

Seagulls were seen on the frozen water on the River Thames in Teddington on Friday. And waves on Aldingham beach in South Cumbria changed to ice overnight to the excitement of those out for a walk amid coronavirus lockdown.

A member of the local RNLI crew photographed unusual sight of a frozen Thames yesterday at around 10 am.

A spokeswoman for the RNLI said: “It’s not often the Thames freezes over in Teddington. We might have to use the D class [inflatable] lifeboat as an icebreaker.”

“It’s quite spectacular. I’ve lived here for 13 years and I’ve not seen this part of the river freeze like this.”

In the capital and the South East, train services canceled and roads left in hazardous conditions. Meanwhile, the severe cold brought wildfires in Devon, Cornwall, and Scotland as icy situations dried out vegetation, according to area commander Bruce Farquharson from the Scottish Fire and Rescue Service.

He said: “It is counter-intuitive for almost everybody but the risk is there, the vegetation is tinder dry and it just takes the slightest spark to ignite the fire and it will burn very quickly and spread very quickly.”

The expected temperature this week

This week temperatures in the capital are predicted to remain 0C and -1C but could feel as low as -5C due to the winds.

The Met Office said Wednesday evening was the coldest February night across the UK since February 23, 1955.