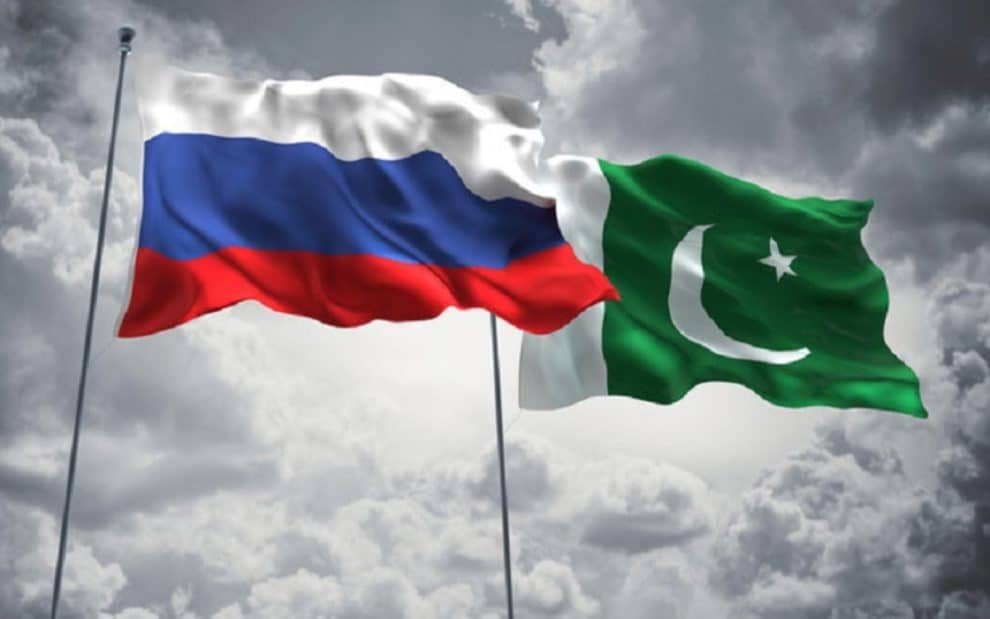 Asia is a gold mine of opportunities and choices for the major powers. The significant location of Pakistan in the region attracts major powers as well. Changes in geopolitics bring new opportunities and choices, which in turn lead regional states towards decisive shifts in their foreign policy. Russia is opening its eyes and looking to be a regional hegemon. Although Pakistan and Russia don’t have a history of good relations, the strategic realities gave birth to the current shift, which is very positive for both of them.

Pakistan-Russia: A path towards new relations

Pakistan and Russia have a past of being adversaries, but today both are welcoming the idea of building and stimulating a strategic relationship. Pakistan wants to build a better relationship with Russia to reduce dependency on the United States. Islamabad wants to prove to Washington that it has as another strategic option if any tension happens between Pakistan and United States. Washington never liked Moscow’s influence in Islamabad. There are differences between Pakistan and the United States over drone attacks. According to some analysts, American hegemony is about to end in the region and Pakistan does not want to become too close of an ally with the United States and dependent on it. In fact, the increasing relationship between India and America motivates Pakistan to look for new friends and alliances. Pakistan also likes to drive a wedge between India and Russia by improving relations with Moscow. Pakistan also has an eye of Russian military equipment supply and technology assistance that is better than China’s. Pakistan wants to gain much commercial incentive from Russia, for example, the Karachi to Lahore Pipeline, and Russia is also interested in the renovation of the Pakistan Steel Mills. According to some reports, Russia may join the CASA-1000 energy project providing electricity to Afghanistan and Pakistan.

On the other hand, today Russia is interested in Pakistan because of its strategic location being right next to Afghanistan and close to the Central Asian states. Although both the countries do not share borders but have the same geopolitical space between them, Moscow has long considered Islamabad as a troublemaker for Russia and a supporter of terrorism in the region. The Russian motivation is to convince Pakistan to be moderate and subdue Islamic radicalization and militancy in the region. Pakistan is a Muslim state which has great influence in the Muslim world and Russia also has a large Muslim population. Russia thinks that Pakistan can play a vital role for stabilizing Afghanistan. Moscow hopes, after the withdrawal of American forces, that Russia will find a strategic place in the region and then it will be able to play a better role in the Indo-Pacific region. Russia also hopes that its understanding with Pakistan will decrease terrorism in Afghanistan and the region. It is also building relations with Pakistan to counter alignment between India and United States. The Pak-Russia relationship can impede India from getting close to the United States. The Indian tendency toward Israel and the United States for advanced weapons and technology encourages Russia to look for new markets for her arms sale. In Moscow’s proposition to Islamabad, Pakistan can be a part of Russian strategy by playing a significant role in the region. On the issue of Ukraine, Russia is being isolated and has few friends in the international sphere. In the aftermath of the Ukraine issue, Russia is looking for new friends who may help her challenge the West.

Islamabad and Moscow noticed each other for the first time in 2009 when Afghanistan, Pakistan, Russia, and Tajikistan floated the idea of promoting regional security and economics. This quadrilateral idea held three meetings but did not take off due to the cancellation of Putin’s expected visit to Pakistan for the fourth meeting in 2012. President of Pakistan Asif Ali Zardari had visited Russia in 2011 and the Army Chief visited Moscow during 2012. There were reciprocal visits continued by ministers and high-level officials of both the countries. Russian Defense Minister Sergei Shoigu visited Pakistan in 2014, which was the first time that someone of his position had done so in the last 45 years. During this visit, both countries agreed on information exchange on political-military issues; cooperation for promoting international security, counterterrorism, and arms control actives; collaboration in various military fields and other areas of education, medicine, topography, hydrography, and culture; and sharing experiences in peacemaking efforts. In August 2015, Moscow agreed to provide Mi-35M helicopters to Pakistan. Pakistan wished to buy 20 Mi-35Ms over the next year and got four helicopters in 2017. In addition, both countries enhanced military relations and joint military exercises were made between the two armies under the slogan of Druzhbha (Russian word meaning friendship). Russian naval forces also participated in the Aman-17 international exercise in the Arabian Sea hosted by Pakistan in 2017. Further, both countries agreed about coordination against terrorism and drug trafficking. Russia had already cooperated in outer-space exploration and helped in launching the Pakistani telecommunication satellite Al-Badar in 2001. It also had refurbished the only Pakistani steel mill.

An agreement of $2 billion for the North-South gas pipeline was signed in October 2015, which would connect Lahore to the Karachi terminal. This agreement was signed on the first visit to Pakistan by a Russian Energy Minister. The 1100-kilometer pipeline was anticipated to be completed in 2018, but construction has yet to begin because of unexpected disagreements over the project. According to the original plan, the Russian company will complete this project and use it for 25 years. In the energy sector, both states are collaborating as well and have signed a Memorandum of Understanding in Moscow between Russia’s Gazprom International and Pakistan’s Oil and Gas Development Company Limited on July 3, 2017. The project will fulfill the energy requirements of Pakistan. This understanding was for mutual cooperation and joint ventures and use of state-of-the-art technology that would aid exploration and development in Pakistan. This is the beginning of commercial ties between these two countries.

The increasing cooperation between Pakistan and Russia should be viewed in the context of the Afghan scenario which had created challenges for Moscow. Pakistan is considered an important country for the stabilization of Afghanistan. Without the constructive involvement of Pakistan, stability there is a dream. During the last six decades, very few Pakistani leaders and officials visited Russia. Whenever whoever visited, it yielded positive results such as the Tashkent Declaration in 1966 and the agreement on the Pakistan Steel Mills in the 1970s. Pakistan has revisited her foreign policy during the 21st century and gave impotence to neglected states. When the President of Pakistan visited Russia in 2002, a joint working group on strategic stability, counterterrorism, and an inter-governmental commission was established. Regular meetings of these groups have been held since then. Russia also seems to be accommodating Pakistan. Russia condemned the Salala attack by NATO on November 26, 2011 and issued a friendly public statement, and it also supported Pakistan on its decision to stop supplies to NATO in Afghanistan through its territory at the time. Russia has supported Pakistan becoming a member of the Shanghai Cooperation Organization (SCO) and being part of this Russian security mechanism. The Shanghai Cooperation Organization is an important initiative to counter American influence and to bring peace and stability in the region. Membership in the SCO will enhance the strategic and regional importance of Pakistan.

There is a strong potential of Pak-Russia relations in steel production, communication, space technology, and the energy sector. Pakistan should embrace these choices because it has much learned from past errors and mistakes. There is common perception in Pakistan that its policy of ignoring nearer countries and aligning with distant ones cost her politically, economically, and strategically. These alliances could not become successful in achieving all the goals of Pakistan such as politically resolving the Kashmir issue and ensuring security against India. Washington has enhanced its relationship with India and is projecting it as a regional power. It did not fulfill the promise which it had made in the beginning of the relations. It also did not make Pakistan a progressive and modern society, but turned it into a radical and fragmented one. In fact, the ideal of choosing the democratic west against the authoritative east resulted in a long and consistent spell of dictatorship in Pakistan. Comparatively, India chose the other way around and has always had a stable and functional democracy in the country.

Although Pakistan and Russia are becoming close, Pakistan will never jeopardize its relations with Washington. Washington is providing military aid and financial assistance to Pakistan but is getting concerned by the Pak-Russia romance. Russia understands Indian concerns and believes that Moscow and Islamabad’s rapprochement will normalize the hostile situation between India and Pakistan. The historical background of the India-Russia relationship is very strong and Russia would never like to lose India. However, it is expected that there will be a period of much more intensive and extensive interaction between these two countries. The Pak-Russia rapprochement should not surprise the regional powers due to the current geopolitical churn in global politics. The Pak-Russia relationship may become a true strategic partnership in the future. If Russia improves strategic relations with Pakistan, it might be able to influence Pakistan to play a constructive role in Afghanistan and not act against India. This would be a regional interest as regional powers like to see stability in Afghanistan. If Russia goes ahead with defense cooperation with Pakistan, it would be to the detriment of the Indo-Russia relationship, and Pakistan is a smaller market than India for Russia. Russia may lose some major contracts which it has made with India recently. Both India and Russia have a long history of relations and India has never openly criticized Russian policies over Ukraine. Both of the countries are also members of several multilateral organizations like BRICS, RIC, and the SCO. Although India has expressed its concerns about growing cooperation between Pakistan and Russia several times, Russia believes that this rapprochement will normalize the hostile Indo-Pak attitude. It seems that Pakistan and Russia are going to forge a true strategic partnership.