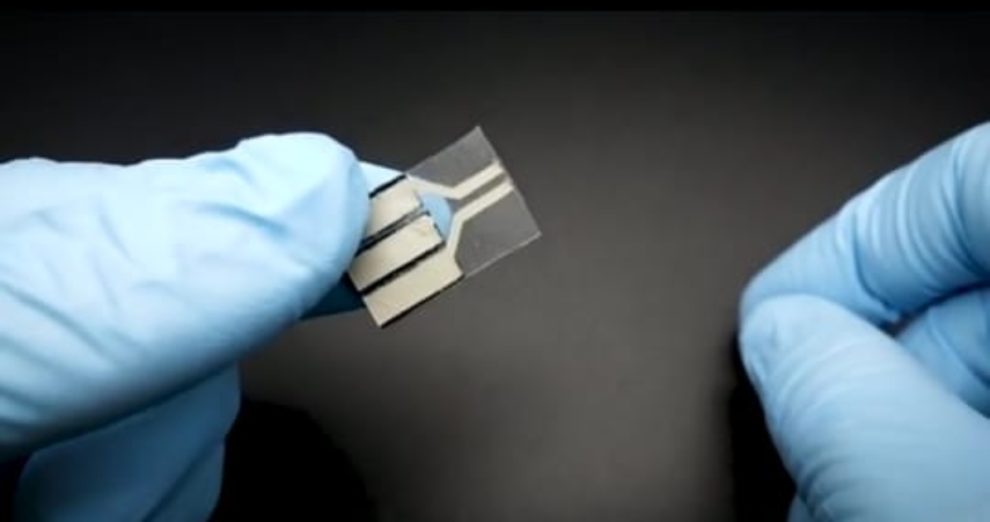 Scientists have developed the world’s most efficient on-body energy harvester, which can power devices from a person’s fingertips.

A new wearable device converts a finger’s touch into a source of power for small electronics and sensors. Engineers at the University of California, San Diego created a thin, flexible strip that can be worn on a fingertip and generate small amounts of electricity when pressed or sweated on.

This sweat-powered device is unique in that it generates power even when the wearer is sleeping or sitting still. This has the potential to be a game changer in the field of wearables because researchers have discovered how to extract energy from human sweat even when the person is not moving.

This type of device is the first of its kind, said co-first author Lu Yin, a nanoengineering Ph.D. student at the UC San Diego Jacobs School of Engineering. “Unlike other sweat-powered wearables, this one requires no exercise, no physical input from the wearer in order to be useful. This work is a step forward to making wearables more practical, convenient and accessible for the everyday person.”

A paper published in Joule on July 13 describes the new wearable energy harvester.

The device also generates extra power from light finger presses, so activities like typing, texting, playing the piano, or tapping in Morse code can all become energy sources.

“We envision that this can be used in any daily activity involving touch, things that a person would normally do anyway while at work, at home, while watching TV or eating,” said Joseph Wang, a professor of nanoengineering at the UC San Diego Jacobs School of Engineering and the study’s senior author. “The goal is that this wearable will naturally work for you and you don’t even have to think about it.”

The device gets the majority of its power from sweat produced by the fingertips, which are perspiration factories 24 hours a day, seven days a week. It’s a little-known fact that the fingertips are one of the sweatiest places on the body; each one contains over a thousand sweat glands and can produce 100 to 1000 times more sweat than most other areas.

“The reason we feel sweatier on other parts of the body is because those spots are not well ventilated,” said Yin. “By contrast, the fingertips are always exposed to air, so the sweat evaporates as it comes out. So rather than letting it evaporate, we use our device to collect this sweat, and it can generate a significant amount of energy.”

However, not any sweat-powered device can work on the fingertip. Yin explained that collecting sweat from such a small area and making it useful required some innovative materials engineering. The researchers had to design the device’s various components to be super absorbent and efficient at converting the chemicals in human sweat into electrical energy.

Yin collaborated on this project with UC San Diego nanoengineering Ph.D. students Jong-Min Moon and Juliane Sempionatto, who are also co-first authors on the study, as part of a team led by Wang, who is also the director of UC San Diego’s Center for Wearable Sensors.Wang and his team invented sweat-powered wearables eight years ago. Since then, they’ve been expanding on the technology to develop new and better ways to power wearables with sustainable sources such as the wearers’ own bodies and their surroundings.

This latest energy harvesting technology is particularly unique in that it can be used as a power source at any time and from any location. It does not have the same limitations as, say, solar cells, which can only be used in direct sunlight, or thermoelectric generators, which can only be used when there is a significant temperature difference between the device and its surroundings.

The device is a thin, flexible strip that, like a Band-Aid, can be wrapped around the fingertip. Sweat is absorbed and converted into electrical energy by a padding of carbon foam electrodes. The electrodes contain enzymes that cause chemical reactions between lactate and oxygen molecules in sweat to produce electricity.Underneath the electrodes is a chip made of a piezoelectric material, which when pressed generates additional electrical energy.

When the wearer sweats or presses on the strip, electrical energy is stored in a small capacitor and discharged to other devices as needed.

And that’s only from one fingertip. Strapping devices to the rest of the fingertips would generate ten times the energy, according to the researchers.

“By using the sweat on the fingertip–which flows out naturally regardless of where you are or what you’re doing–this technology provides a net gain in energy with no effort from the user. This is what we call a maximum energy return on investment,” said Wang.

“Compare this to a device that harvests energy as you exercise,” explained Yin. “When you are running, you are investing hundreds of joules of energy only for the device to generate millijoules of energy. In that case, your energy return on investment is very low. But with this device, your return is very high. When you are sleeping, you are putting in no work. Even with a single finger press, you are only investing about half a millijoule.”

In other experiments, the researchers linked their energy harvester to an electronic system that included a chemical sensor and a small low-power display that displayed a numerical reading of the sensor’s data. It was sufficient to power both the sensor and the display by pressing the energy harvester 10 times every 10 seconds or by simply wearing it on the fingertip for two minutes.In one experiment, the researchers connected their device to a vitamin C sensor created in the lab. They had one of the subjects take a vitamin C pill and then use the finger-powered system to determine their vitamin C level. In another experiment, the researchers demonstrated that their system could be used in conjunction with a lab-built sodium sensor to determine the sodium ion concentration in a saltwater solution.

“Our goal is to make this a practical device,” said Yin. “We want to show that this is not just another cool thing that can generate a small amount of energy and then that’s it–we can actually use the energy to power useful electronics such as sensors and displays.”

To that end, the team is working to make the device even more efficient and long-lasting. In the future, it will be combined with other types of energy harvesters to create a new generation of self-powered wearable systems.