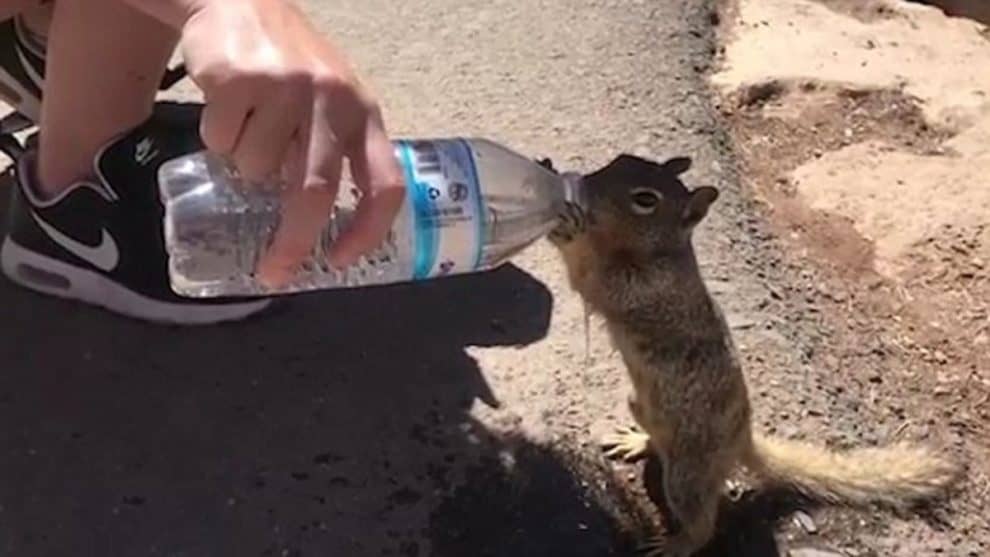 A viral video has surfaced again on social media, the video shows a squirrel asking for water. While many people claim that the video is heartwarming, it’s heart-wrenching in the least. The viral video shows the poor squirrel begging for water, it’s looking at the water bottle with such longing and thirst in its eyes.

The squirrel is seen asking for water as it attempts to reach the man’s hand holding the water bottle in the video. This viral video was filmed in unbearable sweltering heat which can be greatly discomforting for animals. Animals inhibit the earth, yet they are shunned and abused by humans. Years of development and infrastructure erected by humans has left millions of animals displaced from their homes – their natural habitats destroyed and their lives disrupted.

The desperation of the poor squirrel is apparent from its asking for water, the poor creature tries very hard to grab the man’s attention. The man is later shown feeding her water from the bottle. “How can we recognize the signs of dehydration amongst animals?” asked a Twitter user after watching the viral video. “We used to have water pots in every house in our villages so birds to animals all used to have water. We need to rise to co-exist with other species,” pointed out another user.

We should try our best to make life easier for creatures who cannot speak for themselves. During unbearable humidity and heat, we should try keeping water bowls outside for birds and other animals so they can quench their thirst. While the squirrel was seen asking for water, many other animals die due to dehydration.

Check the viral video with description “In a world when you can be anything, be kind”

In a world when you can be anything, be kind ❤ pic.twitter.com/hoqiLx7rv5

Official GoldenBeauty wrote, “If a squirrel ever begged me for water like this , he’d have a whole case of water in my back yard , with his own tree house filled with walnuts.. “ I’m your mother now”

AllShepardsAreShepards tweeted, “I have to say that the sound of children’s voices expressing feelings of true awe and love….and it’s just a baby squirrel drinking water….is something I hope they can hold onto thier whole lives. ❤ It’s a most beautiful thing.”

Glynis McCants said, “WOW. I have been thinking about how many people are suffering because of the record breaking heat, and to see this little squirrel get the water it needs from a human is PRECIOUS! Take a look.”