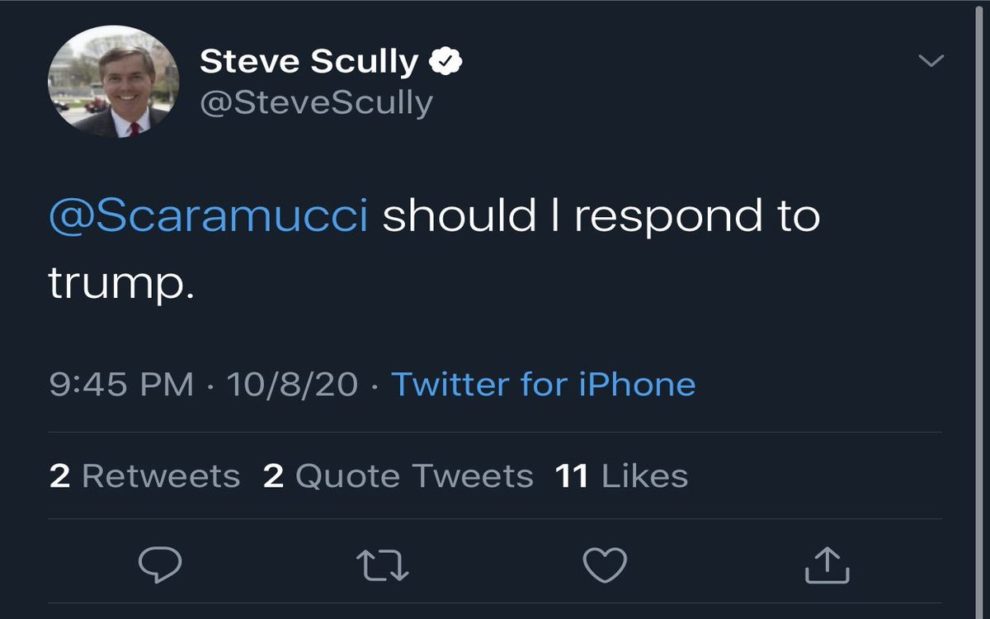 A few minutes ago, Steve Scully tweeted, “@Scaramucci should I respond to Trump.” The debate moderator suffered a considerable backlash when he tweeted asking Scaramucci “should I respond to Trump?” Scaramucci is the former White House communications director.  This followed the Commission on Presidential Debates telling Fox News that Steve Scully’s Twitter account has been hacked. The commission did not reveal further details on this matter. Steve Scully himself did not immediately comment on this scandal. Steve Scully had earlier been selected to host the much anticipated second presidential debate.

Steve Scully says, “should I respond to Trump”

Frank Fahrenkopf, a co-chairman of the commission gave the following statement, “Steve is a man of great integrity, okay?” Fahrenkopf said. “I don’t know this question about whether he tweeted something out or not, I do know, and you’ll probably pick up on it in a minute, that he was hacked… Apparently, there’s something new that’s been on television and the radio saying that he talked to Scaramucci… He was hacked. It didn’t happen.”

In response to the scandalous tweet, Scaramucci replied, “Ignore. He is having a hard enough time. Some more bad stuff about to go down.” Scaramucci told Fox News’ Brian Kilmeade that he genuinely thought Scully’s tweet was real, which is what prompted his response to the debate moderator. Scully’s credibility as an unbiased debate moderator has also been challenged before. He is also known to have previously serve as an intern for the then-Senator Biden. Moreover, Steve later served as a staffer for the late Sen. Ted Kennedy, D-Mass.

The alleged fake tweet raised eyebrows of many people. “This is not going to help the idea that Scully is *in any way* an objective and unbiased journalist and moderator,” NewsBusters managing Curtis Houck wrote in a statement. “We need a different moderator at the v least. This is disqualifying,” Rebeccah Heinrichs, a senior fellow at the conservative Hudson Institute wrote.

“It appears that our moderator for the next debate thinks he’s dm’ing with Scaramucci but accidentally tweeted at him. I’m sure he’ll be a fair and unbiased moderator,” Daily Caller’s Greg Price wrote. These statements by prominent media persons indicate that they do not belive the tale that Steve Scully’s account was hacked.

“What? Why is the next presidential debate moderator publicly asking one of Trump’s staunchest critics in Anthony Scaramucci if he should respond to the president? In a related story, Scully once interned for Sen. Joe Biden. Optics here are horrible & underscore mistrust is media,” The Hill media reporter Joe Concha said giving his two cents on the matter.

Many people have demanded that Steve Scully should be removed as a moderator for the next presidential debate. It is likely that his bias will cloud his judgement and hinder the debate from being objective.

With Feeds Overloaded With Ads, Twitter Is Now Testing New Place For The Advertisement: Right In Your Replies