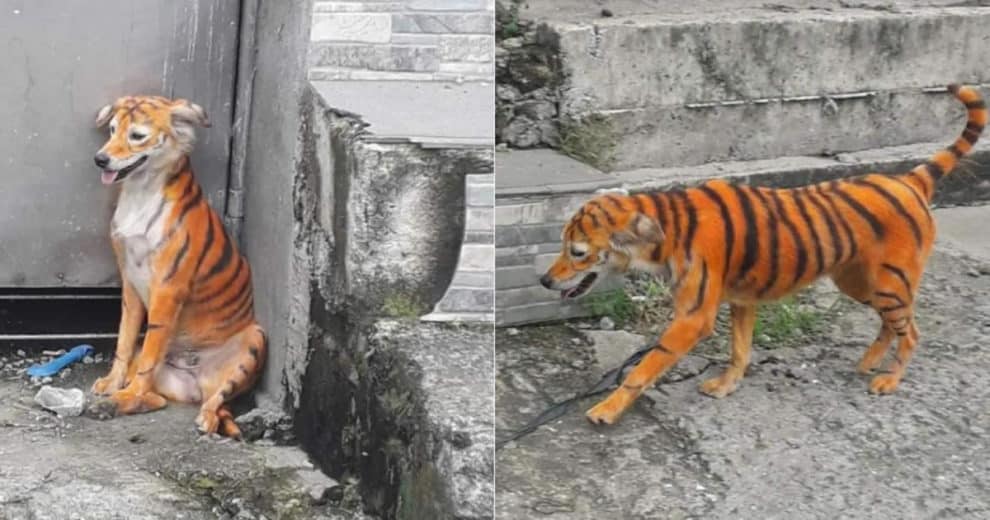 According to the latest report, images of a stray dog in Malaysia, painted with orange and black stripes to look like a tiger, have gone viral on Twitter. Furthermore, these images have now sparked outrage among pet lovers and activists. According to an animal rights group in the country, it’ll offer a reward for anybody that can trace the culprits that painted the dog.

Animal Activists To Reward Anybody With Info Of Culprit

An angry animal rights group posted the images of the dog across various social media platforms, including Facebook. According to the group, called Persatuan Haiwan Malaysia, it’s ready to reward anybody with information regarding the culprit that painted the stray dog like a tiger.

Here’s a translated version of what the Malaysian animal group posted below:

“Help Animal Malaysia find out where it is and who owns it. Mysterious prices await complete informants if they are in the country.”

Surely, you’ll agree that applying paints and dyes on the fur of animals can be very harmful to them. As such, in case you have any information, you can contact the animal rights group, as it’s also added its WhatsApp contact on the post.

Reactions After Stray Dog In Malaysia Painted To Resemble Tiger

As mentioned earlier, the images of the Malaysian strayed dog, painted to look like a tiger, have now raised a lot of comments on Facebook and Twitter. You can have a quick look as some of them below:

According to Prerna Dhall, the user said, it’s a stupid thing to spray chemicals on an animal. Here’s a brief of what the angry Twitter user posted below:

“A stray dog was painted to make it look like a tiger in Malaysia. This is not at all funny, cute, heroic, or whatever the hell these people were thinking before doing such an act.”

Also, according to @ayeshaaref, she said: “Be kinder to animals, please… Don’t take them for granted just because they can’t talk.”