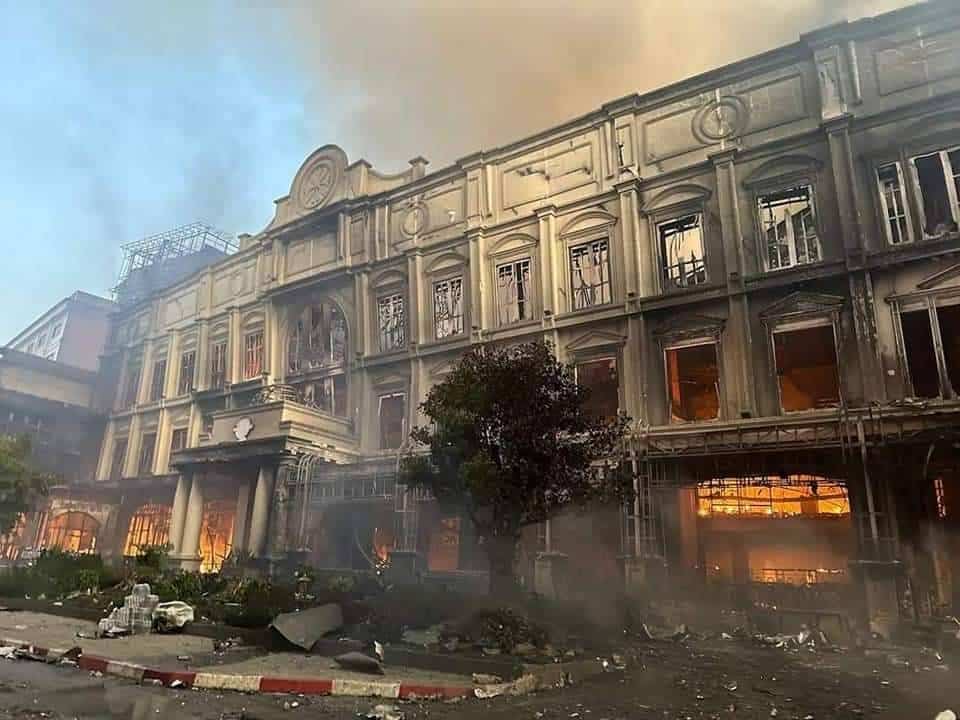 Rescuers scoured the charred ruins of a Cambodian hotel and casino complex Friday as the death toll from a fire that forced people to jump from windows rose to 25.

Hundreds of people are believed to have been inside the Grand Diamond City venue, located in the town of Poipet within sight of the Thai border, when the blaze broke out late Wednesday night.

“The death toll now is around 25,” said Sek Sokhom, director of the information department for the province of Banteay Meanchey, adding that some of the bodies recovered were found in stairways.

Photos and video from the scene showed people huddling on windowsills to escape the flames, with one rescuer telling AFP he saw people desperately jumping from the roof as the blaze inched closer.

Earlier, a Cambodian police officer told AFP they believed “there are many more bodies still trapped inside” as rescuers began entering the gutted complex.

Hundreds of Cambodian soldiers and police officers, along with volunteers from Thailand, are taking part in the search.

Smoke was still occasionally rising from the complex Friday as rescuers prepared to enter the buildings at around 7 a.m., with firetrucks on standby at the scene.

Jakkapong Ruengdech, a team leader with Thai rescue group the Poh Teck Tung Foundation, told AFP they needed to establish if there was still intense smoke or fire inside.

Another rescuer from the group, who asked not to be named, described the building as “unstable” and said the search would have to proceed cautiously.

‘It got huge rapidly’

Many of the injured have been taken to Thailand for treatment, with local officials on the Thai side saying more than 50 had been hospitalized, with 13 in critical condition.

The casino is one of many in Poipet, a border town popular with Thais who face strict restrictions on gambling within their country.

Thailand’s foreign ministry said it was working closely with Cambodian authorities to find and identify Thais involved in the incident and was sending “additional equipment, consular officers and a police attache” to Poipet.

While gambling by Cambodians is also illegal under the country’s laws, numerous casino-filled hotspots have flourished along the borders with Thailand and Vietnam.

A Grand Diamond City worker, who asked not to be named as it might affect her job, told AFP she was working on the third floor of the 17-floor hotel wing when the blaze broke out.

“At first, it was not a huge fire,” she said. But she and a co-worker were soon forced to flee outside when the flames began rampaging towards them.

“It got huge rapidly,” she said, still in a state of shock over the death and destruction.

Cambodian Prime Minister Hun Sen on Friday expressed condolences to the families of the victims, calling it a “tragedy.”

On Thursday, Thai rescuers had been forced to call off their efforts as night fell, with an officer from the Ruamkatanyu Foundation saying conditions were too dangerous to continue.

Around 100 rescuers had swarmed the complex throughout the day, some in heavy protective gear, in search of survivors or bodies.

But they struggled to reach some parts of the casino.

There is as yet no indication what caused the blaze, the latest in a series of fires that have struck popular entertainment establishments in the region.

In August, a fire in a Thai nightclub killed 26 people and injured scores more, while a blaze in a Vietnamese karaoke bar killed 32 people the following month.

Concerns have long been raised over a lax approach to health and safety regulations in parts of Southeast Asia, particularly in the region’s innumerable bars, nightclubs and other entertainment venues.

Lightning strikes killed 63 in Cambodia in 2022, 24% down from previous year